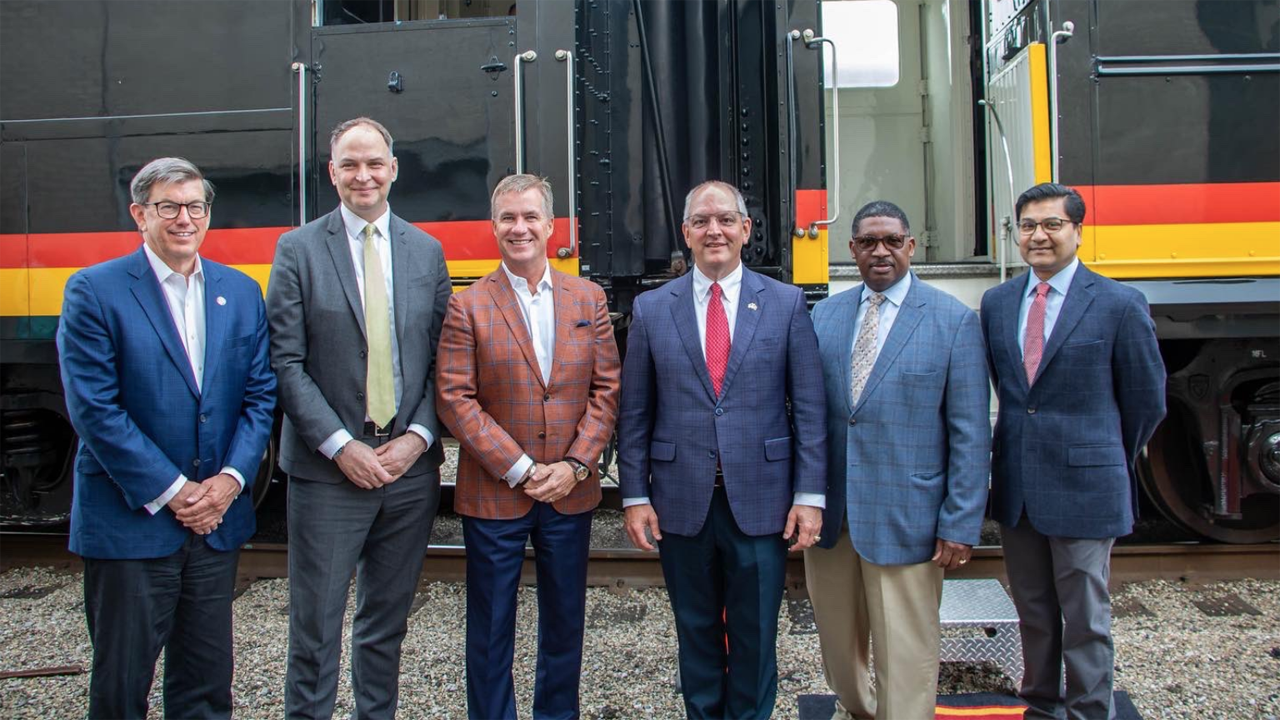 (Scroll down for aerial videos of trip.)

Amtrak does not currently offer rail service between Louisiana’s capital and the “Big Easy,” but under its 2035 plan, it could implement it with funding provided under the Infrastructure Investment and Jobs Act (IIJA), signed in November 2021. The last passenger train between the cities was Kansas City Southern’s (KCS) Southern Belle, which was discontinued in 1969, one year before Amtrak’s creation.

Amtrak’s preferred route would follow the KCS line between Baton Rouge and the Louis Armstrong New Orleans International Airport, and then the CN line from the airport into the Union Passenger Terminal in downtown New Orleans, which is served by the Sunset Limited, City of New Orleans and Crescent trains as well as intercity buses.

Canadian Pacific (CP) is among those supporting the project. On Jan. 6, the Class I railroad announced its commitment, subject to Surface Transportation Board approval of the CP-KCS merger; it could potentially host one round-trip per day. And Louisiana’s most recent State Rail Plan identified the 80-mile corridor as the state’s “highest priority passenger rail route.”

The Southern Rail Commission, an interstate compact of Louisiana, Mississippi and Alabama, in 2019 initiated a poll with the Baton Rouge Area Chamber and GNO Inc. to gauge residents’ support for passenger rail between Baton Rouge and New Orleans as a part of broader Gulf Coast service. It found that “75% responded favorably to the idea and 85% of respondents said that having passenger rail service between New Orleans and Baton Rouge is very important or important to them,” according to the Commission’s website, which noted that a feasibility study completed in 2014 estimated the Baton Rouge-New Orleans project’s price tag to be $260 million.

“The impending merger between the Kansas City Southern and the Canadian Pacific railways provides opportunities and renewed support to introduce the first-ever Amtrak service between Baton Rouge and New Orleans,” Gov. Edwards said during the April 20 inspection trip. “An Amtrak line connecting Louisiana’s capital to the largest metropolitan area in the state will have immense economic benefits for both cities and the parishes in between, allowing the state to compete with other major metropolitan areas. Not only will this service potentially reduce the number of vehicles on the roadways which will result in less traffic congestion, but it will also connect communities through employment opportunities and allow for more transportation options for festivals, sporting events, and concerts.”

“Last year, Congress passed the Infrastructure Investment and Jobs Act, which will allocate nearly $6 billion to infrastructure projects in Louisiana,” Louisiana Department of Transportation and Development Secretary Shawn D. Wilson said at the event. “This historic investment from the Biden Administration will aid the state in making the first steps to making the intercity rail from Baton Rouge to New Orleans a reality.”