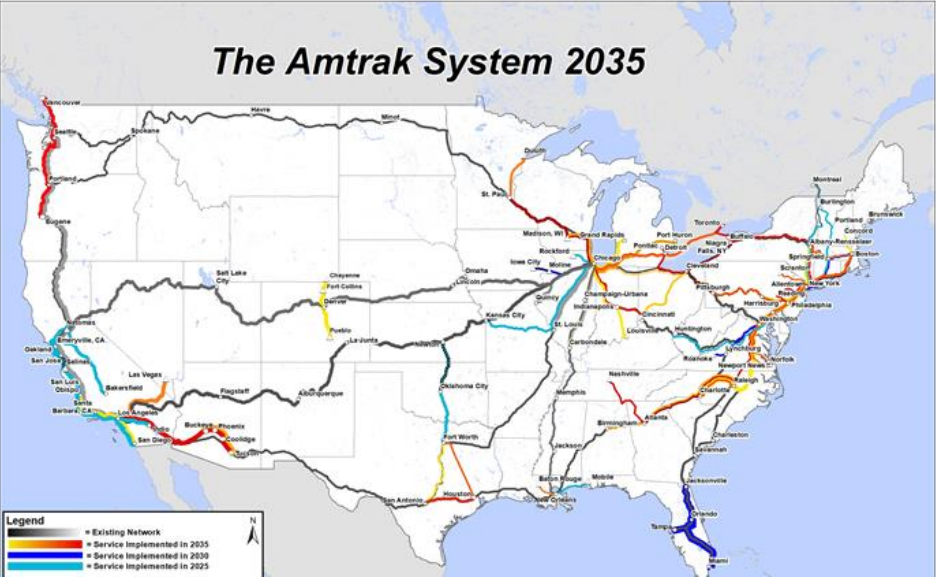 As Amtrak marks its 50th anniversary, many are reflecting on the railroad’s past half-century and wondering how it will do in the next.

“America’s Railroad” recently released a map showing the services it would like to offer by 2035; 14 years from now. As planning frontiers go, that is not a very long time. For us seniors, who remember the entire Amtrak era, it feels like an eternity; far beyond our lifetimes.

Everybody seems to be talking about the plan. One advocate called it “propaganda.” while Railway Age Editor-in-Chief William C. Vantuono called it “an optimistic wish list.” Both views have merit. Advocates’ hopes for a strong, robust and expanded Amtrak have been dashed time and time again over the past five decades. Under current circumstances, though, Vantuono’s view deserves consideration. At least Amtrak is thinking about expansion, which “hasn’t happened for the longest time,” to quote Billy Joel.

So, even acknowledging the lifelong frustration that many advocates feel and express on their blogs, it makes sense to give Amtrak the benefit of the doubt this time, and hope that our national railroad can actually expand its skeletal network. It won’t be easy. There are daunting challenges: political, economic and statutory. It will indeed be difficult for Amtrak to overcome the formidable forces that have kept it confined through the years, and the question is whether Amtrak can build the coalition that could not only make the 2035 map a reality, but also add other trains to fill out an extensive national network. That appears unlikely at the moment, but Amtrak is at least daring to dream, for the first time since the turn of the century. Most of the long-distance trains are returning to daily operation soon, too. That is a vital step, without which any hope of growing the network at all would have been impossible.

Amtrak spokesperson Marc Magliari explained the light blue and orange indications on the map, confirming that the light blue lines meant trains and not merely bus connections, a reassuring step in the right direction. He also said that “enhanced” service could mean more daily frequencies, higher speeds or new equipment, apparently advising us to construe the word “enhanced” broadly.

We have heard this before. Twenty years ago, John Robert Smith, Chair of the Amtrak Board at the time, explained his expansion plans for Amtrak to me over lunch at Weidmann’s, the historic restaurant in Meridian, Miss., where he was also serving as mayor. He had good ideas: a section of the Crescent splitting at Meridian and going through Jackson and Vicksburg to Dallas; running one of the New York-Florida trains on the Florida East Coast south of Jacksonville, among several others. Amtrak route maps showed them in yellow as “future service” lines for a few years, but none were ever implemented, and now they can’t be. Instead, the statute changed and effectively prohibited such expansion.

That was PRIIA, the Passenger Rail Investment & Improvement Act of 2008. It defined the “national network” of routes more than 750 miles long that were operating at the time, effectively freezing it until Congress decides to thaw it out. That’s why the map almost shows a re-routed Floridian between Chicago and the Sunshine State, with a train-less gap between Louisville and Nashville. That is why only one route that had been discontinued is now shown on the 2035 “wish list” map. If the Heartland Flyer is extended northward from Oklahoma City to Newton, Kan., a rider could take a trip between Chicago and south of Fort Worth, mostly on historically Santa Fe track, but with two transfers, rather than through-running equipment. For several years, BNSF has wanted more money to allow a train on that segment than Oklahoma is willing to pay, so that “segment” is now a bus ride. Would the feds use infrastructure money to satisfy BNSF’s demands? Time will tell. That’s an exception, and an example.

As long as the PRIIA definition of the “national network” includes only routes at least 750 miles long that operated in 2008 (codified as 49 U.S.C. §23401(C)(7)), there can be no additional long-distance routes. There can be new state-supported routes, and it appears that many of the new starts proposed on the map would fit into that category, but there is a caveat: The states that support a train must pay the entire cost, after getting some help from Amtrak for the first few years of operation.

Without plans for new long-distance routes, there is no choice but to place the emphasis on short routes that do not cross state lines or may cross only one. Magliari told Railway Age that the routes outlined in the 2035 plan came mostly from state rail plans and reports from other quasi-official bodies like the Southern Rail Commission in the Gulf Coast states. Still, there is one important constituency that Amtrak may not have consulted when drawing its map: the advocates for the nation’s rail riders.

Throughout the years, advocates have been pushing for expansion of the nation’s passenger train network, from more long-distance routes, to expanded corridors, to new starts and expanded services on local passenger railroads. The National Association of Railroad Passengers (NARP, now the Rail Passengers’ Association, RPA) proposed its own “Grid and Gateway” map several years ago, an augmented national network that would restore a number of trains that were discontinued in the 1960s. The Rail Users’ Network (RUN) has called for the restoration of trains that were once part of the Amtrak system but were eliminated, starting in 1979, as well as for other new long-distance trains and corridors.

These groups and their members should be included in future discussions about expansion. So should local and state-level advocacy organizations., which have also proposed routes that deserve consideration, from the Maine Rail Group’s proposals for service north of Brunswick to Augusta and Lewiston-Auburn, to a proposal by Rails, Inc. in New Mexico for a Rocky Mountain Flyer from El Paso to Denver through Albuquerque, and perhaps further north to Montana.

At the present time, the trend in state-supported trains does not point toward growth, but toward retrenchment. Except for the Downeaster corridor between Boston and Maine, every state-supported corridor hosts far fewer trains than before the virus hit, and it is unclear how many will return to the rails after the dust settles. The States are in financial trouble, and the public sector is contracting fast. Even elected officials who would like to keep the trains running can always find more-urgent spending priorities. We don’t even know if the state-supported trains that ran until March 2020 will ever return. The situation would probably be far worse for potential restoration of service on routes that have not run for half a century or longer, especially considering the cost of the required capital improvements.

Some of the proposed improvements would entail adding more trains to existing corridor-length routes. These changes would be welcome, but corridors outside the Amtrak-owned Northeast Corridor (NEC) face the same problems as existing or proposed state-supported corridors and trains. How long can a state afford to keep supporting a train when tax revenue declines but financial obligations continue? We seem to be getting the answer, and there is not much to like. Indiana killed the four-day-a-week Hoosier State in 2019, before the virus hit. One of the two daily round trips between St. Louis and Kansas City has been a casualty of the virus, and it probably will not come back. The Heartland Flyer seems to live perpetually on borrowed time. Corridors elsewhere offer the lowest level of service ever.

Against this grim backdrop, there is still some reason for hope in the long term, but it appears that there are three vital steps that must be taken to plan and build the sort of network of long-distance trains and corridors that the nation needs and deserves. Indeed, it may not even be possible for Amtrak to implement its 2035 map without taking these steps.

First, Congress must repeal the PRIIA definition that effectively prohibits growth of the long-distance network. That limitation came during the Bush Administration and was left intact during the Obama-Biden and Trump Administrations. The time may now be ripe for the nation’s elected officials to permit Amtrak’s long-distance network to grow, which would allow the country’s residents and visitors to enjoy a wider selection of travel destinations than they currently have.

Second, Amtrak must develop a program and funding formula that encourages states to participate in supporting the sort of new starts represented by the light blue lines on the map. Under the current formula, the states must pay more to keep their trains and corridors going than many of them can afford these days. It may require help from Congress to enact a formula for federal assistance in building and operating state-supported trains and corridors in the future. That formula should be at least as generous as the one that offers a federal share for highway construction and new starts for local transit.

Third, Amtrak should move beyond its contacts with state officials and quasi-governmental groups, and expand its planning to include rider-advocates as genuine stakeholders. The leaders and board members of RUN and RPA are experienced advocates who are well-informed on rail issues and can act as the bridge between Amtrak and its passengers. Advocates at the state level, and regional levels within a state, know their train-riding neighbors and have been pushing for regional corridors and better connections between Amtrak and local rail transit for decades. Not only do the advocates deserve a seat at the table when decisions are made, but they also have knowledge gained outside the political system—knowledge that is useful, but which politically beholden organizations like Amtrak do not have.

While Amtrak’s proposal is a good start, there is no time like the present for refining and expanding it. For the sake of the environment, community mobility and local economies in our cities and towns, it is now time for the next step: to expand the initiative. Rider-advocates and state officials need to keep pushing. Amtrak might even be on board with that, as well. Spokesperson Marc Magliari seemed genuinely upbeat about Amtrak’s expansion plans throughout our interview. That’s a good sign.