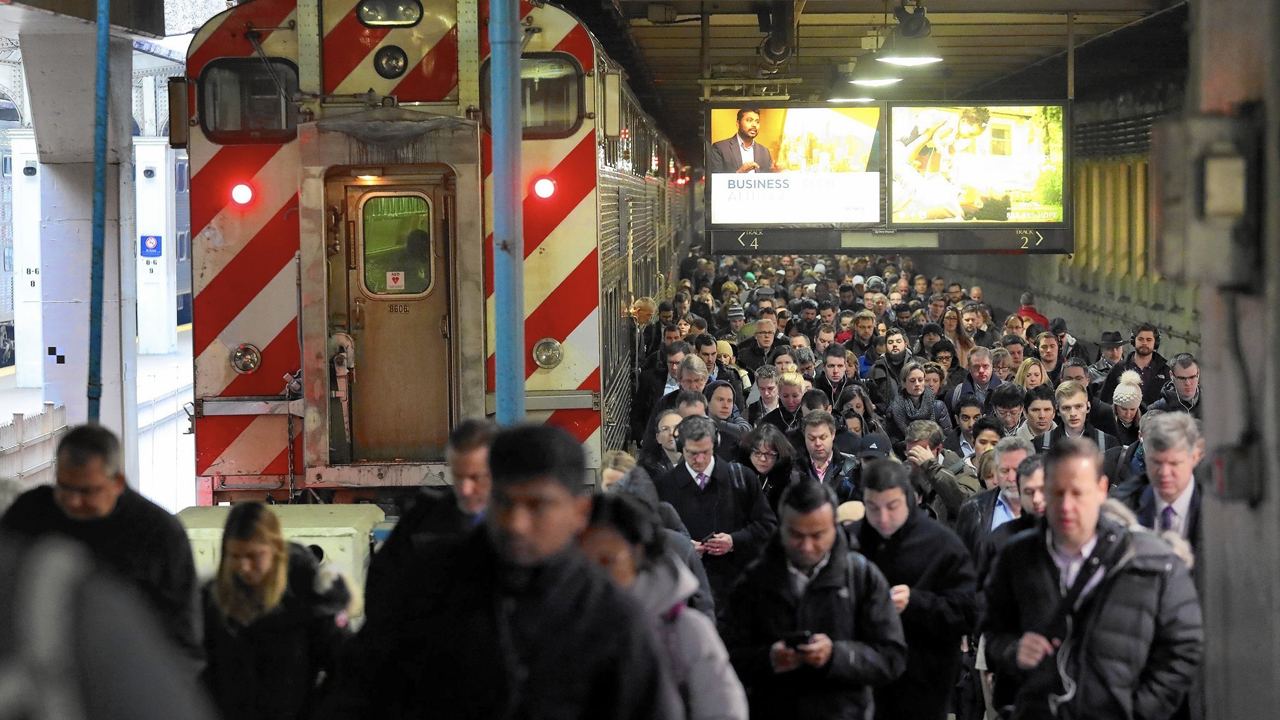 Amtrak recently completed a $22 million restoration of historic Chicago Union Station’s Great Hall, including refurbishment and modernization of the skylight. Amtrak calls this project a “good start” to further improvements at CUS. However, the good start has very little to do with how the station actually operates.

Most of the action that makes a station what it is takes place on the tracks where the trains load and unload, and on the concourses that funnel the passengers to and from their trains. At Chicago Union Station, these areas simply do not work, and even if the station were returned to its pre-1969 configuration, with the great concourse between Canal Street and the River still open, the station would still be punching below its weight class because the south tracks do not connect with the north tracks, limiting train capacity, passenger capacity and the station’s suitability to serve a modern commuter and intercity passenger train system.

CUS remains the only double-stub railroad station in the world at a time when both Metra and Amtrak should be running their trains through downtown Chicago instead of stopping them there, turning them around and servicing them on nearly one square mile of what otherwise would be prime commercial and residential real estate bounded by Harrison Street, 16th Street, Canal Street and the Chicago River. The office building at 222 S. Riverside Plaza needs to be demolished so CUS can be reconfigured into an “over/under” through station with a street-level concourse occupying the block between Adams and Jackson and Canal Street and the River, with escalators and elevators carrying passengers and luggage between the concourse above and the platforms below.

In its current double-stub configuration, CUS is pretty much at capacity. Were the dream of a stronger Midwestern passenger rail system to materialize, it would crush the facility. It would not take 220-mph high-speed rail to bring this nightmare about, only incremental upgrades to the existing system.

Imagine 110-mph track all the way to Detroit and St. Louis, with each end point only 3-1/2 hours away and places like Springfield and Kalamazoo only a 90-minute ride from Chicago and each line carrying 10 round trips per day—a very modest advance beyond the existing scenario. Two trains would probably arrive from each end point during the morning commuter rush hour, and two more probably would leave during that time, each carrying 400 or 500 passengers. Where would you put those trains and passengers? There simply is no more room to process the crowds.

At least the local commuters know how to get out of the station and over to their offices. But what do you do when 400 or 500 clueless people from St. Louis, Springfield, or Kalamazoo get off a train and start trying to find a way out of that hole when the crowd is so dense you can’t read the signs or see which way the arrows point? And how are the 400 or 500 passengers trying to board an outbound train supposed to get down to their platforms between 7 a.m. and 9 a.m. when all the escalators, save one (in an obscure location), are programmed to operate up-bound?

The worst thing that could possibly happen to Chicago Union Station is improved intercity train service. It would crush both the train-handling and crowd-management capacity of the station as currently designed.

The only “plan” that currently purports to deal with additional trains and crowds is to create a through operation at the far eastern side of the depot using some of the track under the old Post Office, which passengers would access through an underground passageway formerly used as a steam tunnel. The passengers would reach their trains after a block-long walk through the tunnel, and some trains would be able to pass through the station using two tracks under the Post Office that merge into one track through the north half of the station—too little space to provide any serious relief to the crush of trains or fully exploit the footprint for through operation. And getting the passengers out to the platforms would be like performing a tonsillectomy through the navel. It would be a stunt, not a solution.

Solving the Chicago Union Station problem and realizing its full potential will require something Chicago has never faced before: dismantling a skyscraper. The owners of 222 S. Riverside Plaza would have to be bought out and its leases wound up, a hugely expensive and complicated set of processes, and then the whole 35-story building would have to be taken down and the property taken off the tax rolls so that a new station (and possibly a new office building on top of it) could be created.

Nothing on this scale has ever been discussed seriously by Metra, Amtrak, the Chicago Department of Transportation or the city’s MPO, the Chicago Metropolitan Agency for Planning. Leaving the station in Amtrak’s hands would only retard the necessary planning, especially in view of Amtrak’s continuing unresolved status and prospects. The city and state probably should create a special government agency—call it the Metropolitan Surface Transportation Facilities Authority—to buy the station and secure the necessary financing for its reconstruction, reconfiguration and operation.

But that’s getting way, way out in front of things. First, we have to admit that CUS doesn’t work. Then we have to develop a plan to make it work. Until then, restoring the skylight, polishing up the statues and improving the shops and restaurants are the best we can hope for. Chicago Union Station is becoming a nicer place in which to dine or shop, but an increasingly difficult place to catch a train.

Editor’s Note: Railway Age contributor David Peter Alan comments: “Fritz Plous raises a much broader issue, and that is who governs our train stations and how they work, how they interface with local transit, and how they get riders between the trains and their actual destinations within the city. We in the New York and New Jersey area are deeply concerned with similar issues at Penn Station New York with the proposed Gateway Project, which is now slated to cost $30 billion or more, and has a number of undesirable features.

“An even larger problem is that all decisions are made by ‘insiders’ who have sufficient money and political clout that that are considered ‘stakeholders.’ The riders, who should be the primary and intended beneficiaries of anything that is done around train stations, are considered mere ‘consumers’ or ‘incidental beneficiaries’ of what the transit agencies or planners do. We have no voice and, as I have said many times, ‘If you’re not at the table, you’re on the menu.’ Until there is serious restructuring of the entire process for making transportation decisions, including reform of the MPOs, our mobility will be constrained by station capacity limited by inept or intentionally indifferent planning.”