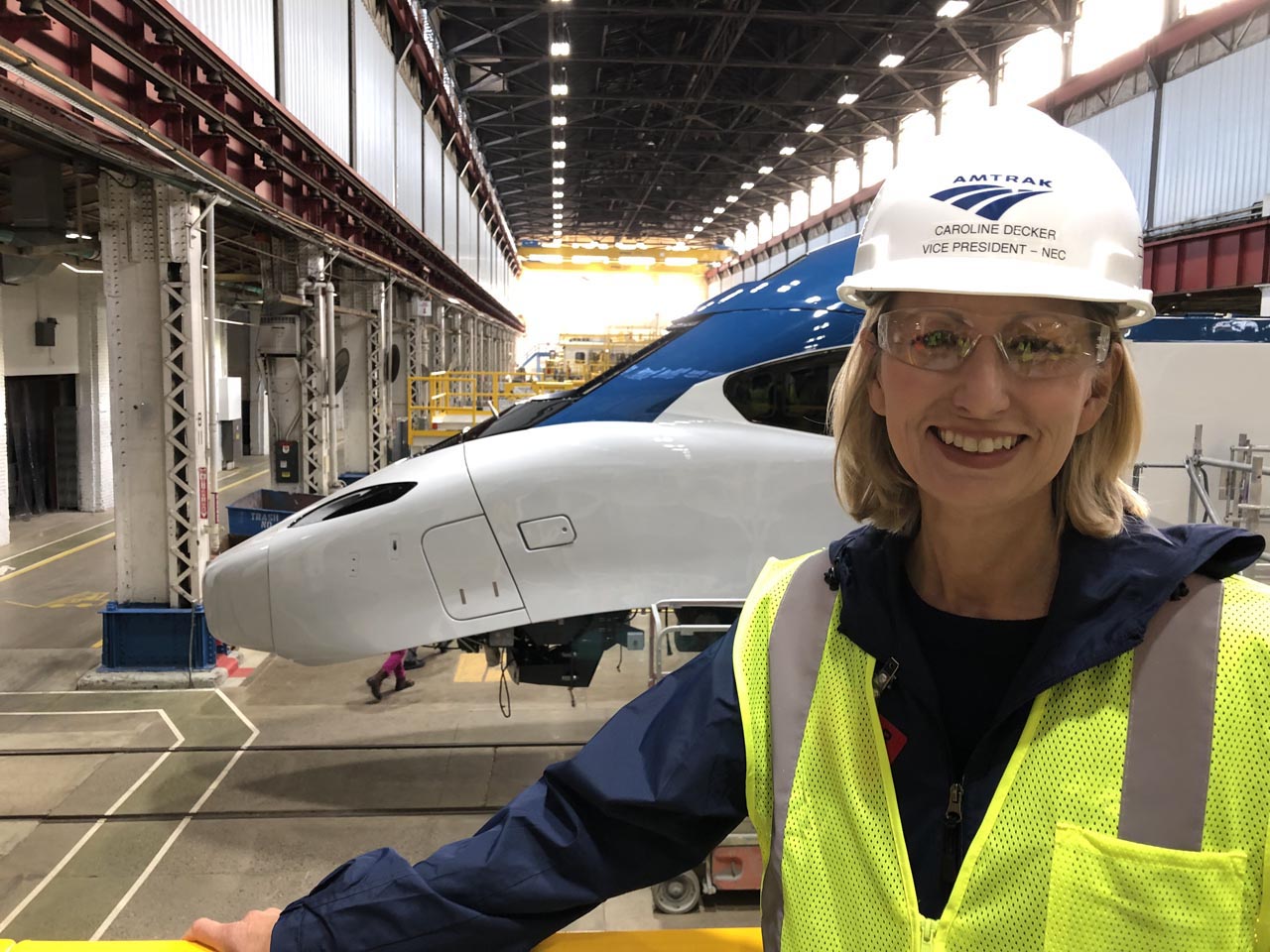 RAILWAY AGE AT THE ALSTOM MANUFACTURING FACILITY, HORNELL, N.Y., JUNE 12, 2019: Alstom Transportation is building the next generation of high-speed trainsets for Amtrak‘s Northeast Corridor Acela Express service. The new equipment is scheduled to enter service sometime in 2021 between Washington, D.C. and Boston.

Amtrak says that this equipment will provide a smoother and more comfortable ride than what it is replacing. Each trainset will have 378 seats, with such amenities as personal power outlets, USB ports and adjustable reading lights. There will be an onboard information system providing real-time information such as location, train speed and conductor announcements. Part of the full ADA accessibility will be spacious restrooms with a 60-inch-diameter turning radius to accommodate people in wheelchairs. Amtrak will be implementing an advance seat reservation system. Food service is described as “contemporary, offering easy access and greater selection.”

Twenty-eight of these trainsets are under construction, and Amtrak has created a microsite with photos and facts about the new trainsets. They are much lighter than the current equipment, with 17-metric-ton axle loads. The power cars are constructed of carbon steel; the coaches of aluminum. The trainsets meet FRA Tier III Passenger Equipment Safety Standards; Standards for Alternative Compliance and High-Speed Trainsets.

Here is a close look at this equipment under construction. 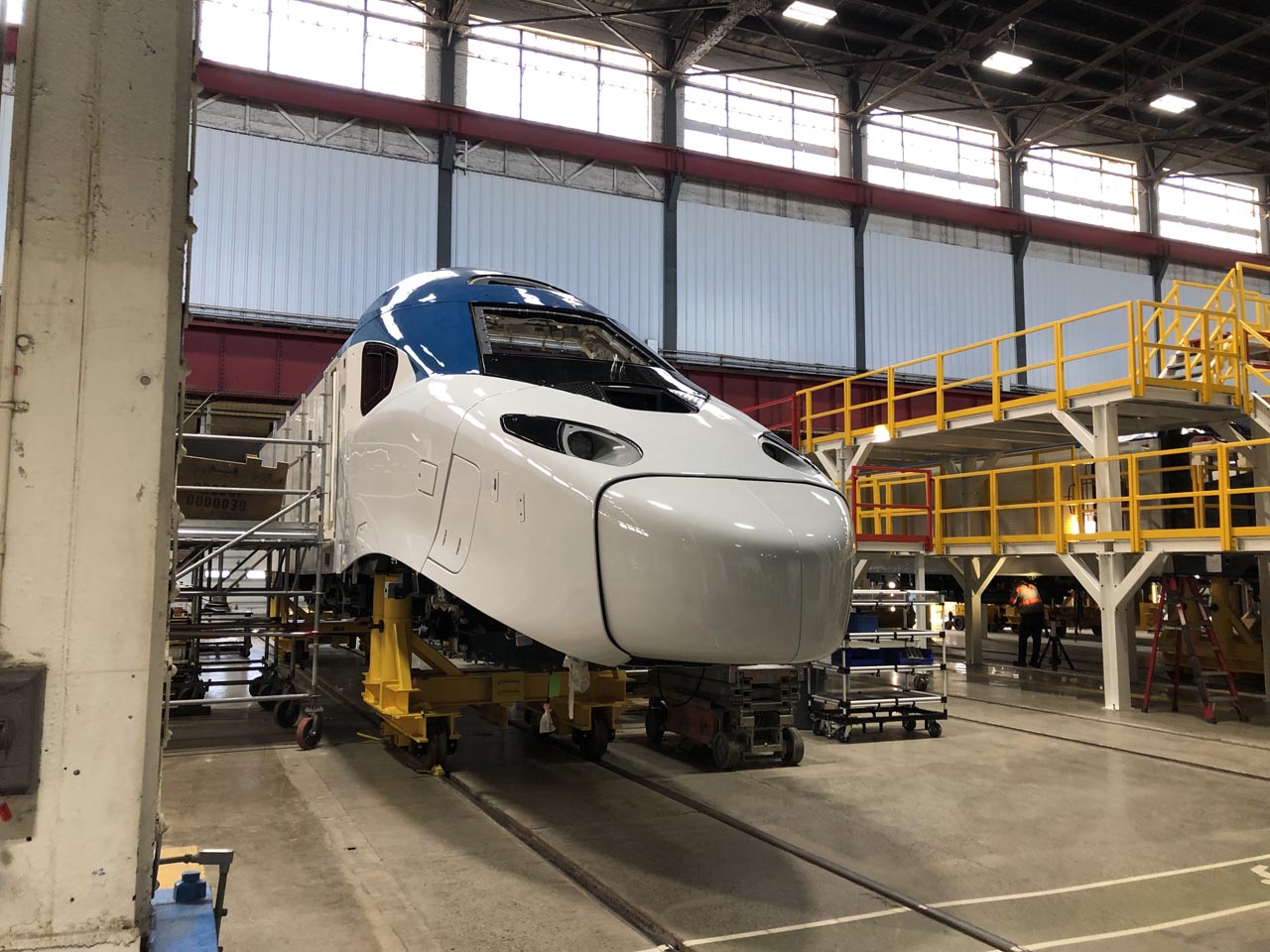 Power car under construction. Each trainset will consist of two power cars (one at each end), seven business class coaches, one first class coach and a café car. Amtrak has ordered 28 trainsets. They are expected to enter revenue service on the Northeast Corridor beginning in 2021. 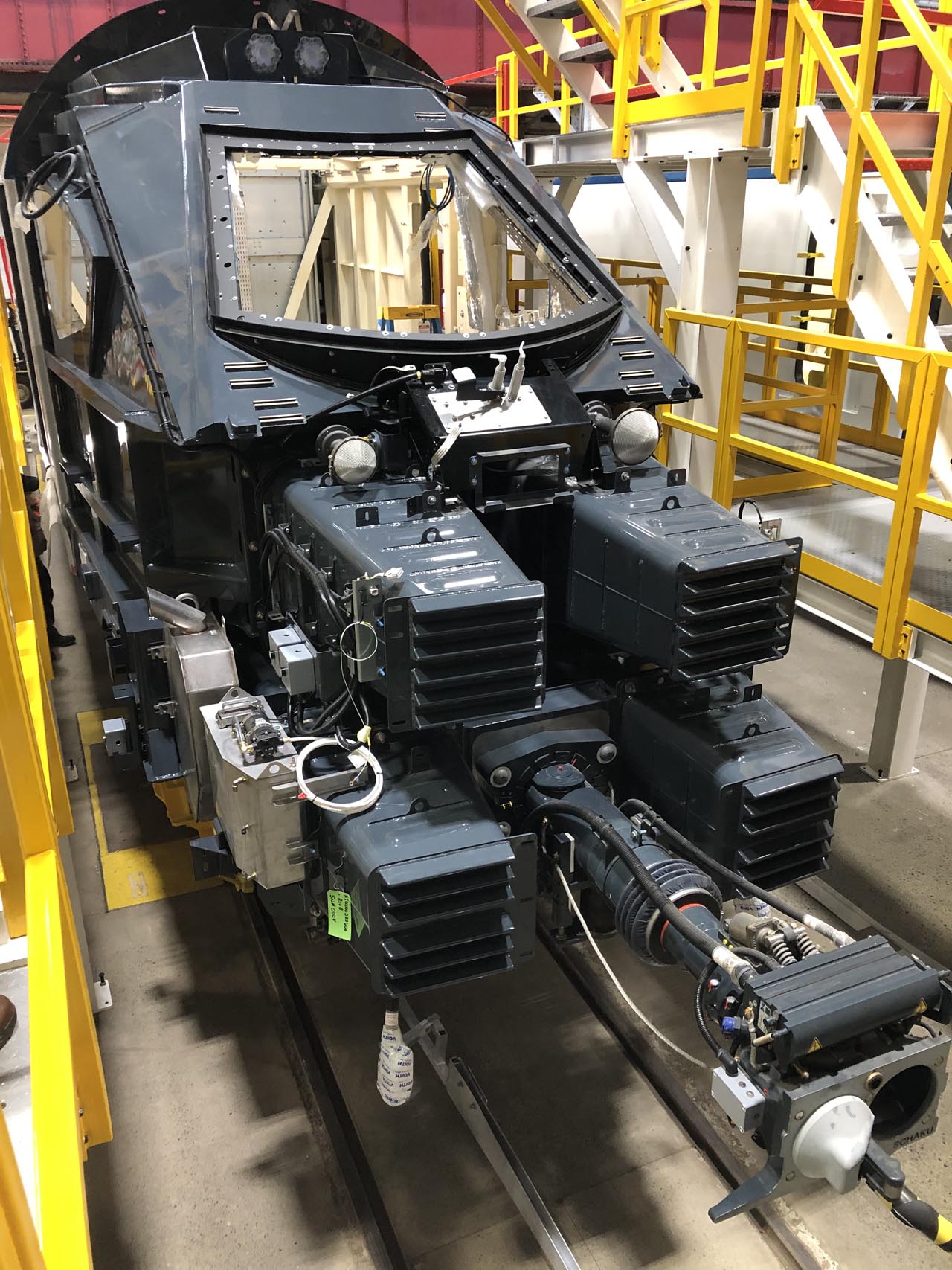 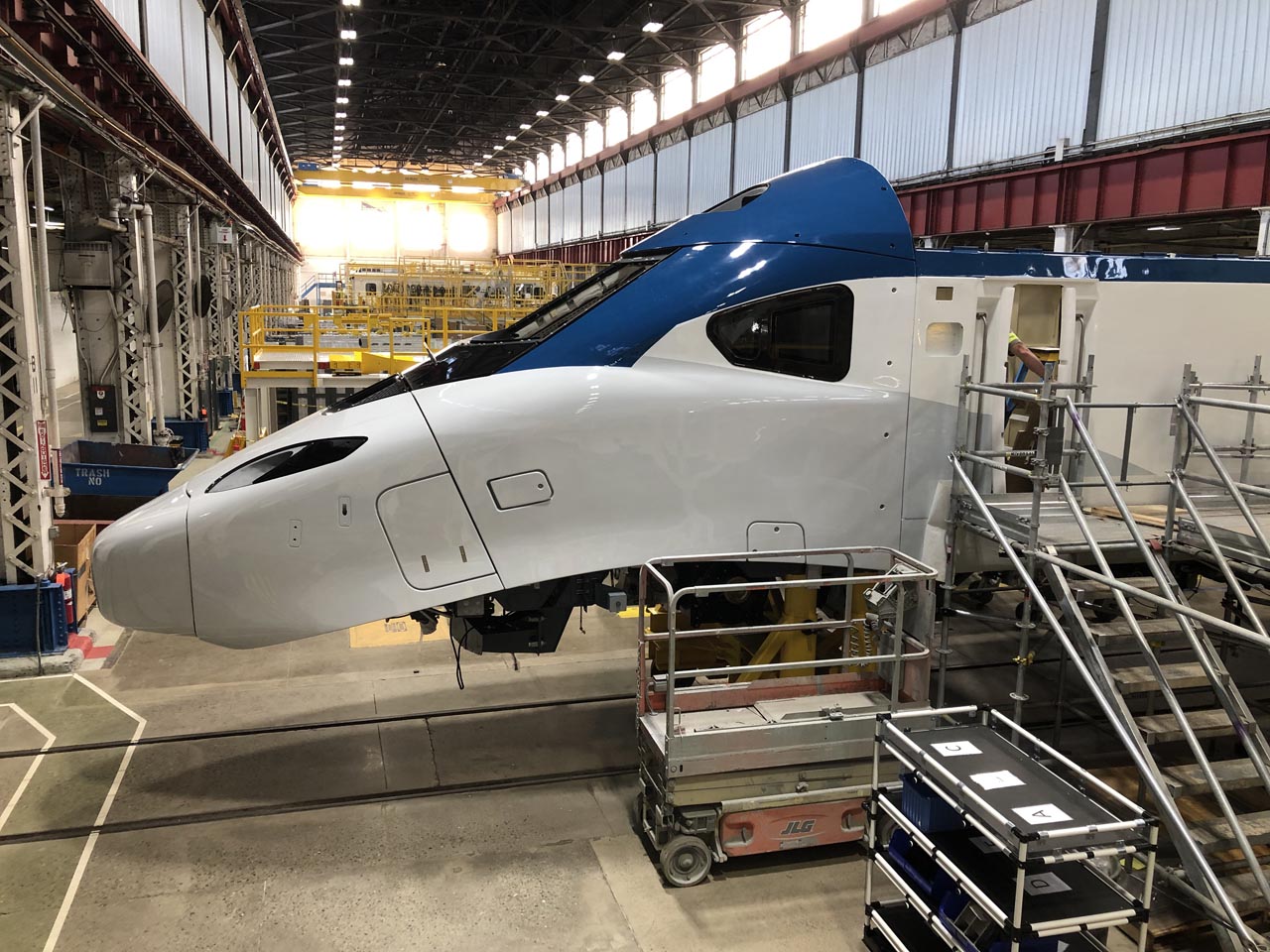 The nose is similar in appearance to Alstom’s AGV high-speed trainset. 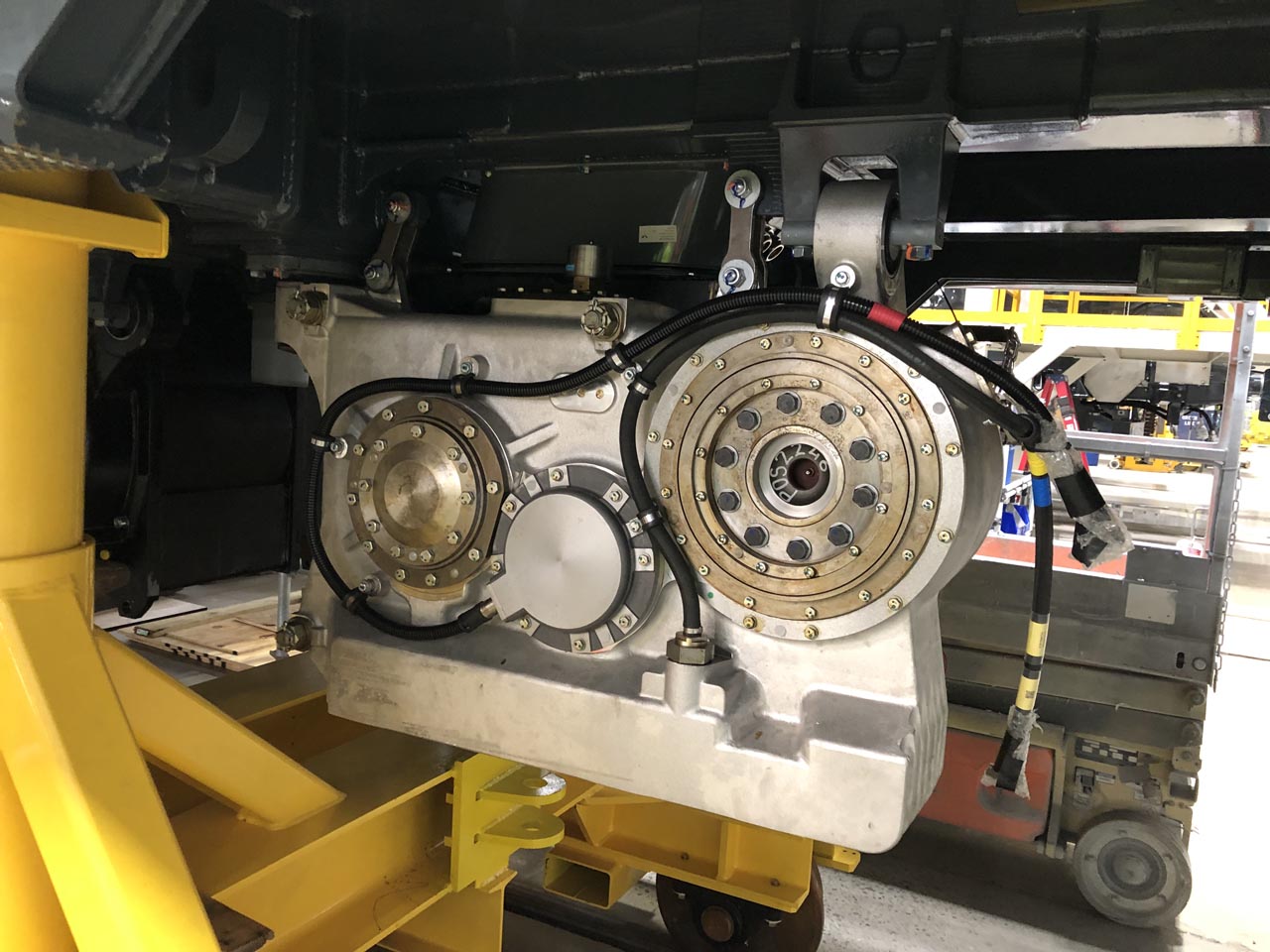 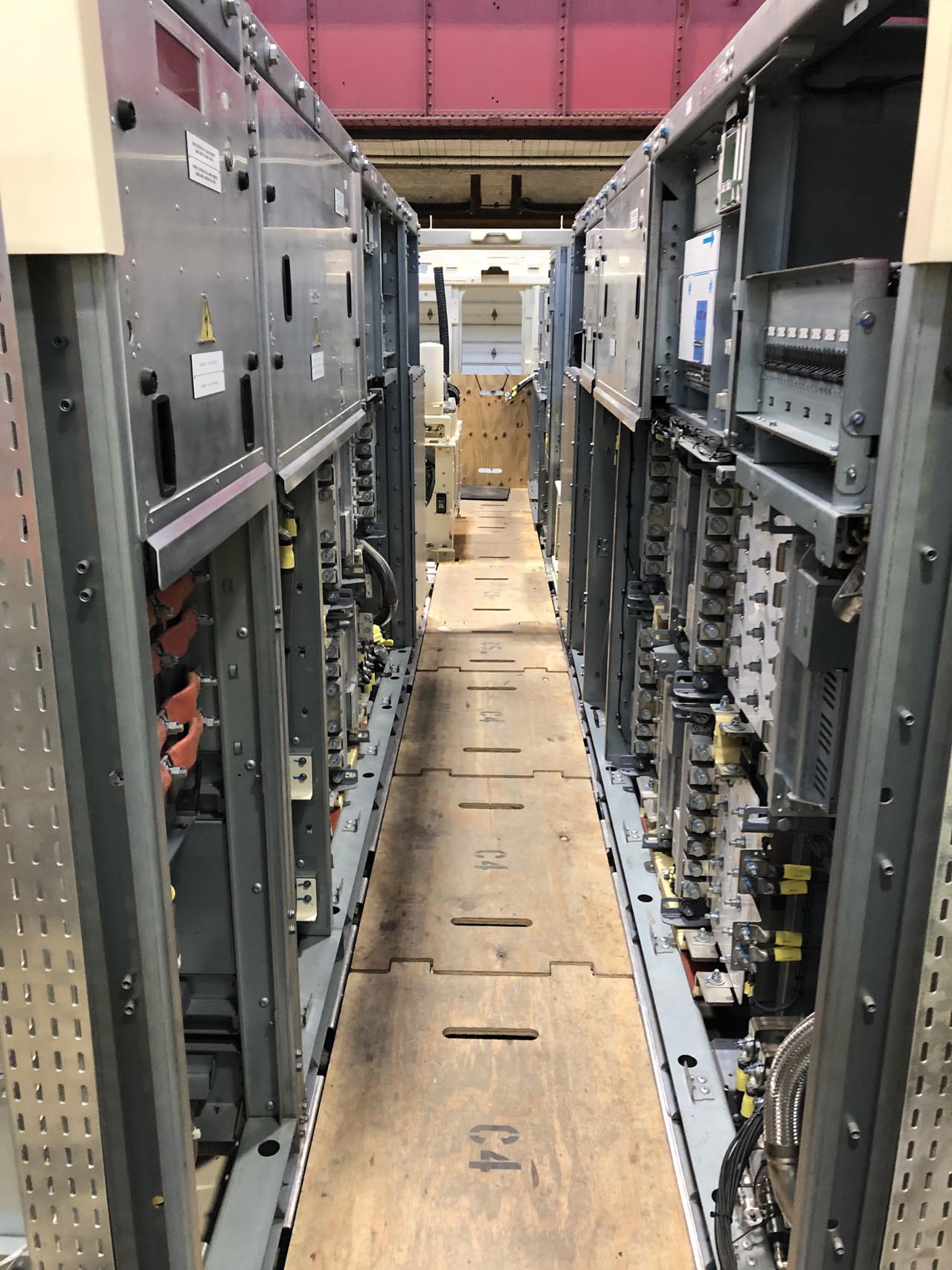 The power car electrical cabinets that house traction power equipment and other systems are easily accessible by maintenance personnel. They are configured on both sides of a wide center aisle occupying most of the length of the car behind the cab. 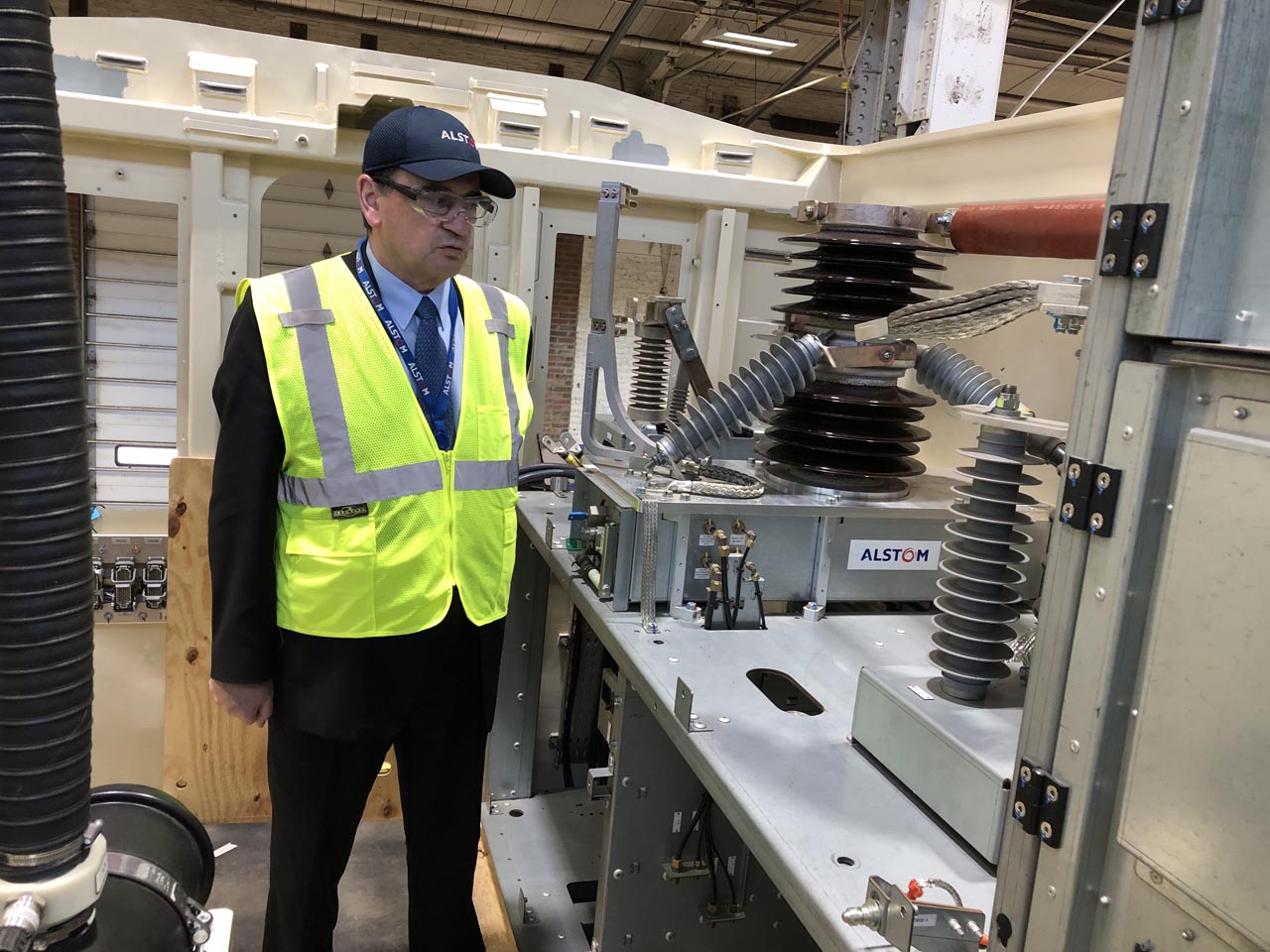 Alstom Transportation Project Director Didier Cuadrado explains the electrical gear that takes 25,000 VAC off the catenary and feeds it to the traction power system. 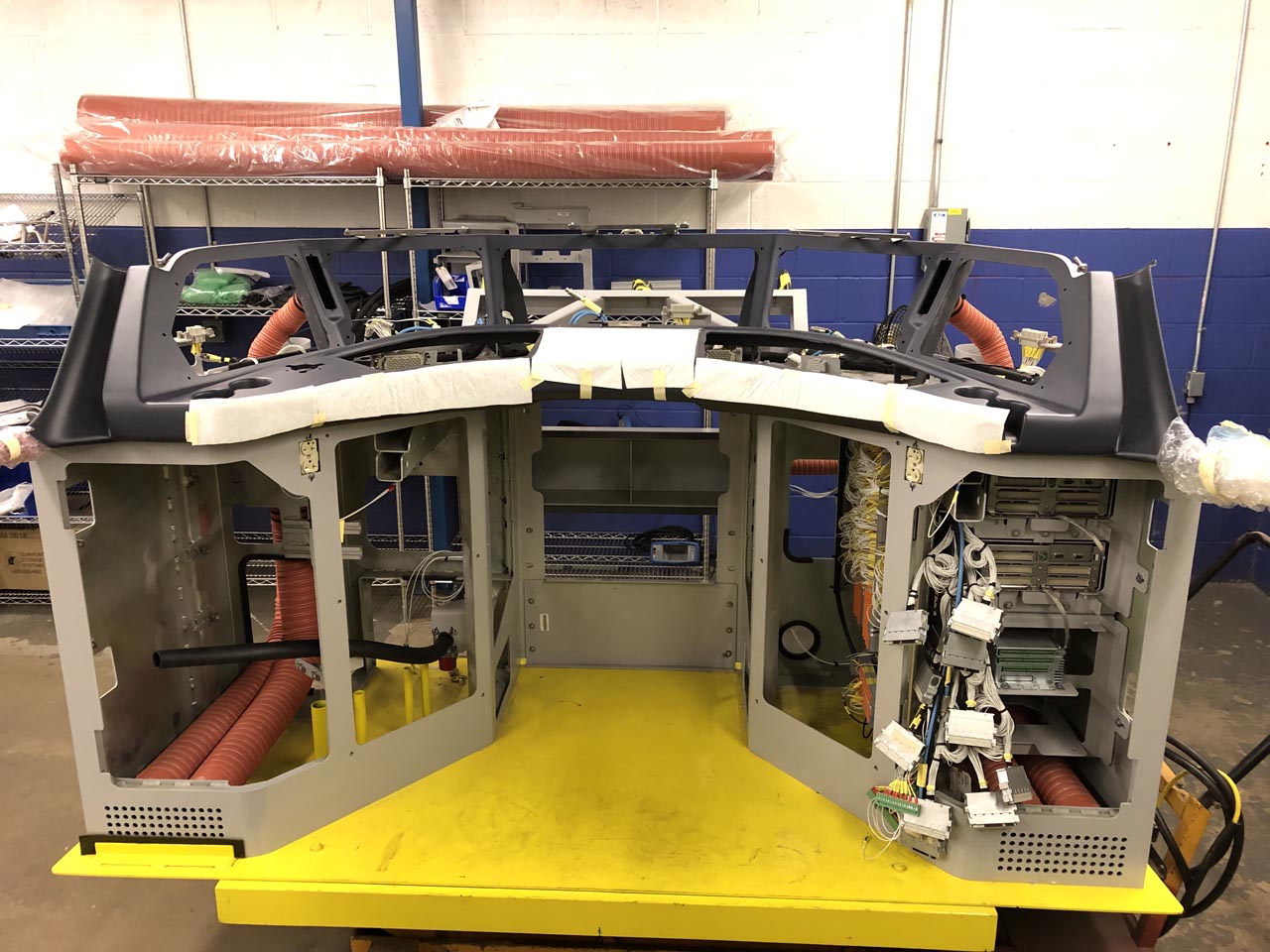 Engineer’s console under construction. The operating position will be centered. 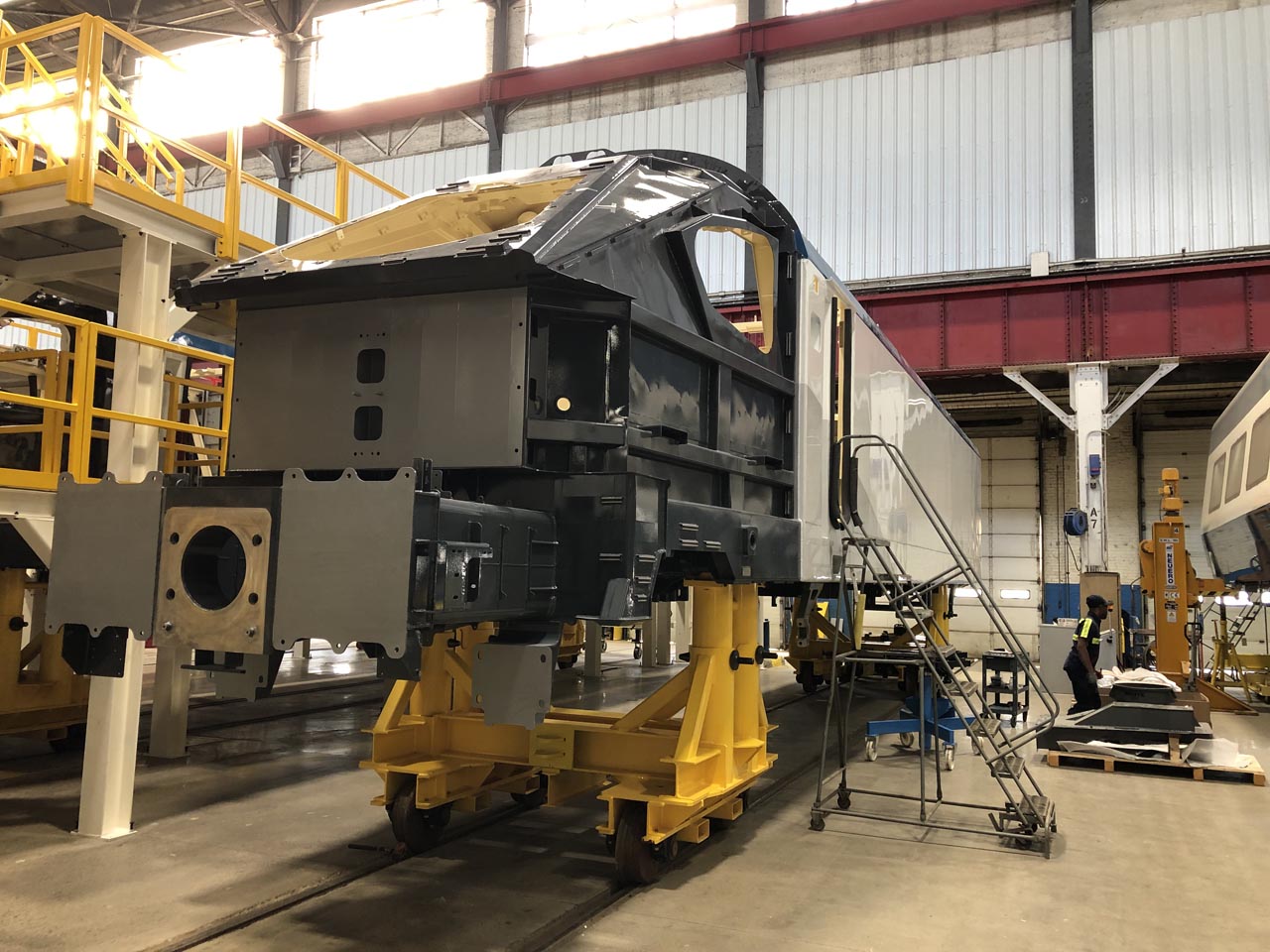 One power car at this stage of construction will be undergoing compression testing at TTCI in Pueblo Colo. 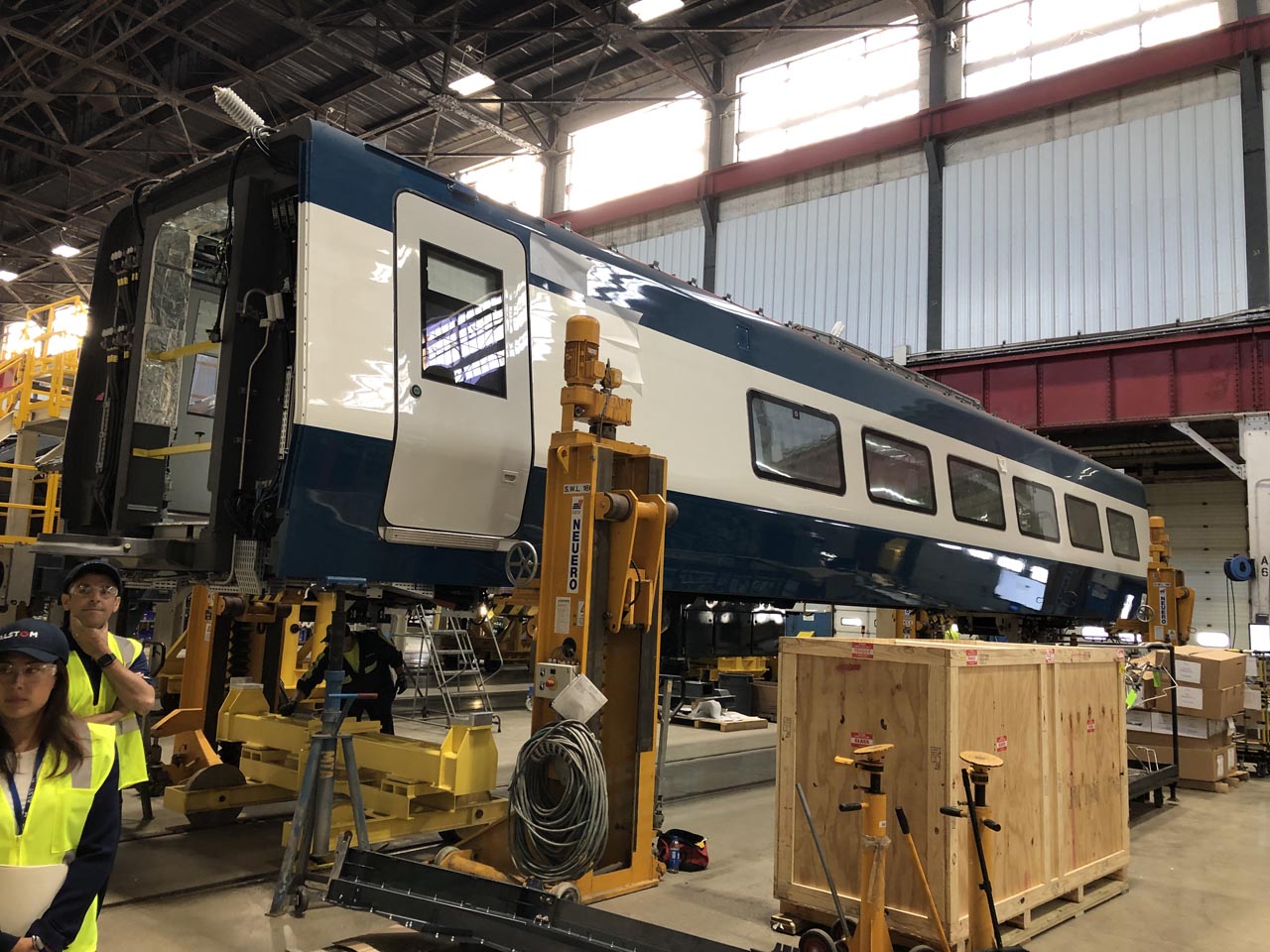 The trainset is articulated, with coaches sharing a common truck (like the French TGV), thereby improving ride quality, stability and safety. Business class coaches will have gray doors; first class coaches will have red doors. The windows are somewhat taller than those in the existing Acela Express equipment. The blue and white livery is a bit on the retro side; it looks close to the blue and cream of the famous Central Railroad of New Jersey Blue Comet that operated between Jersey City and Atlantic City in the 1930s. 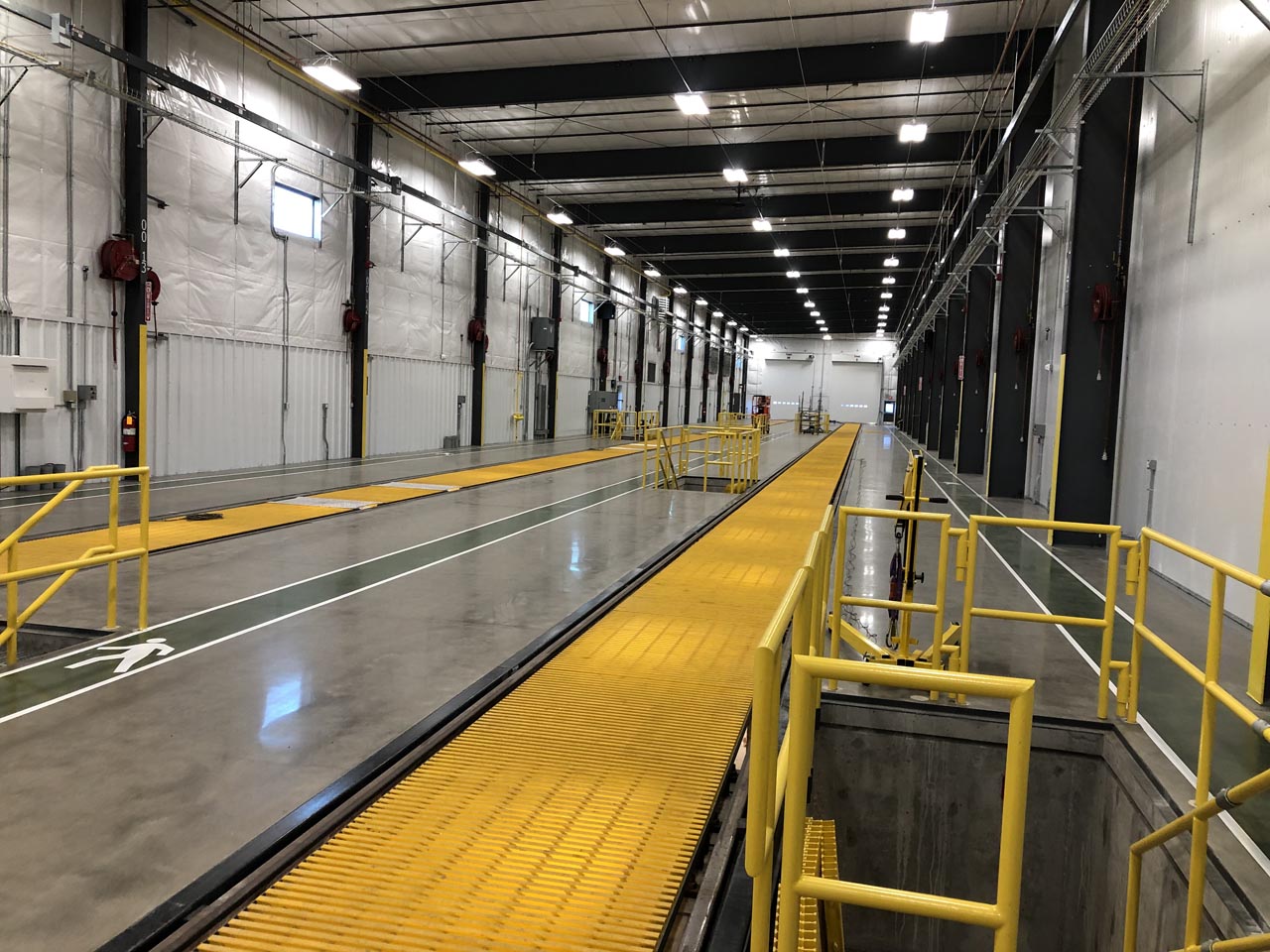 Alstom built a new static testing facility at Hornell that can accommodate an entire trainset. 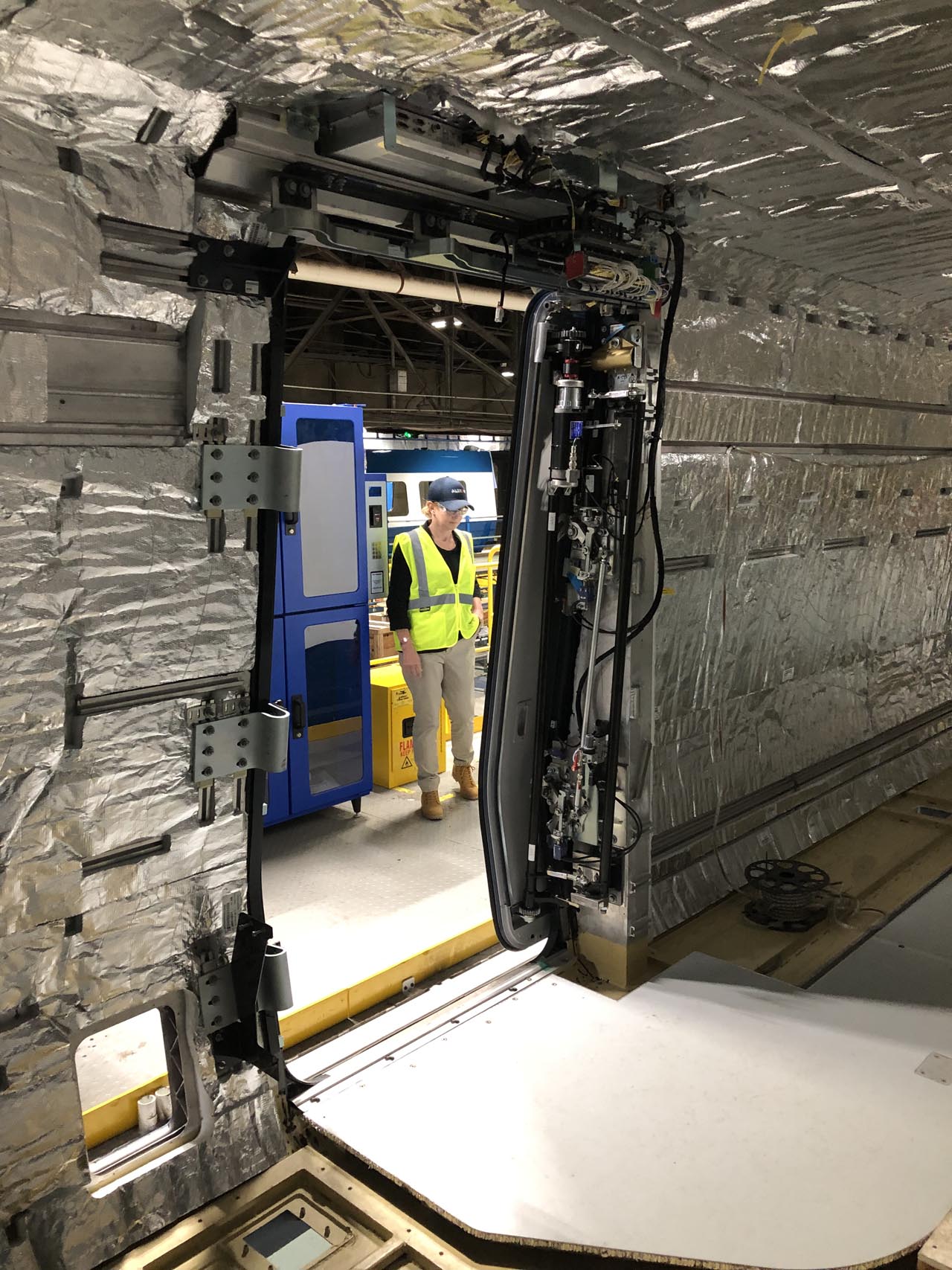 The café cars feature a wide loading door on either side. They will be equipped with a staffed counter, a self-service/self-pay area, a few small tables, but no barstool-style seating, like the current Acela Express has. Amtrak is also considering food cart-style service, as is available on Canada’s VIA Rail and in Europe. 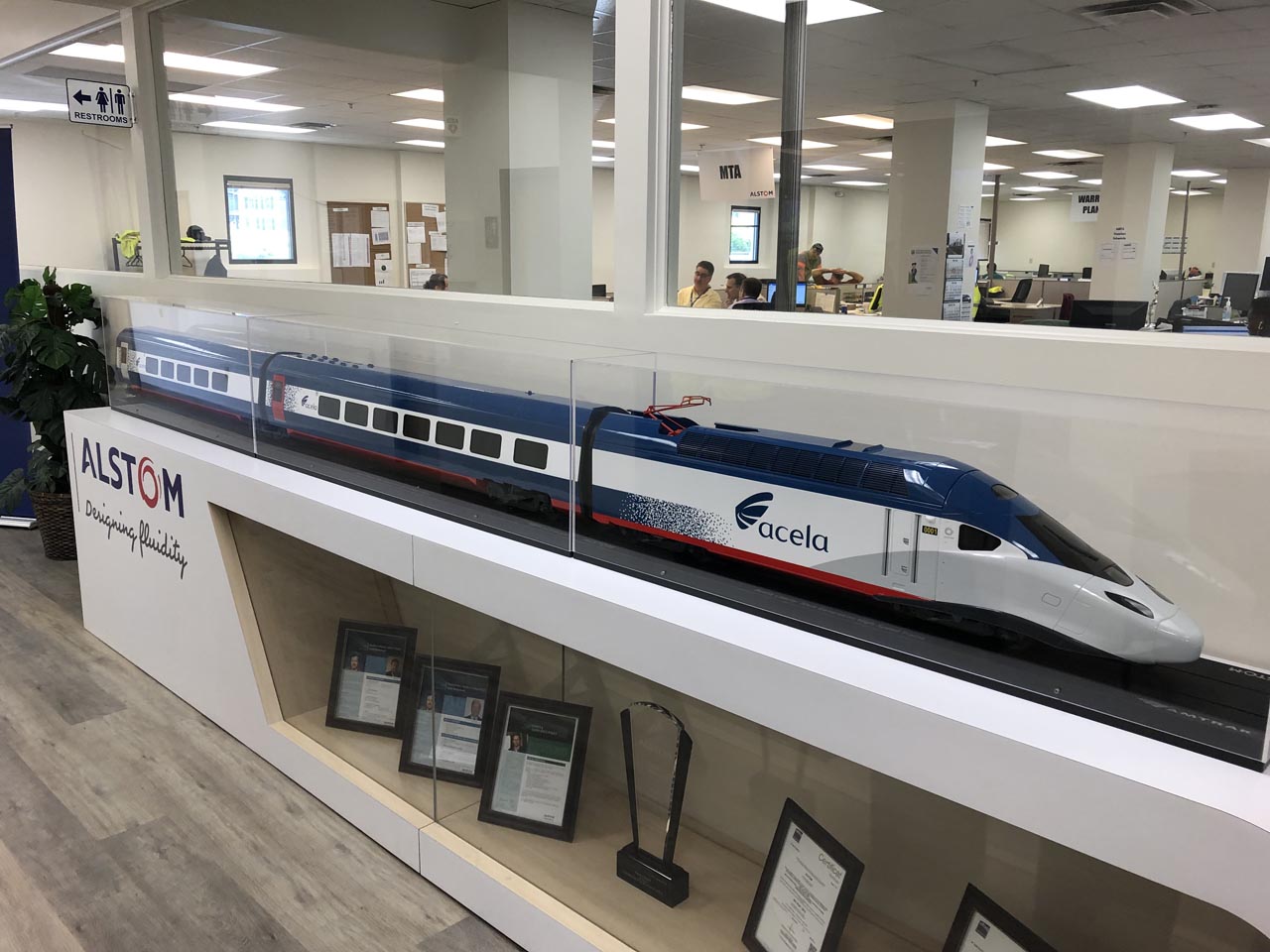 This model, on display in the Alstom office, shows the final livery.