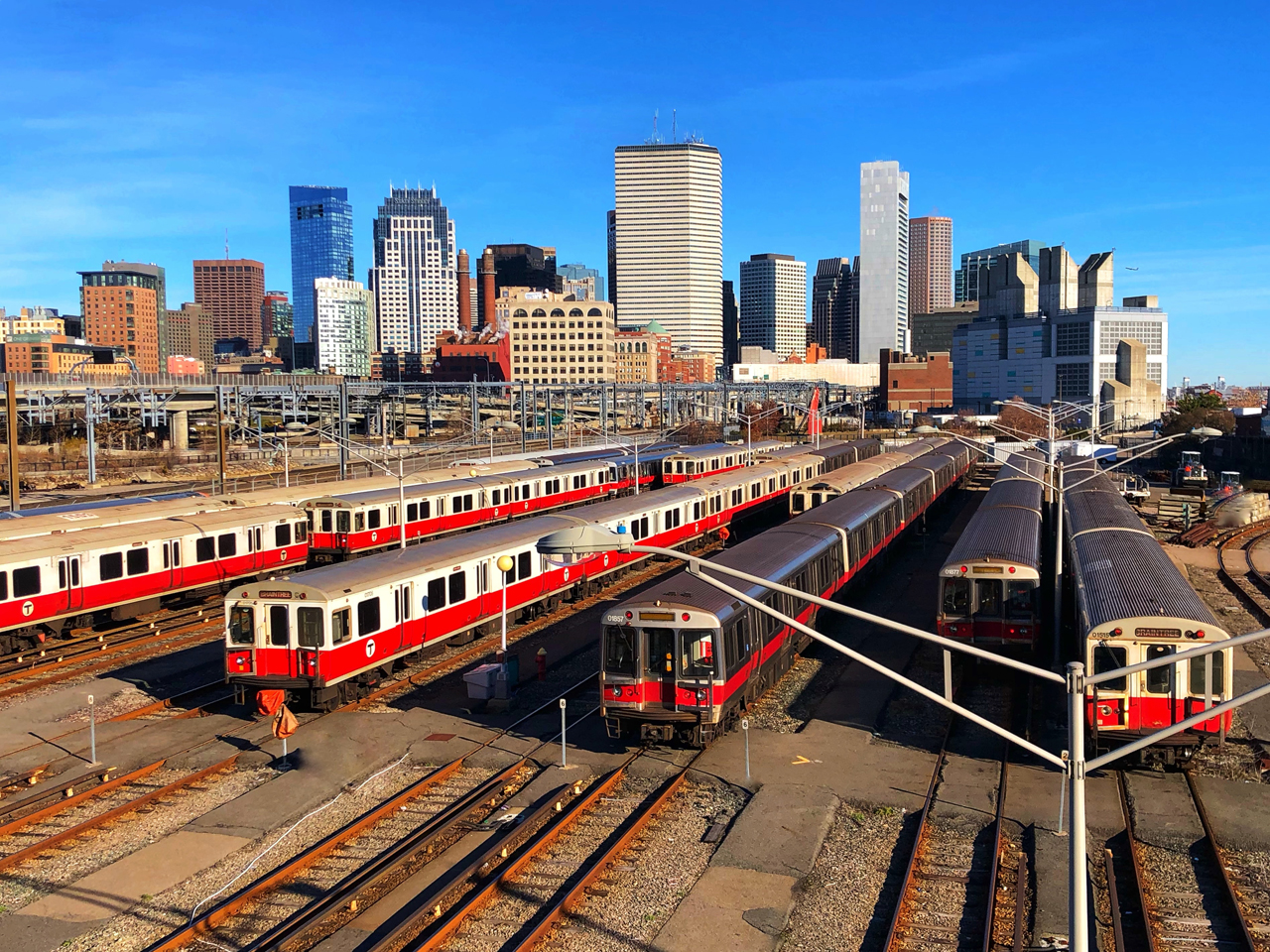 MBTA calls its service-reduction plan “Forging Ahead,” which “Reduces service frequency, Preserves more access and hours of operation, and Avoids some service changes that would have required customers switch modes.”

Transit riders throughout the country are facing severe service cuts, as ridership and revenue remain low, and state and local governments face severe financial woes. Earlier this month, Railway Age reported that Massachusetts Bay Transportation Authority (MBTA, known locally as the “T”) announced a lengthy litany of services to be slashed. The Fiscal & Management Control Board (FMCB), which is acting as the Board for the Boston agency these days, has now finalized and approved the cuts by a 3-2 vote.

Some of the reductions will not be as severe as previously anticipated, but commuter rail riders will still be hit the hardest.

MBTA calls its service-reduction plan “Forging Ahead” (download below), and notes that it “Reduces service frequency, Preserves more access and hours of operation, and Avoids some service changes that would have required customers switch modes.” According to the agency, service will be reduced by 20% on the Red, Orange and Green lines and by 5% on the Blue Line. The “Green Line” is a set of four light rail lines, while the other three are “metropolitan-style” subway lines. The changes will take effect in the spring.

It could have been worse. There was a proposal to cut the “E” branch of the Green Line, which runs along Huntington Avenue at surface level, back by five stops on a stretch eight-tenths of a mile long. Also proposed: To end the service day one hour earlier, which would have concluded all service by midnight. The current hours, which call for the last runs of each line to leave the downtown area about 12:30 a.m. and arrive at their final destinations shortly before 1 a.m., will stay in effect. Reductions on the bus side will not differ significantly from the prior proposal. A few ferries will still run, with reduced weekday service to Hull via Hingham. The boat to Charlestown and direct service to Hingham will be gone, but the original plan called for all ferries to be eliminated.

The original proposal also called for severe reductions on the commuter rail side, with no more trains after 9 p.m. on weeknights, and no trains at all on weekends. The revised plan, which will take effect in January, still ends weeknight service at 9 p.m., but weekend service would continue only on five lines: Providence, Worcester, Middleborough, Fairmount (Dorchester Branch) and Newburyport/Rockport. The latter is the only North Side line (historic Boston & Maine lines, running from North Station) that will have any weekend trains. According to MBTA: “This plan maintains up to 70% of pre-pandemic service levels. Weekday service levels will be further optimized and shared with the board in January 2021.”

The upcoming mobility curtailment for residents outside the local service region who depend on the T’s commuter trains will be severe. For those who live on the few lines that will still have some weekend trains, service will be limited. For those who live elsewhere, there will be no service. Nobody will be able to catch a train home after 9 p.m. on weekdays, either.  Some riders will be able to use local buses to take a time-consuming journey with a number of transfers. For others, no more trains means no more mobility. Other local transit authorities operate buses outside the core service area; this service is often limited in scope and span of the service day. In addition, the current low levels of ridership and revenue may force those providers to slash service, too.

According to MBTA, the cuts will be “short term” due to “low ridership.” It explained the rationale for the service reductions this way: “As a result of the decline in ridership that is similarly impacting transit agencies across the country, the MBTA continues to only transport 330,000 trips on an average weekday, but operates the same high levels of service as it ran to serve 1.26 million daily trips prior to the pandemic—an unsustainable level of service delivery. Since Nov. 9, when the MBTA first announced the Forging Ahead service changes proposals, there has been no significant increase in ridership, and on many modes, ridership has decreased.”

Against this backdrop, there were different service reductions on the commuter rail side that started last week. They will last for two weeks, and will cut the weekday schedule from 541 trains to 246 system-wide, a reduction of more than 44%. MBTA calls the reduced service levels “storm schedules,” which provide for evening and weekend service, even though peak-hour service is sharply reduced, and there is less service at other times on weekdays.

Rather than eliminate most of the weekend service and all service after 9 p.m. on weeknights, could the agency save enough money by running the “storm schedules” instead? That alternative would have been easier on transit-dependent riders in the communities along the rail lines.

The agency also said: “Commuter Rail has operated consistently throughout the COVID-19 pandemic, helping to provide critical transit for essential workers, including nurses and medical professionals, and for transit-dependent communities. Ridership on Commuter Rail has been approximately 13 percent of its pre-COVID levels, and during the holiday weeks in December ridership is historically low.” That appears to justify the “storm schedules,” but not necessarily the severity of the cuts that will be coming next month.

Local advocate Dennis Kirkpatrick, a member of the Board of the Rail Users’ Network (RUN, of which this writer is also a member) told Railway Age that riders are keeping an appropriate distance on the trains. He added that the virus has caused crew shortages, as the agency claimed: “Now, COVID absences of engineers and conductors are an issue, either due to positive tests or exposure requiring quarantine. One of the Commuter Rail (CR) lines was bus-shuttled the other day due to the staffing shortage.”

Kirkpatrick also said: “And another issue is politics. An example of that is the Fairmount line. It has alternate buses and could be ‘bus-tituted,’ but they have added service and that will not be impacted by the COVID cutbacks other lines will be facing. That line has become a political hot potato. When the MBTA was pulling staff from the CR on that line to operate other longer runs, there was quite the outcry. The same thing happened when the Green Line ‘E’ line was bussed for transit operator shortage and also rolling stock shortages.” He concluded with a prediction: “So as noted, the big issue is headways pushed out to 90 minutes for many trains and out to 120 minutes for others. The 120 (two-hour) headways equates with weekend service on pretty much all of the lines. I expect that there will be no way to maintain social distancing. And of course people will return to cars.”

Kirkpatrick’s expectation is part of the cycle of decline for rail lines, with service cuts pushing motorists who would otherwise choose to ride onto the roads, thereby reducing ridership further, which reduces revenue and leads to more service cuts. Non-motorists have no choice, and end up losing some of their mobility every time service is reduced.

RUN Chair Richard Rudolph, who lived in Boston for several years, said that it is time for the agency’s Citizens’ Advisory Committee (CAC) and senior management to fight back. He told Railway Age: “The Citizens’ Advisory Committee needs to first speak up and to send a letter to the Executive Director or Manager of the Transit Agency they represent. The CAC committee should also contact reporters who write about transit issues for their local newspapers and to write an op-ed piece regarding the dilemma that their transit agency is facing and that drastic cutbacks are not the answer! Senior management should be speaking out forcibly to their congressional representatives to make sure additional funding is provided in the latest bill that is being proposed by the House and Senate. CAC’s can also get the word out about how transit or commuter rail agencies have stepped up to provide greater protection to riders and that it is indeed safe to utilize their services.”

The CAC objected to the cuts and called for other ways to fill the financial gap. For instance, Steve Lipinski of WGBH’s State House News Service reported Dec. 5: “After doing its own analysis, the advisory board estimated the MBTA’s fiscal year 2022 deficit plus additional risks totals $528 million, roughly 20% smaller than the total worst-case scenario gap of $652 million that MBTA budget writers estimate.” He also reported: “Brian Kane, executive director of the advisory board, said in an interview that the difference in estimates could effectively cover all of the money the agency hoped to save next fiscal year by slashing weekend commuter rail service, eliminating 25 bus routes and some ferries, reducing subway service and more.”

Lipinski’s Dec. 14 report quoted State Transportation Secretary Stephanie Pollack as saying: “I do not see what the T is proposing as anywhere close to a doomsday scenario. This is a service adjustment, which is providing more than adequate service for the number of riders we have and expect to have for the remainder of the current fiscal year.”

This may be true for most riders within the T’s local transit zone, especially since the length of the service day has not been reduced, and all of the Green Line will remain in service. For riders on the commuter rail side, especially those without access to an automobile, Pollack’s statement is questionable, at best. They would be out of luck if they work late or wish to stay in the city later on weekdays, and they would certainly be out of luck on weekends on a majority of the rail lines.

So might millions of other transit-dependent people elsewhere in the nation if similarly threatened service cuts are implemented. Can our transit keep going until enough people are vaccinated against the deadly virus to bring improved ridership to our transit systems? How many riders will actually come back, and when will they ride? Will federal, state and local governments have the money, and the volition, to keep the nation’s transit going over the long haul? Cuts are coming, but how deep will they be, and how long will they last? Perhaps the most important question: Will the transit that we lose ever come back? These remain the big questions, and Railway Age will continue to follow the efforts to answer them, in Boston and elsewhere.