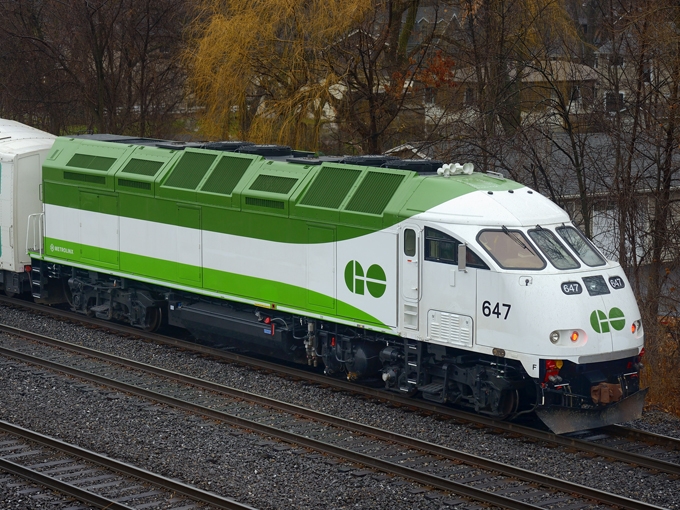 GO Transit’s first MP54AC Tier 4-compliant diesel-electric locomotive from the MotivePower Inc. (MPI) Division of Wabtec has been delivered and underwent testing on the weekend of Dec. 12-13, 2015. No. 47 is part of a $4 million order for 11 MP54ACs announced in 2012.

In 2013, GO Transit sent one locomotive from its existing MPI-built MP40PH-3C fleet of 67 units to Boise, Idaho to be repowered, replacing the existing 16-cylinder EMD 710GB engine with a pair of Cummins 16-cylinder QSK60 engines rated at 2,700 hp each (5,400 hp total). As a result of the dual engine design, heavy modifications to the body have been made to accommodate extra air intake and exhaust stacks.

According to MPI, the dual engine setup affords operators the ability to improve reliability and save fuel, as one engine can be deactivated as needed, or used as a backup should one fail during single-engine opeartion. The MP54AC features an IGBT-based AC traction system with individual axle control, brushless AC motors and a synchronous alternator. Over the Dec. 12-13 weekend, GO Transit tested its new delivery for station timing, acceleration and braking distance at speeds of up to 93 mph. Test trains were 14 cars in length, to simulate a fully loaded train.

Metrolinx and MPI subsequently announced a $63 million contract for an additional 10 MP54AC locomotives, bringing the total to be delivered to 21.