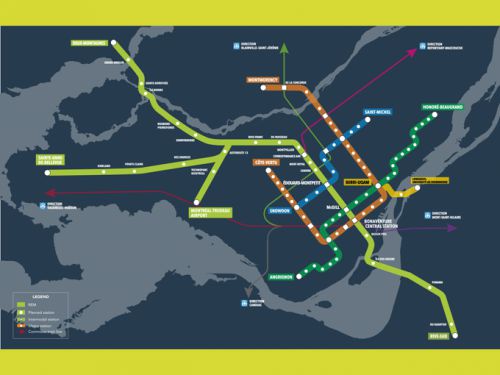 A 100-year-old tunnel through Mont-Royal has become a choke point for parallel projects to build new intercity and regional commuter railways radiating from Montreal’s Central Station.

With political momentum building for both VIA Rail’s High-Frequency Rail (HFR) project and the Quebec public pension fund’s regional light rail scheme, construction timelines may depend on whether the two railway designs can be adapted to share the three-mile-long, double-track tunnel.

Should engineers fail to find a way to share it, the 42-mile Réseau électrique métropolitain (REM) will have exclusive use of the tunnel, VIA Rail conceded in an email exchange with Railway Age Feb. 6. The tunnel is currently used by Montreal’s existing commuter network and, with Montreal a key partner it will default to the new REM system.

“In order to maximize the usage of public infrastructure and reduce the cost to taxpayers, our objective is to achieve the interoperability of VIA Rail’s HFR project and the REM project,” wrote VIA Rail spokesperson Mariam Diaby.

The tunnel is important to VIA Rail because it would be the shortest link between downtown Central Station and the former Canadian Pacific line running along the north shore of the St. Lawrence River to Quebec City. (That line is currently lightly operated by Quebec-Gatineau Railway. VIA Rail would have to negotiate its purchase, perhaps leaving Quebec-Gatineau with overnight operating rights to serve its existing industrial customers. VIA Rail has a similar deal with Canadian Pacific for CP’s former Brockville-Smith Falls subdivision.)

“Track sharing is the current approach in Europe and Asia, where existing technology allows municipal light rail and intercity trains to share the same infrastructure in metropolitan areas,” wrote Diaby. “The current infrastructure in the Mont-Royal tunnel and beyond can already accommodate both light rail and heavy rail. If the tunnel becomes unavailable, we will adapt to the options available.”

Currently, VIA Rail trains between Montreal and Quebec City run over CN’s south shore subdivisions where they compete with difficulty for track time with CN’s long transcontinental freight trains.

VIA Rail has no choice but to play nice with the REM’s promoter and operator: the huge Quebec public pension funds, the Caisse de dépôt et placement du Québec. Financing of VIA Rail’s C$4 billion HFR project would be difficult without Caisse participation. It would be mere pocket change to the pension fund, which is paying C$3.5 billion of the C$6 billion REM cost, with the provincial and federal governments investing the balance. The commuter system is intended to return substantial profits to the investors, since the pension fund has an obligation to make money for its beneficiaries.

VIA Rail’s HFR Corridor spreadsheets also compute profits for non-governmental investors, while the federal government would pay for right-of-way acquisition and electrification and retain the infrastructure as an asset on the public balance sheet. The dedicated HFR route would be an assemblage of existing low-volume freight lines and abandoned rights-of-way.

While VIA Rail has offered a cheaper diesel-powered alternative, the greenish federal government is unlikely to chose anything but a fully electrified system powered by Quebec’s northern rivers.

A separate C$1.5 billion request for conventional rolling stock has also been submitted by VIA Rail for federal approval. Those funds would be used to replace the existing collection of museum-worthy coaches operated by VIA Rail between Quebec City and Windsor, Ont. The renewed fleet will be required even with the new HFR because VIA Rail would continue to serve its current stations on the CN main line with local trains, making Kingston, Ont. an intermediate terminal between Montreal and Toronto.

The Canadian federal government is expected to decide on both VIA Rail requests sometime this year—and surely before the next federal election in October 2019.