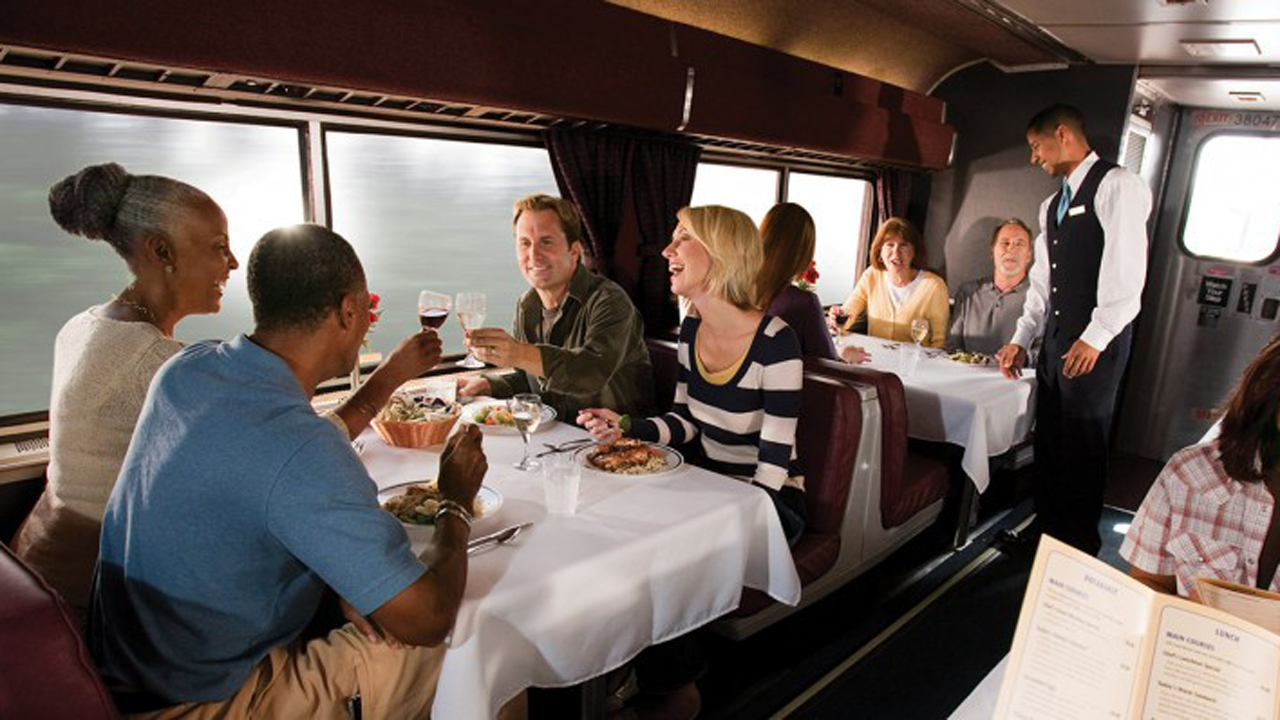 Amtrak is no longer offering traditional dining car service on its trains east of Chicago and New Orleans. This is a sad development in the downward slide of Amtrak’s long-distance trains, especially under CEO Richard Anderson’s leadership. There have been a number of “obituaries” for Amtrak dining service, but they are misplaced in time. They have either come too soon, or they should have been written about 15 years ago.

There are dining cars on Amtrak, but traditional service (except for the Auto Train) can only be found west of Chicago or New Orleans. The termination of traditional dining service that went into effect on Sept. 30 did not reach that far west. Given the recent past, this might be a temporary situation. The is a definite trend toward reducing services on Amtrak, including reducing labor costs by eliminating crew members who serve meals to passengers. So a blanket obituary about dining cars is premature, but maybe not by much.

At one time, the dining car was a popular feature of rail travel. This writer remembers delicious regional food specialties prepared and served on the train, when railroads were proud of their dining service and dining car crews. The dining car was always a cost center and the railroads knew that, but it brought passengers to the trains, and it provided good publicity for the railroads. As late as 1966, the Pennsylvania Railroad touted its dining cars, particularly on its feature train between New York and Chicago, the Broadway Limited. The railroad’s ads described the dinners available to passengers and contrasted those offerings to airline food. Today, under the leadership of a manager who spent most of his career managing airlines, Amtrak serves airline-style food, provided by an institutional-food provider.

Many of this writer’s dining car memories recount great meals almost a half-century ago: Southern specialties on the Florida trains and the Southern Railway to New Orleans, New England food on the New Haven Railroad’s Merchants Limited between New York and Boston, Rocky Mountain Trout on the Denver & Rio Grande Western, Fred Harvey Service on the Santa Fe, and the “King’s Dinner” on the Panama Limited between Chicago and New Orleans in 1970. That particular feast cost $10 and included a steak, trout almondine, everything else from soup to dessert and $4.50 worth of alcohol.

Amtrak nationalized dining service in 1973, but still had chefs prepare the food and wait staff serve it. Through the years, it had its ups and downs. Amtrak served tray meals on several trains in the 1980s, but restored freshly prepared food later. Dining service improved about 20 years ago under the leadership of Brian Rosenwald, and some regional specialties returned, especially on the Western trains. The Crescent between New York and New Orleans had the most regional specialties, thanks in part to the efforts of John Robert Smith, who was Chair of the Amtrak Board and also mayor of Meridian, Miss., (a stop on that train) at the time. The City of New Orleans between that city and Chicago had Crescent City specialties like gumbo, and red beans and rice with sausage, prepared by genuine New Orleans chefs.

On April 25, 2005, writer was on Train 6, the California Zephyr that day, and had one of the last dinners of Rocky Mountain Trout that Amtrak ever served. Two members of the dining car crew were making their last trip before retiring, and another decided to stick it out for six more months, in order to get a significant increase in his pension.

Exit china. Enter disposable plates and cups. Enter Dobbs, later replaced by Gate Gourmet, and still later replaced by Aramark, a huge purveyor of institutional food. Steaks were still grilled and some breakfast items were freshly prepared. The era of dining car meals, as it was known traditionally, was ending. The food service continued for several more years.

The beginning of the end came July 1, 2015, when the dining car was removed from the Silver Star, the train between New York and Miami that runs on the part of the historic Seaboard Line that serves Raleigh, North Carolina and Columbia, S.C. Sleeping car fares were reduced, but the only food service car was the lounge car. The entire run is scheduled to take 31 hours from end to end, and some people referred to the train as the “Silver Starve” or the “Silver Starvation.” Amtrak originally said that the removal of the dining car was “experimental,” but this writer and many advocates were skeptical.

Could a sufficiently strong advocacy effort in 2015 have saved the traditional dining cars service, including on the Silver Star? There is no way to answer that question. Even if that objective could have been achieved, the food would still have remained the same: airline-style food, rather than food freshly prepared on the train.

Amtrak has said for a long time that it costs too much to make and serve freshly prepared food. Amtrak foe and former Florida Republican Congressman John Mica gave Amtrak an excuse to allege that in 2015, when he sponsored and Congress passed a provision requiring Amtrak to eliminate all financial losses on dining car service by the end of 2020; 49 USC §24321. (Remember his idiotic “Amtrak’s $5.00 hamburgers cost taxpayers money” political stunt? – Editor)

Mica was finally voted out of office, but his political ghost still haunts, wielding the hatchet that is cutting the dining cars off Amtrak’s trains. If Amtrak is required to eliminate all losses directly attributable to dining service by the end of next year, it is reasonable to expect that dining cars as we know them will be gone by that date.

Some advocates are pushing back, calling on Congress to repeal §24321. That may constitute a move to close the barn door after the horse has already escaped, especially if Amtrak leadership does not change significantly in the foreseeable future. What such a move would do is remove Amtrak’s excuse (or one of them, anyway) for taking the dining cars off the trains. Specifically, §24321(d) states: “No Federal funds may be used to cover any operating loss associated with providing food and beverage service on a route operated by Amtrak”; a clause that leaves some wiggle room for Amtrak to continue providing full dining service while using its accounting (which many advocates claim is questionable, anyway) to keep Federal funds away from dining car costs. Still, the same clause can also be used as an excuse for restricting riders to tray meals or lounge car snacks.

Amtrak refers to the meals east of Chicago and New Orleans as “contemporary” dining, and has credited young riders with complaining about the “community seating” in dining cars; preferring to eat pre-packaged food alone. That may be true of some “Millennials,” but certainly not all of them. Many disputed the characterization in comments to the Washington Post. One member of that age cohort, New Jersey advocate Jesse S. Gribin, took a “bucket list” trip to Miami in September, so he and his wife could have meals served to them on the Silver Meteor. He would have preferred to stay at the 1950s-vintage Fontainebleau Hotel in Miami Beach during the winter, but he wanted to have dining car meals served to him one last time.

Even if young riders are divided on the merits of community seating for a meal, other riders, including many seniors, like it. This writer has always been one of them. Seniors tend to be among the most loyal Amtrak riders, and time will tell whether or not they are willing to keep riding on Amtrak, even without having meals served to them.

This writer had an unexpected dining car experience on Amtrak recently. Train 22, the Texas Eagle, was running more than four hours behind schedule on Wednesday, Oct. 9. After the regular lunch period, and after the train stopped at Springfield, Ill., steward Tony Clemente invited passengers into the dining car for a surprise. He and his crew broke out the can of beef stew that is kept for such purposes, cooked some rice, and gave everybody a small bowl of stew over rice, to tide us over until we got to Chicago (we actually arrived at 6:30; slightly more than 4½ hours behind schedule). To this writer, it tasted much better than other Amtrak offerings. More important, it provided one more chance for this writer to eat at a dining car table with three other riders, and enjoy a brief conversation in the “community seating” style. The pace was fast, with an “eat it and beat it” deadline, but it was an unexpected dining car experience that added a final ten-minute memory to this writer’s collection of dining car memories.

Freshly prepared food is not entirely gone from North American rails, even on Amtrak. Not counting the “dinner trains” that still run on some tourist railroads, VIA Rail offers historic-style dining car food on its Canadian, Trains 1 and 2 between Vancouver and Toronto, twice a week, at least for sleeping car passengers. That train provides a wonderful rail travel experience, but it is essentially a “cruise train” and not used for point-to-point transportation for many riders.

So, my fellow Amtrak riders, come prepared. Bring your own food if you can. There will still be lounge car snacks, if you can’t. If you can grab a quick bite during the standing time at Albany-Rennselear, Albuquerque, Denver or a few other places, take advantage of the opportunity. Traditional dining car service is not yet completely gone, but it could be soon.

It will not be forgotten; at least not by “seniors” like this writer.

Editor’s Note: This article is an amended version of one previously published, with a few factual inaccuracies corrected.