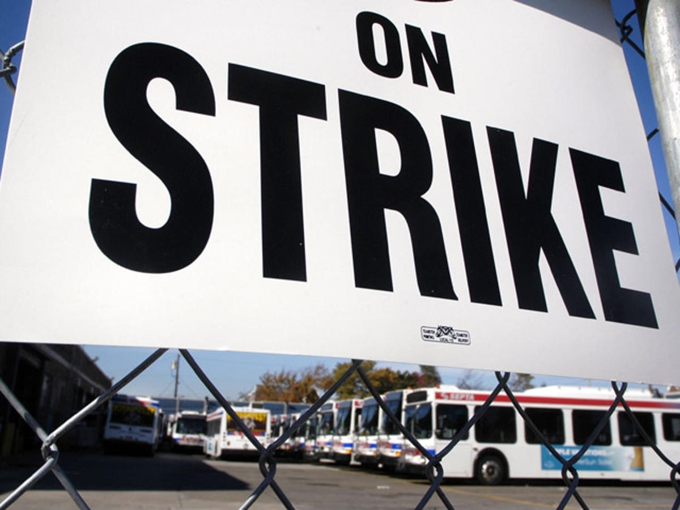 As of 12:01 a.m. Nov. 1, one week before Election Day, when thousands of Philadelphia inner-city residents would be using the city’s transit system to get to the polls, 4,738 TWU (Transport Workers Union) Local 234 members walked off the job following expiration of the union’s contract with SEPTA (Southeastern Pennsylvania Transportation Authority).

SEPTA’s transit system carries roughly 900,000 people a day. That the TWU strike, which affects SEPTA’s light rail, subway and bus systems and not its Regional Rail network, comes only a week before Election Day on Nov. 8 is puzzling to some industry observers. Comments Railway Age Contributing Editor Frank N. Wilner, a former United Transportation Union official and author of a book on railroad labor relations:

“It’s sheer stupidity on the part of labor. It’s just one week prior to the presidential election. The Clinton-supporting labor union representing Philadelphia transit workers who provide core transportation—buses, trolleys, subways—that so many inner-city Clinton supporters depend upon to cast a ballot, goes on strike? The Philadelphia vote is as essential to a Clinton victory as the Pennsylvania vote. SEPTA says it will seek an injunction for only Election Day. But even if it comes to fruition, the inability of getting that word out in so short a time period, and convincing potential voters that their transit system will, indeed, operate that day, similarly constrains votes that otherwise would go to Clinton. It’s as if David Duke, et al., found another way to suppress the African-American vote. Here we go again with ‘brilliant‘ labor’s imitation of Cleavon Little holding the gun to his own head in Blazing Saddles and threatening to shoot himself if those wanting to lynch him don’t back away.”

Wrote political commentator John Featherman on Oct. 31 on Philly.com, the online version of the Philadelphia Enquirer:

“Unpatriotic. That’s what SEPTA workers would be if they decided to strike and it carries through to Election Day. It wouldn’t be the first time. SEPTA workers struck during the general election in 2009—a day the Philadelphia Inquirer reported went from “bad to worse.”

“Just a reminder to SEPTA workers: You’re Americans first. You simply don’t do this to voters on Election Day, especially one where every vote counts. You don’t treat yourself at the expense of everyone else. You be a good citizen first.

“Or have we forgotten the Golden Rule?

“A SEPTA strike will affect working people the most by making it difficult to get to the polls. Since we don’t have early voting in Pennsylvania, Philadelphians have one day to vote. And the fact is that working class people already have a harder time getting to the polls. Many either are en route before polls open or work until 5 p.m. or 6 p.m. If they don’t have public transportation, some might find it hard, or impossible, to get to their polling places before the 8 p.m. deadline.

“These are folks that can’t afford Uber, Lyft and taxis. They will be hard-pressed to find a carpool, as well. People have to get to polls on time. If SEPTA workers strike knowing this they are intentionally sabotaging this most important election of our lifetime.

“Pennsylvania could be key in determining who becomes our next President. Making it more difficult for Philadelphians to vote is just plain mean. Not only that, but it’s reckless, irresponsible and un-American. SEPTA workers are part of a quasi-governmental agency. If they must strike, then do it—but right after the election. Otherwise, you inconvenience the entire voting public.”

The TWU strike follows an Oct. 29 union-issued statement saying that SEPTA officials had refused to address “important non-economic issues” and that the agency was not offering a “reasonable economic package.” In its statement, the TWU took a swipe at SEPTA board chairman Pat Deon, a Republican: “The chances of a strike at 12:01 a.m., Nov. 1 increased significantly today. Last night, a well-attended meeting of ‘Solid 234’ union activists stepped up the local’s strike preparations. Today, the leadership met with politicians at every level of government in the hope that progressive-minded political leaders will press the Republicans in control of the SEPTA board to come to their senses, particularly Pat Deon, the strike-happy chairman of the SEPTA board.”

SEPTA said negotiators had worked for months to reach a fair contract with TWU Local 234 and avoid disrupting service. “The decision by TWU President Willie Brown leaves thousands of SEPTA customers without the transit services they rely on for travel to and from work, school and medical appointments,” the agency said in a statement. “In doing so, Mr. Brown walked away from a contract offer that would have provided his members pay raises, enhanced pension benefits, maintained health care coverage levels and continued job security, while also remaining fair and affordable for the taxpayers and riders who fund SEPTA. We are hopeful that a tentative agreement will be reached before Election Day. If we foresee an agreement will not come to pass, SEPTA intends to seek to enjoin the strike for Nov. 8 to ensure that the strike does not prevent any voters from getting to the polls and exercising their right to vote.”