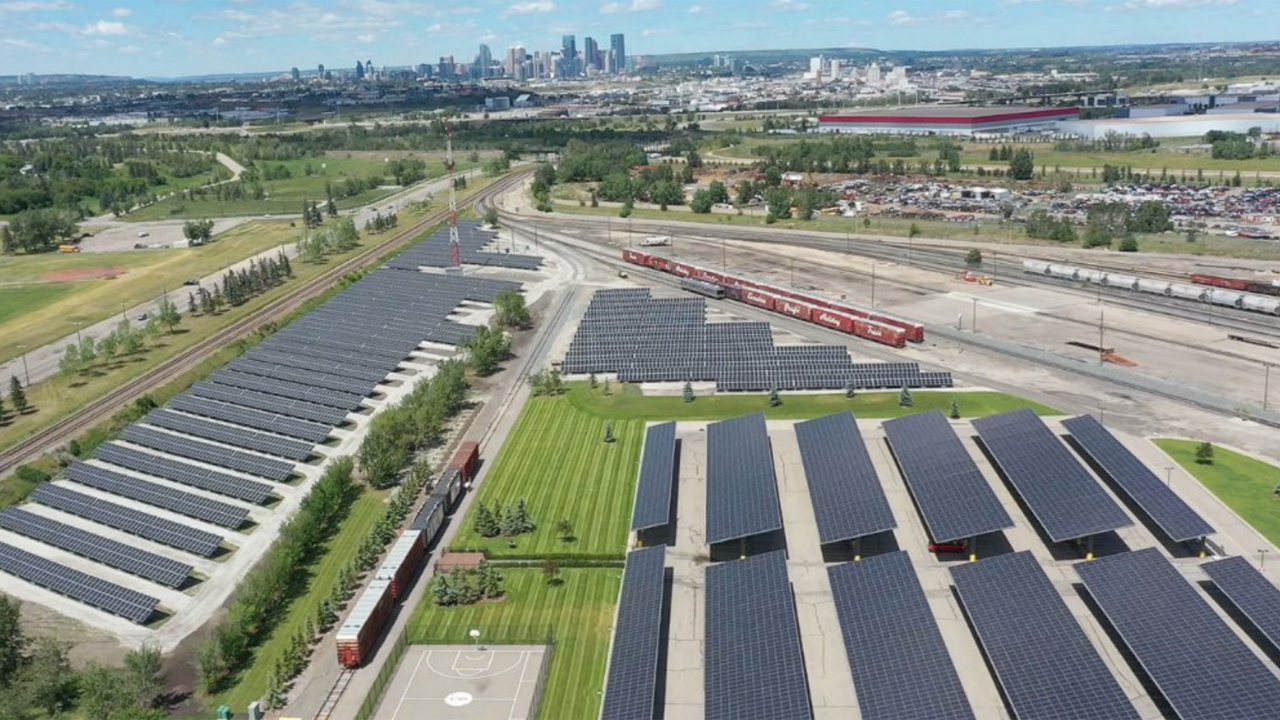 Canadian Pacific was honored with RAC’s Environment Award in the North American Class I Freight Category for its Solar Energy Farm at corporate headquarters in Calgary.

The RAC awards recognize freight and passenger railroads “for their outstanding contributions to rail safety and environmental impact,” the association reported on Dec. 2.

RAC’s Safety Awards are awarded annually; the Environment Awards are presented every two years. Honorees are chosen from member submissions and ratified by the Safety and Operations Management Committee (SOMC). In addition, nominations are limited to one initiative per RAC member per category (or subcategory).

• Safety Award, North American Class I Freight – Employee Incidents and Third-Party Incidents Category: CN, for its Autonomous Track Inspection Program (ATIP). “The program consists of eight boxcars, each equipped with its own solar and generator power, along with electronic communication systems and servers capable of housing various inspections technologies in revenue train service,” according to RAC, which noted that CN first introduced an Autonomous Track Geometry Measurement System (ATGMS).

“What distinguishes CN’s ATIP is its use of state-of-the-art sensing technologies and advanced analytics to inspect tracks with special railcars traveling at service track speed,” CN Assistant Vice President, Safety Tom Brown said. “This allows CN to realize inspection frequencies far above traditional means and provides unparalleled visibility into the safety and structural integrity of its track with more than 38 billion measurement records a month.”

• Safety Award, Passenger (Intercity, Tourist, Commuter) Category: VIA Rail Canada, for its new coupler tool, “which is a safer, more efficient and ergonomic method to remove and install the coupler assembly on the various types of coaches and locomotives,” RAC reported. The tool “eliminates the need for counterbalance weights and provides a stable mobile platform that can be transported to the track where the coach or locomotive is located. The simple design with both vertical and lateral adjustments for precise placements during removal/installation benefit is the elimination of pinch points, crushing injuries and strain to employees.”

The mechanical services department identified a risk and formed a cross-functional team with employees from various departments to develop the tool, according to VIA Rail Canada Chief Operating Officer Dominique Lemay.

• Environment Award, North American Class I Freight Category: Canadian Pacific (CP), for the Solar Energy Farm at its corporate headquarters in Calgary. “The project is one of Alberta’s largest private solar farms and is expected to generate more power than consumed annually by CP’s main headquarters building,” RAC said. “It consists of four extensive solar gardens covering approximately 10 hectares of underutilized campus grounds and creating covered parking for up to 500 employee vehicles. The project includes more than 9,700 solar panels with the capacity to generate up to 5 megawatts of renewable electricity, substantially reducing CP’s demand for electricity from local utility providers.”

“This project serves as a daily reminder to all our employees of CP’s commitment to reduce the greenhouse gas emissions from our business operations,” CP Senior Vice President Strategic Planning & Technology James Clements said.

“Obtaining the LEED Gold v4.1 certification [in 2020] was a milestone for VIA Rail and is a great source of pride for our teams,” Dominique Lemay said. “It brought us one step closer to our green building goal and formalized our commitment to creating more sustainable and accessible stations and maintenance centers. It is by modernizing our infrastructure and services, and by making them greener, that we will lead Canadians to a more sustainable future.”

“As the years go by, our members continue to work hard to reduce their environmental footprint and enhance rail safety measures,” RAC President and CEO Marc Brazeau said. “These awards reflect the ongoing commitment of our members as well as the four pillars of our RightTrack initiative.”