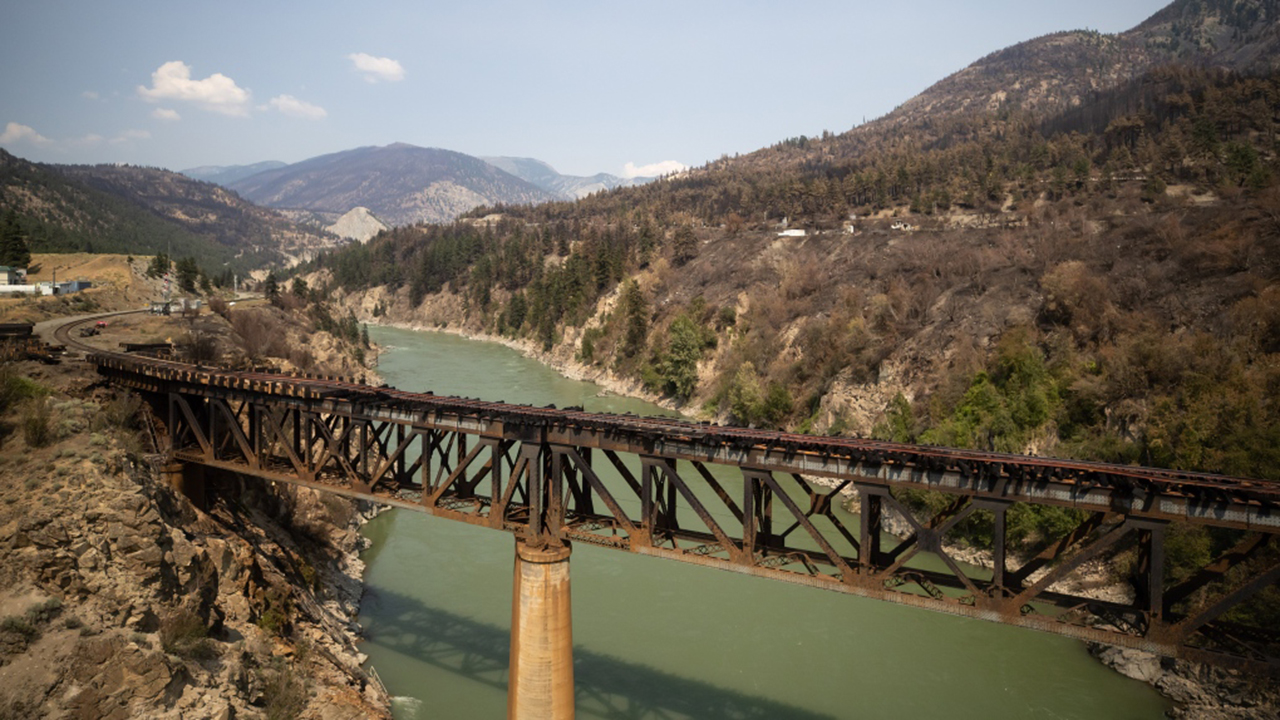 CN’s Ashcroft Subdivision bridge in Lytton, B.C., was damaged by the wildfire ion June 30 that destroyed most of the town. Photo by Darryl Dyck/The Canadian Press

Canadian Pacific has responded to the Transportation Safety Board of Canada (TSB) investigation update concerning the June 30, 2021 fire in Lytton, B.C., which occurred in the vicinity of Mile 98.3 on CN’s Ashcroft Subdivision by stating that “railways are not a significant cause of wildfires in B.C., contrary to media and government speculation” and that “it is irresponsible and misleading to imply that railways are to blame for the fire.”

“At approximately 16:50 Pacific Daylight Time (PDT) [on June 30], smoke was spotted on the nearby hills around the pedestrian bridge that parallels the CN bridge [over the Fraser River] at Lytton, B.C.,” TSB’s update said. TSB noted that it deployed investigators on July 9 to gather information and assess the situation.

TSB Chair Kathy Fox said in a statement that “a full TSB report on any train-related cause or contributing factors in connection to the Lytton fire could take up to two years, and that any conclusions or speculation regarding any cause of the Lytton fire or contributing factor is premature.” However, Fox was quoted as saying the fire “is certainly a wake-up call to really look at what precautions need to be taken by railway companies …”

“In light of the early stage of this TSB investigation, we believe it is irresponsible and misleading to imply that railways are to blame for the fire,” CP said. “To the best of CP’s knowledge, the last train that passed through Lytton on CN’s Ashcroft Subdivision before the fire started was a CN train known to CP as CN 731L. To clarify, while this train is CP equipment, with CP locomotives and railcars, it was transferred to the care, custody and control of CN at Kamloops on the morning of June 30, 2021, and was being operated by CN, using CP’s locomotives, on CN’s Ashcroft Subdivision. Transport Canada inspected that train on July 6 and confirmed in a letter dated July 7 that there were ‘no non-compliance or concerns’ in relation to that train.

“CP confirms that it has also inspected that train, as well as all other CP trains that went through the town of Lytton during the relevant time period on June 30 when we understand the fire started. Based on train records, including contemporaneous video footage, CP has found nothing to indicate that any of CP’s trains or equipment that passed through Lytton caused or contributed to the fire.

“A review of the key facts confirms that railways are not a significant cause of wildfires in B.C., contrary to media and government speculation. The vast majority of wildfires are caused by nature when environmental conditions are extremely hot and dry, like those recently experienced in B.C.”

CP added that it employs “dedicated professionals who continually assess wildfire risk in close proximity to our track network. CP works in close collaboration with government agencies, including the B.C. Wildfire Service, to share information on wildfire activity and risk. On an ongoing basis, CP has a robust vegetation management plan to limit vegetation growth on its right-of-way and in yards; clears trees and brush in proximity to the right-of-way to prevent the vegetation encroachment and mitigate fire risk; CP soaks the track and surrounding vicinity with water to mitigate fire risk when undertaking railhead grinding, a critically important activity to maintain safe railway infrastructure; and during periods of extreme temperatures, increases the frequency of track inspections and reduces train speeds or halts traffic (determined by conditions) to maintain a safe rail infrastructure to support train operations.”

In response to the Lytton wildfire, CP has taken additional actions “to avoid adversely impacting local, provincial or national emergency response assets.” The railroad noted that it deployed additional emergency response assets to the area, including two water trucks carrying a total of 1,500 gallons and manpower stationed on standby on CP’s right-of-way at Lytton; 24/7 on-call supervisors stationed at Spences Bridge to respond quickly to any reports of fire along the right-of-way; a rail grinder staged in North Bend with a tank that can store water with a capacity of up to 4,500 gallons; a hi-rail support vehicle with a 250-gallon water tank; two high-capacity (2,800 gallon) hi-rail water trucks in Kamloops; firefighting resources on standby; and donation of a 5,000-gallon water bladder with fire pump/hose connections to Cooks Ferry First Nation.

CP has also pledged $1 million to support wildfire recovery efforts in Lytton: “As part of that, CP is assisting the village in acquiring emergency communications and computer equipment. CP also has offered to work directly with the Village of Lytton, Lytton First Nation, Thompson-Nicola Regional District and other agencies to provide resources and logistics support in the development of temporary housing facilities for families that have been displaced. Additionally, donations from CP employees are being matched to the Canadian Red Cross to aid in relief efforts.”