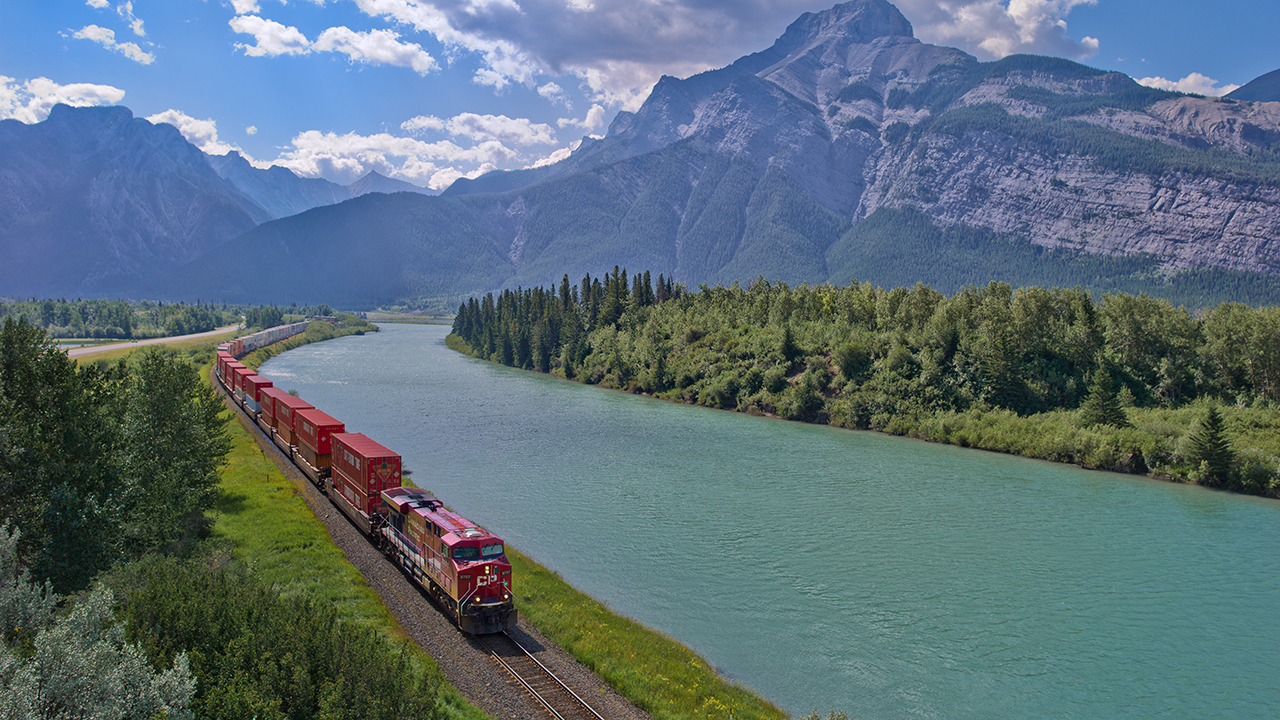 A terrible beauty. CP's route through the Western Mountains is beguiling but perfidious. Photo by David Duffin

If there are no atheists in foxholes, then there should now be no climate skeptics left among Canadian railroaders, as they move rapidly on what they do best: rebuild to keep the trains running.

In less than six months, tracks through the British Columbia mountains were stressed by a heat dome that killed 500 people from hyperthermia, the consequent forest fires shutting down operations for days, and then, in usually dry mid-November, catastrophic flooding left bridge pilings dangling like spider legs in mid-air.

After an initial failure of British Columbia’s government to prepare or respond (except to blame local mayors), a provincial state of emergency was belatedly declared Nov. 17. Armed forces were dispatched from across Canada to get food and fuel to stranded communities and apply combat engineering solutions to an environmental no-man’s land.

The railways did what they could to help. For example, a CN hi-rail carrying a four-person emergency ICU team bypassed highway mudslides between Chilliwack to Hope. VIA Rail turned its stranded eastbound Canadian streamliner into a muddy midnight special that evacuated 150 stranded motorists from Hope to Vancouver along sloppy but still passable tracks.

But, at least at the outset, there was little more that railroaders could do with a network dissected by new canyons and the smooth shave of mountainside ledges cut more than a century ago by Chinese laborers considered expendable and often hastily interred lineside in unmarked graves. Nor is there any more of the ancient lineside timber those workers squared for instant trestles. However …

CN and CP at this writing have been working on quantifying the damage, and CP now says trains will be back in service within days. The railroad reported reported Nov. 19 that service over its flood-ravished main line connecting Vancouver to the rest of Canada may be restored just prior to the U.S. Thanksgiving holiday. That would be a remarkable feat of engineering comparable to the original construction of the railway in the 1880s.

“Work to repair damaged infrastructure and restore service to the CP corridor between Kamloops and Vancouver continues around the clock,” said CP media representative Salem Woodrow. “Progress is being made with approximately 20 separate sections of track across this region already cleared or repaired. Work will continue through the weekend, and, barring any unforeseen issues, we currently estimate service will be restored mid-week.

“We are working closely with local and B.C. authorities to coordinate the delivery of critical materials, equipment, food and fuel as CP crews work to safely restore service.  That includes with the Ministry of Transportation and Infrastructure to assist in getting highways reopened as soon as it is safe to do so.”

Canadian Transport Minister Omar Alghabra said Nov. 18 that the Canadian railways were negotiating new interchange routes with U.S. lines. Canadian Pacific does have a connection at Sweetgrass, Mont., with BNSF used for occasional eastbound coal trains. But based on the progress CP is making, rerouting won’t be needed for very long.

Until service is restored, though, the most evident geographical solution to the main line washouts is routing both CN and CP trains over CP’s Crowsnest, Cranbrook and Moyie Subdivisions to the border interchange with Union Pacific at Eastport, Idaho. There is a limit to how much extra traffic can be absorbed by that bucolic route bridging its way across wild trout streams. Nor is it clear how much Canadian traffic UP and BNSF can add to their already busy mains along the Columbia River.

Regrettably, the old Kettle River Subdivision, which extended CP’s secondary southern main line to Vancouver, is now a bike trail. Except for the short Moyie Sub connecting Cranbrook to Eastport, all westbound  trains on the Cranbrook Sub veer sharply north  to connect with the now-crippled main line at Golden, B.C.

An unremarked sub-story is the precarious state of the high-rock metallurgical coal mines dotting the British Columbia side of the Continental Divide. The mines were already under intense international political pressure to cease polluting transboundary waters with selenium. Teck Resources spent C$1 billion on a treatment plant that failed. The Vancouver mining company is now quietly trying to pass on the hot potatoes, but prospects for a sale are poor since the buyer would assume the selenium liabilities, which cost Teck C$60 million in fines earlier this year.

The U.S. clearly wants the mines closed, and Teck may well decide to give up for good if CP can’t move the coal to the Roberts Bank ocean terminal within the next few weeks, which seems highly unlikely. In the meantime, some Teck coal is being diverted over CN’s line to Prince Rupert.

Canada wants relief from U.S. President Joe Biden’s plan to subsidize only U.S.-made electric vehicles, and coal mining could be a potential sacrifice to save the Canadian auto industry, which exports the bulk of its production to the U.S.

As with the COVID-19 impact on global supply chains, the full impact of 2021’s climate change catastrophe—clearly just the tip of a rapidly melting iceberg—will reverberate for years to come.