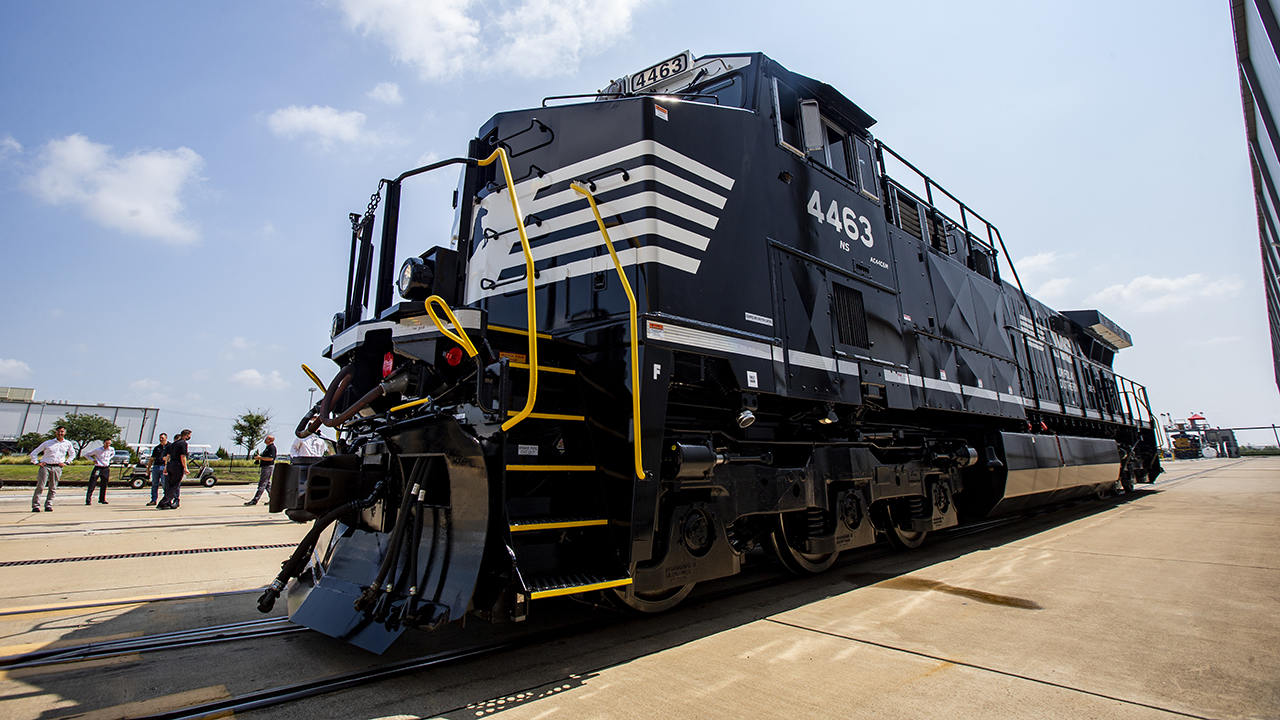 Wabtec on Aug. 6 celebrated modernizing its 1,000th locomotive in North and South America with delivery to Norfolk Southern (NS) of AC44C6M 4463, a rebuilt 1998-vintage GE Dash-9.

Trip Optimizer SmartHPT “provides incremental fuel savings by optimizing train performance for a given HPT (Horse Power per Ton) target,” Wabtec notes. “It is certified with the EPA at 5% fuel and emissions savings. Auto Idle identifies areas where the train has more horsepower than required and automatically idles the trailing units in the lead consist, saving additional fuel. The Smart Planner option provides a railroad the ability to limit the HPT of a train by making a horsepower-limited plan based on a customer-defined HPT limit for the train and route. The Network Control option automatically isolates locomotives in the lead consist using eMU/Interconsist routing. Isolated units will then follow their railroad-specific rules for shutting down.”

ITCM®, part of the METEORCOMM® Interoperable Train Control network® (ITCnet®), is “an advanced middleware messaging system customized for the railroad industry that supports seamless communication across multiple organizations in tens of thousands of remote endpoints,” the company notes. “It allows the back office and railroads to exchange messages regardless of their physical location or type of connectivity. It is currently utilized by Class I, short line and commuter railroads, system integrators, and Positive Train Control (PTC) hosting providers across the nation. This system supports PTC by coupling industry-leading hardware with advanced software to enable highly reliable interoperable train control communication.”

The rebuild into an AC44C6M yields “up to a 25% improvement in fuel efficiency; more than a 40% increase in reliability; up to a 55% increase in tractive effort; and up to a 20% reduction in maintenance, repair and overhaul expenses,” Wabtec reports. “The fuel efficiency benefits of these 1,000 locomotives have reduced carbon emissions by more than 1.4 million tons since 2015. That reduction is the equivalent of removing the emissions from 340,000 cars.”

NS accounts for 500 of the 1,000 locomotives Wabtec has upgraded. Each rebuild in the NS fleet reduces more than 500 tons of carbon emissions per year, according to Wabtec.

The modernization program also reduces emissions by reusing the existing steel on the locomotive through a requalification and remanufacturing process. “More than half of a locomotive’s critical components are reused, rebuilt, or remanufactured at least three times over their useful life,” Wabtec says. The company’s locomotive plants in Erie, Pa.; Fort Worth, Tex.; and Contagem, Brazil have reused more than 100,000 tons of steel to update the 1,000 locomotives.

“This achievement is a testament to the value that our locomotive modernization service provides to customers,” Wabtec Freight Services President Pascal Schweitzer says. “Our modernization program breathes new life and technological advancements into customers’ aging locomotives, while also reducing a railroad’s operating costs and carbon footprint.”

“Our partnership with Wabtec is one way we plan to achieve our target of a 42% reduction in emissions intensity by 2034,” says Tom Schnautz, NS Vice President-Advanced Train Control. “Wabtec’s program is maximizing the value of our locomotives, lowering operating costs and reducing emissions.” Schnautz told Railway Age that typical life expectancy for an NS locomotive is 25 years. The rebuild program on these approximately 20-year-old Dash-9s (there are 1,200 in the NS fleet) gives them at least another 10 years of service and makes them the equivalent of a new locomotive. “Dollar for dollar, compared to acquiring new units, the operating and cost savings are magnified,” he said.

In June, CSX teamed with Wabtec to modernize locomotives across its fleet.