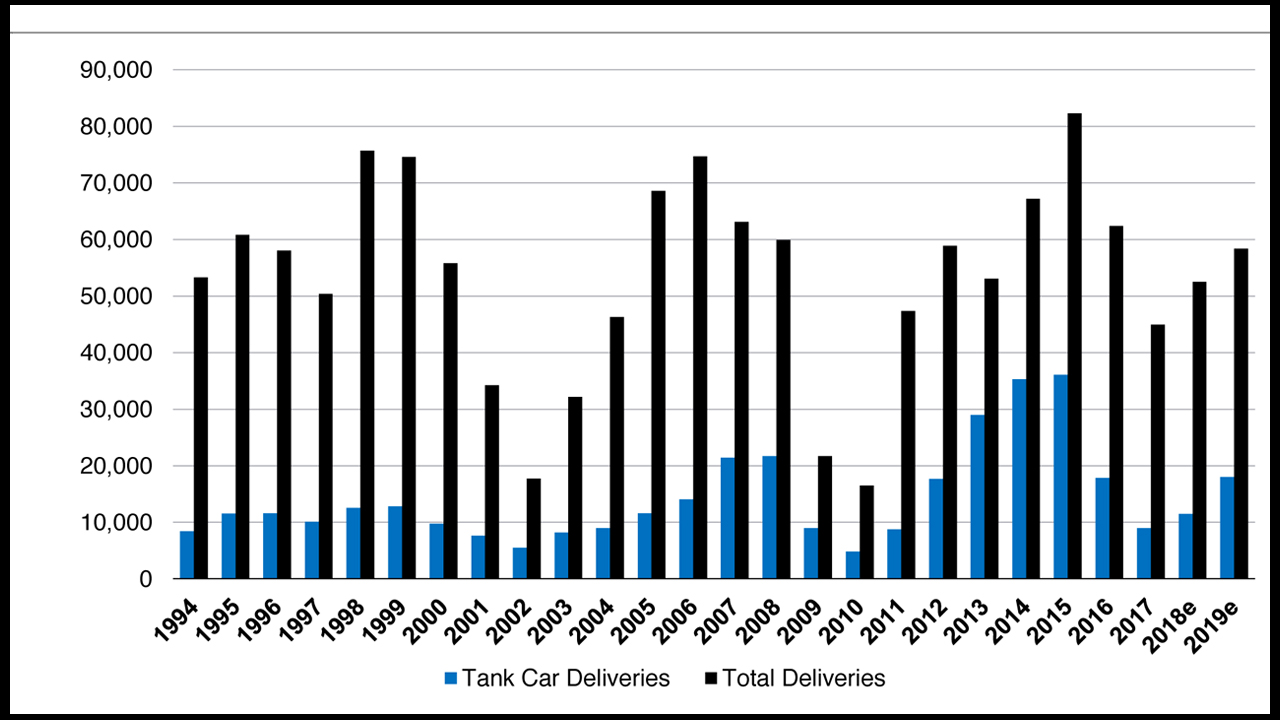 An estimated 64,000 DOT117J (new) and DOT117R (retrofit) tank cars will be produced over the 2019-2022 time frame as confidence grows in a tank car demand resurgence, according to Cowen and Company analyst Matt Elkott.

Cowen sees Trinity, ARI (whose acquisition by ITE was announced on Oct. 22) and Greenbrier as the main beneficiaries in a market where approximately 58,000 railcars overall will be produced in 2019, up by 2,000 units from Cowen’s previous forecast. 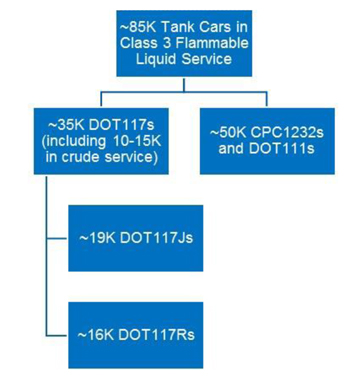 The 64,000 tank cars will be for Class 3 flammable liquid service, which includes crude, ethanol and other petroleum products. Cowen estimates the current Class 3 flammable liquid tank car fleet to be roughly 85,000 units, and is projecting 3% annual growth in this fleet on average over the next four years, driven by Canadian and Bakken CBR (crude by rail) gains and increases in other petroleum product shipments. This accounts for about 11,000 tank cars embedded in the 64,000 estimate.

“We expect 50,000 units to come from what we believe will be an accelerated phase-out or retrofitting of older tank cars, namely the DOT111 and CPC1232,” said Elkott. “The remaining 3,000 units represent our estimate for replacements of existing DOT117 tank cars due to damage or other reasons over the next four years.”

“There is no scientific way of gauging what percentage of the roughly 50,000 DOT111s and CPC1232s currently in flammable liquid service will be replaced with DOT117Js as opposed to retrofitted ones,” Elkott noted. “Some Class I railroads appear to be mandating use of the DOT117J on all new crude contracts. We believe others may allow the use of the DOT117R for certain flammables, but will impose fees.”

“We are raising our 2018 and 2019 North American railcar industry production estimates to approximately 53,000 units and 58,000 units, from approximately 52,000 and 56,000 units, respectively,” said Elkott. “We expect tank cars as a percentage of total deliveries to increase from 20% in 2017 to 22% in 2018 and 31% in 2019. This would still be well below the peak 55% reached in 2013 and the 52% and 44% in 2014 and 2015, respectively. Some customers may attempt to pull forward delivery dates on existing orders due to improving freight demand and out of concern about potential manufacturing capacity issues if the current strength continues or intensifies, something that no longer seems like a farfetched scenario.”