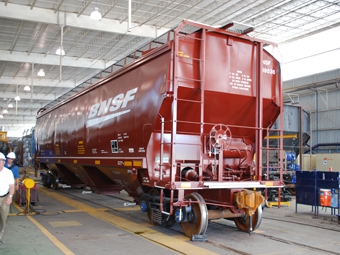 Railcar builder Greenbrier Cos. reported weaker revenue and earnings in the fiscal third quarter from a year ago amid “challenging” markets that are expected to continue into 2018.

The company also declared a quarterly dividend of 22 cents per share.

Orders totaled 11,000 cars in the quarter, including 6,000 as part of a services and supply agreement with lessor Mitsubishi UFJ Lease & Finance of Japan.

New railcar deliveries totaled 2,600 units, down from 3,900 units for the quarter ended Feb. 28, 2017, due to the timing of railcar syndications and lower production for some car types.

“We are encouraged by the strong order activity in our third quarter of 11,000 units, and especially in our North American and European markets,” said Greenbrier Chairman and Chief Executive William A. Furman, in a statement accompanying the results. “Excluding the 6,000 units from the MUL transaction, orders in these traditional markets totaled 5,000 units, the strongest level achieved in the past two years. Our backlog of 31,000 railcar units [up from 22,600 the previous quarter] places Greenbrier on a strong footing as we approach fiscal 2018. Since the beginning of the year we have observed sustained and increasing railcar loadings across commodity types, as well as decreasing rail velocity. Both are positive indicators for the near term demand environment.”

Furman added, “While we see emerging improvements in North American and European rail markets, we still expect a challenging commercial environment into calendar 2018. Although unforeseen developments in our markets can always occur, we remain cautiously optimistic.”

In addition to the MUL agreement in the quarter, Greenbrier formed European venture Greenbrier-Astra Rail, and increased its stake in Latin ventures Greenbrier-Maxion to 60% and to 24.5% inAmsted-Maxion Cruzeiro.

“The strong orders underscore the Greenbrier’s efforts to grow market share in a sluggish environment and reinforce our view of a railcar industry demand inflection point,” observes Cowen and Company analyst Matt Elkott. “The order activity should be well received, but we would not rule out some volatility in the stock today as investors attempt to make sense of all the pieces of a noisy quarter.”

Deliveries were lower than expected, and the Greenbrier “appears to have placed some cars on its balance sheet,” says Elkott. “It attributed lower deliveries to timing of railcar syndications as well as lower production rates for certain car types. Meanwhile, Greenbrier raised its full-year delivery guidance to 15K-16K units. The company’s prior FY17 guidance was for deliveries of 14K-16K units. This would imply an elevated level of deliveries in fiscal 4Q17 and potential margin pressure based on the EPS guidance, whose range was narrowed. We are not sure if Astra Rail is now reflected in GBX’s guidance or if the fourth quarter is expected to have any more unusual below-the-operating-line items.” 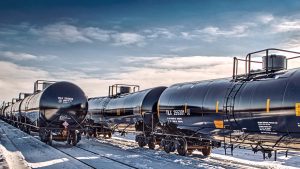 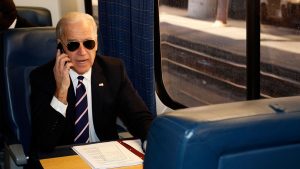