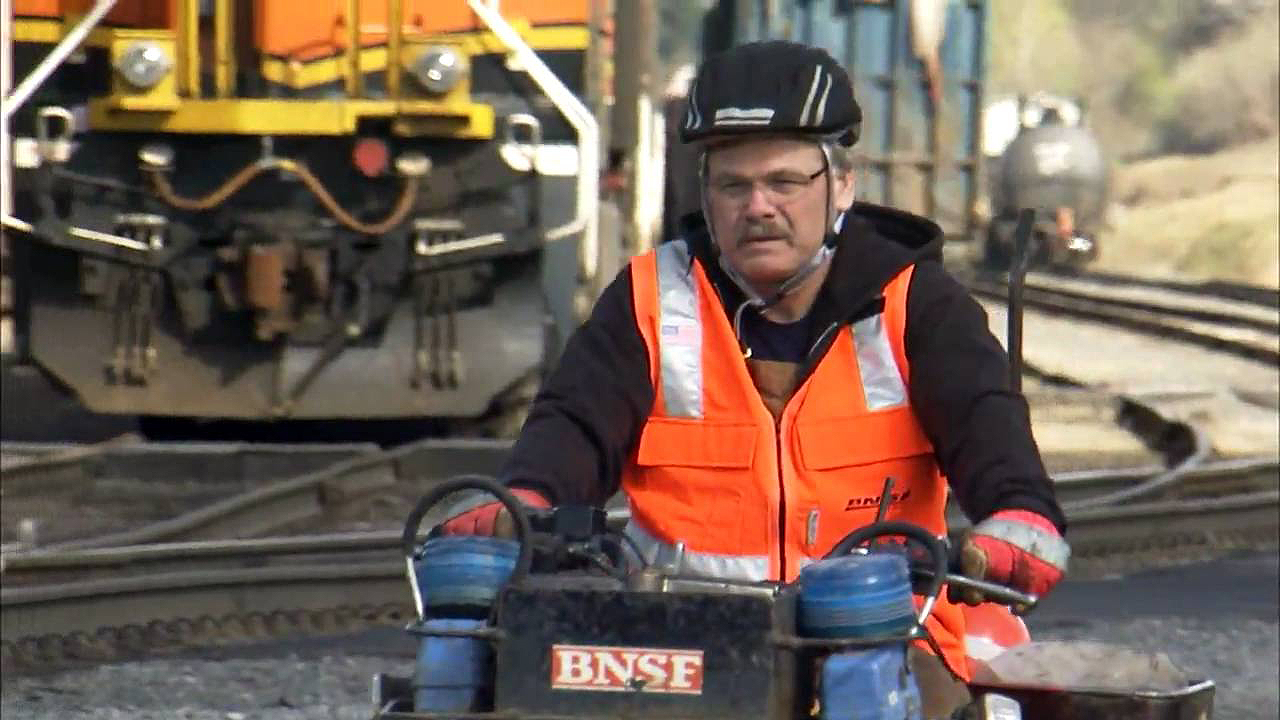 Sorry for the bother, but while you were out, away, on vacation, taking your first trip in 18 months, or otherwise engaged, someone dropped the other shoe and from a significant altitude. The bigger fish was dipped, battered and tossed into the deep fryer. The wolf was at the door with a muzzle full of jokes.

While we were all getting knicker-twisted about PSR, or calmly contemplating the changes that might be triggered by the expansion of the Panama Canal, or not so calmly noting the decline in operating revenue and revenue ton-miles, the inability to even come close to the 2007 mark for freight train-miles (and other indices of a not quite robust recent past), something even more challenging occurred.

As reported by Frank N. Wilner in Railway Age, arbitration cases were decided that require the SMART-Transportation Division union (representing railroad conductors and brakemen and women) to engage in collective bargaining with several rail carriers over minimum crew size, that minimum currently being two.

Minimum crew size has been a bargaining issue before I hired out way back in 1972, and I’m not including the great struggle over the presence of firemen.

Back in my early days the “regular” crew size was four—engineer and conductor plus two. For road and yard jobs, if my memories are correct, the crew was four. There were exceptions, “experiments” really, to the rule, negotiated locally. I remember the one or two yard jobs at Chicago’s Proviso Yard that were the conductor plus one, and even one at conductor plus zero, at a higher rate of pay, of course, and all train crew members had to be provided portable radios.

The jobs were coveted equally for their higher rates and the radios. Not even the skatemen in the hump’s class yard had to beprovided radios, which might give you an idea of how slow railroads were on the uptake.

The first time I heard about a one-plus-one (locomotive engineer and conductor) road crew was also in Chicago, in the 1970s. The then-Illinois Central Gulf (IGC) was running an experimental piggyback service between East St. Louis and Chicago with a locomotive engineer and conductor only. Train size was limited to no more than 20 intermodal cars, and ran to an eight-hour schedule. I forget if there was a crew change enroute, but I remember hearing the crew on the radio one morning, and did they ever sound tired.

I’m also a bit hazy on the disposition of the cars—whether the northbound (directions of movement on the ICG were northbound and southbound) terminated at Glenn Yard, or dropped the cars at Bridgeport for a yard crew out of Ash Street, and went light engine to … somewhere.

Conrail negotiated a reduced minimum crew size, and who will ever forget the arguments over radios and radio money that drove several trainmasters stark raving mad? Then one day, working the hump, I heard on the radio a light engine move from Allentown on the Lehigh main headed to the Meadows, engineer-only, and thought, “That’s something different.”

Anyway, by the time I retired from active service, the standard crew size was one-plus-one, with modifications of what and who constituted the “ones” when RCLs (remote-control locomotives) were the motive power.

There’s a history to this, clearly, and the history is a significant reduction in crew sizes over the years through the application of technologies, particularly radios: digital, analog, voice, data. EOT devices? Radio technology, conveying distance and speed information to the locomotive engineer on a reverse move. Radio technology replaced lanterns, flags and hand signals. Hands upon hands were essential before train line airbrakes, and when somebody having line-of-sight contact with a signal also had to have line-of-sight contact with the engineer.

Into this mix steps the most intensive application of radio technology to train control, PTC, which uses digital data radio to orient and locate the locomotive so the onboard computers recording and enforcing limitations, restrictions and amendments to the locomotive’s operating authority knows where the locomotive.

So, although I’ve never bought into the argument that multiple crew members are inherently safer for train operations than solo operations, I would urge the executive leadership of the railroads now empowered to bargain with the unions now compelled to bargain to “go slow.” Take it very slowly. The transition to a solo crew member has dramatic implications for the simple mechanics of train operations:

• Operation of hand-thrown switches.
• Opening and locking of switches on main tracks.
• Yarding of trains.
• Operating when grade crossing apparatus is reported inoperative.
• Copying and repeating back a mandatory directive.
• Working with a utility conductor.
• Application of rules pertaining to the inspection of passing trains and one’s own train
• Losing digital radio communication in PTC territory, etc., etc.

Yes, crew size reduction is inevitable, and yes the inevitability has to be managed. Labor organizations will (possibly) insist on limitations to train length and tonnage for solo operations. That must be negotiated, intelligently.

Labor organizations will (possibly) insist that solo operations be restricted to locomotives and the portions of the railroad where PTC is operative. Those must be negotiated intelligently, and thus, carriers should be prepared to produce the records of PTC reliability, the failure rates of PTC to initialize, and the rate of enroute failures and cut-outs.

The carriers will have to negotiate what will occur if the PTC apparatus on the locomotive fails enroute. How, when and where will the solo locomotive engineer receive a supplementary crew member? And what happens when a system outage of PTC occurs, impacting multiple main track train movements, or when a single assignment includes operation over PTC and non-PTC main track territory?

My free advice is go slowly, for many reasons, including this one: Crew size reduction has been driven, in large part, in the substitution and application of radio technologies for communicating near-vital information to the person in control of the motive power—for example, trainline air continuity and brake functionality at and to the rear of the train.

Failure of that radio communication is near-vital in that it prevents proper compliance with vital information regarding speed and occupancy. Communications interruption with a duration of seconds (not minutes), or lack of conformity of action initiated at the head end with the conditions at the rear end of the train within seconds, has to be integrated into the train control apparatus to initiate maximum service braking application. Clearly, this type of response to a non-response should not be limited to solo operations.

Moreover, railroads must become capable of determining end-of-train and maintaining positive safe train separation rather than grandfathering in the risk of collision by substituting “restricted speed” requirements for a positive stop.

Go slow, I say. The technology may not be up to the simple mechanical requirements of train operations, regardless of the awards made by any or all boards of arbitration.