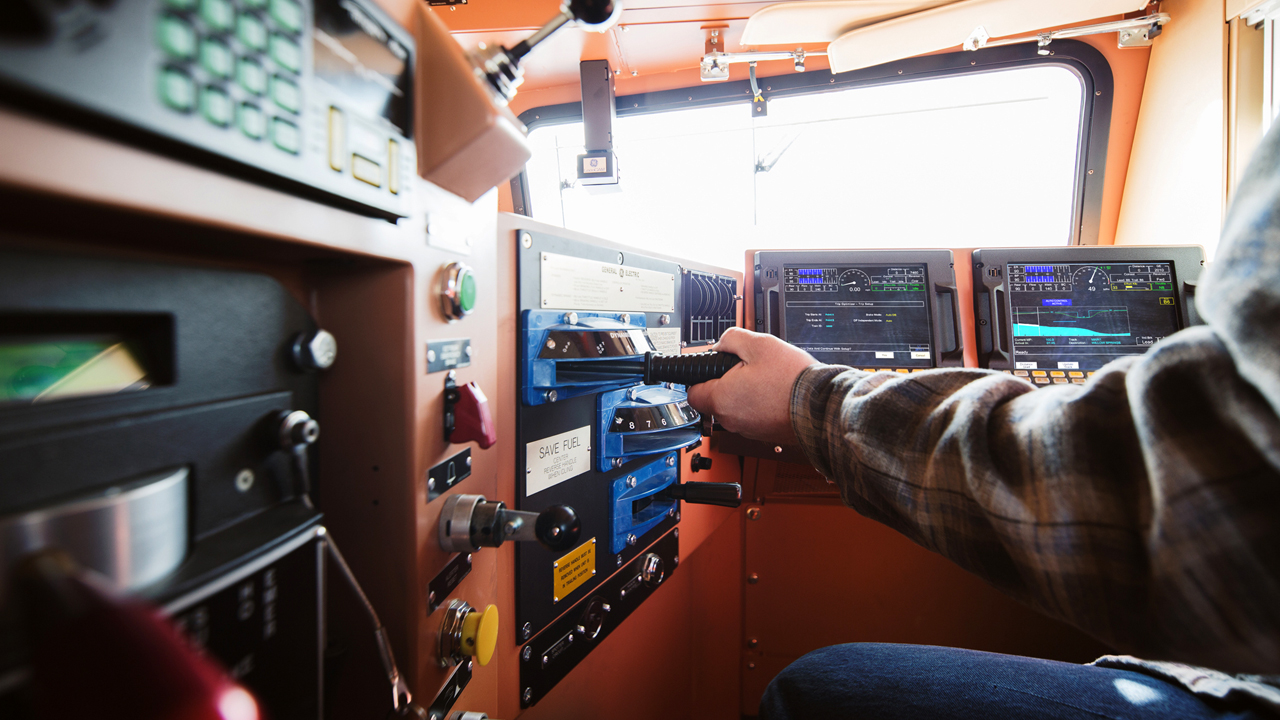 July 29, 2021, FRANK N. WILNER, reporting from Washington D.C. (Copyright© 2021, Railway Age): Another step in a lengthy, tortuous and torturous slog toward reducing—where efficient and safe—train crew size to just one locomotive engineer was achieved by three Class I railroads July 28 with the finalizing of four binding arbitration awards.

The awards require the Transportation Division of the Sheet Metal, Air, Rail and Transportation Workers (SMART-TD) union, which represents conductors, to bargain collectively with those Class I railroads and some smaller carriers over minimum train crew size that currently is two people—one engineer and one conductor.

The award, requiring collective bargaining on future minimum train crew size, turned on decades-earlier crew size reductions whose agreements contained moratoriums on issues subsequently eligible for collective bargaining. As those moratoriums were negotiated on individual railroads prior to mergers that reduced the North American railroad map from some 30 Class I railroads to but seven today, not all conductors are affected, as only some moratoriums made specific reference to crew size. Those agreements were exempted from the arbitration award.

On Union Pacific, for example, conductors working lines of legacy railroads Chicago & North Western and Southern Pacific are exempt from the arbitration award. It is possible—even probable—that the outcome will encompass 100% of Class I conductors as productivity improvements drive pricing, routing, line abandonment and worker layoff decisions.

Productivity improvements have been crucial since the collapse of coal transportation demand—long the railroads’ profitable bedrock traffic. There is now an increasing dependence on lower-margin trailers and containers that are particularly susceptible to diversion to trucking firms operating over government-subsidized highways, employing non-union owner-operators working for a fraction of rail worker compensation, and who themselves face replacement by more efficient autonomous vehicles.

It is the development of Positive Train Control (PTC)—a $15 billion-plus investment to eliminate human-factor-caused train accidents—that permits crew size reduction. Ironically, SMART-TD has been among the most outspoken advocates for its development and implementation. When and where crew size is reduced to one locomotive engineer, many of the displaced conductors will redeployed to ground-based positions.

Some railroads previously have offered substantial income protection packages to those adversely affected by crew size reduction, such as full wages and benefits until retirement age—and no requirement to report to any railroad facility, meaning they could pursue other non-railroad job opportunities while still collecting their railroad wages and benefits. SMART-TD’s national leadership urged its members to vote down any such agreements if presented to them by SMART-TD general committees.

The outcome of crew size reduction negotiations remains murky, although no labor union ever has done better than slow the introduction of new technology. The noun “sabotage” is derived from the French word “sabots”—wooden shoes thrown into the gears of mechanical textile looms by 15th century workers in failed hopes of thwarting mechanization and automation.

The arbitration award requires collective bargaining under provisions of the Railway Labor Act, meaning a work stoppage cannot occur prior to government-directed mediation and subsequent investigation of the issues by a White House named Presidential Emergency Board (PEB), which issues non-binding recommendations for settlement.

History records that where voluntary agreements are not reached, Congress quickly ends a work stoppage on one or more major railroads, often based on PEB recommendations. The last choice of labor and management is turning over to a third party any decision-making over their futures—a “trick bag” from which disagreeable surprises emerge.

Significantly, the July 28 arbitration award requires that negotiations be conducted railroad-by-railroad as opposed to national handling. This means that the current round of national bargaining over wages, benefits and work rules—which began in November 2019—will continue on a separate track. There may be overlaps, such as a carrier demand that if SMART-TD continues its opposition to crew size reduction that conductor wages on such railroads be reduced to provide equivalent economic savings. “There are a lot of tentacles,” said a probable negotiator in asking not to be identified by party of interest or name.

The arbitration panel grew out of carrier-initiated litigation commenced 20 months ago to answer the question of whether the moratoriums applied to negotiations on crew size.

The binding arbitration decision as to which moratoriums failed to include minimum crew size was a 2-1 vote, with the labor member dissenting. The arbitrators were:

Separately, SMART-TD and its rival Brotherhood of Locomotive Engineers and Trainmen (BLET) have been seeking congressional legislation mandating two-person crews. Although such a mandate is in draft legislation as part of a proposed $1.2 trillion infrastructure bill now being debated in the Senate, the provision is not expected to survive Senate passage owing to strong railroad lobbying of Republicans and the difficulty of the slim Senate Democratic majority to find a sufficient number of Republican votes for the bill’s passage.

Although numerous state legislatures have passed bills mandating two-person crews, they remain moot so long as existing moratoriums are in place—including moratoriums found deficient and subject to negotiation by the arbitration award. Railroads have yet to mount a serious challenge that such individual state mandates would create a patchwork of inconsistency interfering with the free flow of interstate commerce.

Individual state impediments to the free flow of interstate commerce were the catalyst for the 1887 Act to Regulate Commerce that federalized most railroad regulation. The so-called Dormant Commerce Clause—an implicit prohibition against states passing legislation discriminating against, or unduly burdening, interstate commerce, even in the absence of federal legislation regulating that activity—was used by the Supreme Court to limit further state restrictions on interstate railroads.

In 2009, the Federal Railroad Administration (FRA) said it had “no factual evidence to support [a] prohibition against one-person crew operations.” Thus, a subsequent SMART-TD attempt to gain from the FRA a minimum two-person crew mandate—when a former SMART-TD official was serving as FRA Administrator—failed to advance for lack of evidence beyond anecdotal assertions that one-person crews are less safe. However, when a subsequent FRA Administrator with a rail management background sought to preempt state minimum crew laws, a federal appeals court ruled the attempt “arbitrary and capricious” and that railroad assertions of one-person crew safety “did not withstand scrutiny.”

The National Transportation Safety Board has never opposed phasing out two-person crews where PTC is implemented. For example, Amtrak’s high-speed Acela trains operate on the Northeast Corridor with a lone engineer.

SMART-TD also will be looking over its shoulder at BLET, which has in place on BNSF a currently dormant provision that, should BNSF commence one-person crews, the pay of locomotive engineers would be increased—known as lonesome pay. Were other carriers to offer similar provisions to BLET, BLET’s current support for two-person crews could erode owing to BLET-member pressure. In 2001, the BLET negotiated an engineer-only agreement on Indiana Rail Road.

The two organizations have a long history of warfare and poaching of each other’s members, although they have become allies in recent years. Relations remain strained over SMART-TD’s predecessor United Transportation Union negotiating an agreement allowing conductor use of remote-control beltpacks in switch yards to operate locomotives, which cost the jobs of locomotive engineers. Subsequently, BLET sought to displace conductors by claiming remote-control device work on switch operations outside yards.

Frank N. Wilner is author of “Understanding the Railway Labor Act” and the soon-to-be-published “Railroads and Economic Regulation,” available from Simmons-Boardman Books, a Railway Age sister company. He earned undergraduate degrees in economics and labor relations from Virginia Tech and held a White House appointment as a chief of staff at the Surface Transportation Board. For two decades, he was an Assistant Vice President for Policy at the Association of American Railroads, and for 11 years was Director of Public Relations for the United Transportation Union (now SMART-TD). He held managerial posts at several freight railroads and was an elected president of the Association for Transportation Law, Logistics and Policy.