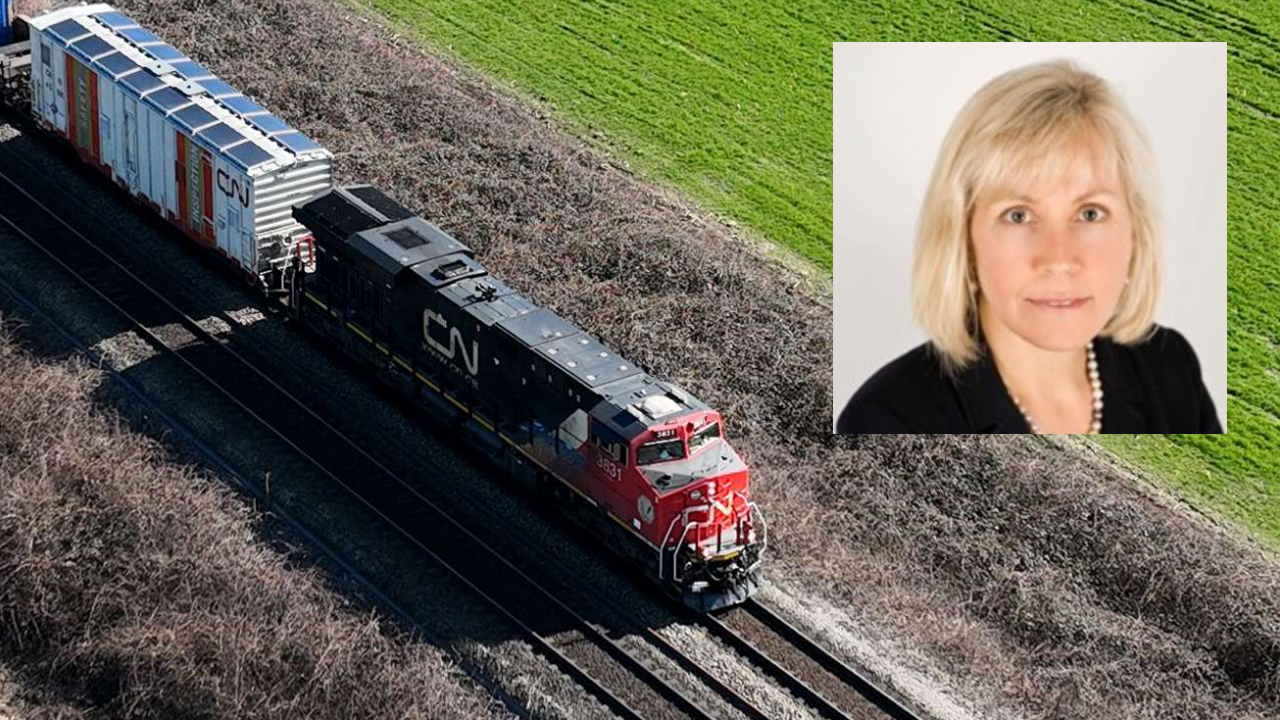 Shauneen Bruder (pictured) and 10 other Director nominees proposed by CN management were elected to the CN Board at the railroad’s annual meeting of shareholders on May 20.

Shauneen Bruder has been elected Chair of the CN Board of Directors, succeeding Robert Pace, who in March 2021 announced he would not seek re-election when his term expired.

Bruder, 62, and 10 other Director nominees proposed by CN management were elected at the Class I railroad’s annual meeting of shareholders on May 20.

Bruder joined the CN Board in 2017, and served as Executive Vice President, Operations at the Royal Bank of Canada until her retirement on Oct. 31, 2019.

“I am honored to become the Chair of the CN Board of Directors,” Bruder said. “I would like to thank Robert Pace for his leadership over many years and wish him the best as he retires from the Board. I am also pleased to welcome David Freeman, Robert Knight and Susan C. Jones to the Board. They bring to their roles a deep expertise in transportation, operations and executive leadership. … The newly elected Board and I very much look forward to working with our new CEO, Tracy Robinson.

“I would also like to reiterate our commitment to recruiting a francophone and Quebec-based Director. We intend to appoint the new Director in the coming months. We have selected a leading Montreal-based search firm to assist us. …”

The other elected Directors are:

• David Freeman, 67: New Corporate Director. After a 19-year career at BNSF, during which he held various senior positions, he retired in early 2020 as Executive Vice President of Operations.

• Denise Gray, 59: Joined the Board in 2021. She is the Director, External Affairs & Government Relations, North America for LG Energy Solution Michigan Inc., U.S.

• Justin M. Howell, 51: Joined the Board in 2021. He is Senior Investment Manager for Cascade Asset Management Co.

• Susan C. Jones, 52. New Corporate Director. She served as Executive Vice President and CEO of the Potash Business Unit at Nutrien Ltd. until her retirement in 2019.

• Robert Knight, 64: New Corporate Director. Knight is the former Chief Financial Officer of Union Pacific Corporation, a position he held for 15 years before retiring in December 2019.

• Margaret A. McKenzie, 60: Joined the Board in 2020 as Corporate Director. She has more than 30 years’ experience in the energy sector where she developed expertise in financial reporting, treasury, corporate finance and risk management.

• Tracy Robinson, 58: She joined CN as President and CEO and the CN Board on Feb. 28, 2022, replacing the retiring JJ Ruest (Railway Age’s 2019 Railroader of the Year), who depart CN’s Board the same day but remained in an advisory role until March 31 “to ensure a seamless transition.”