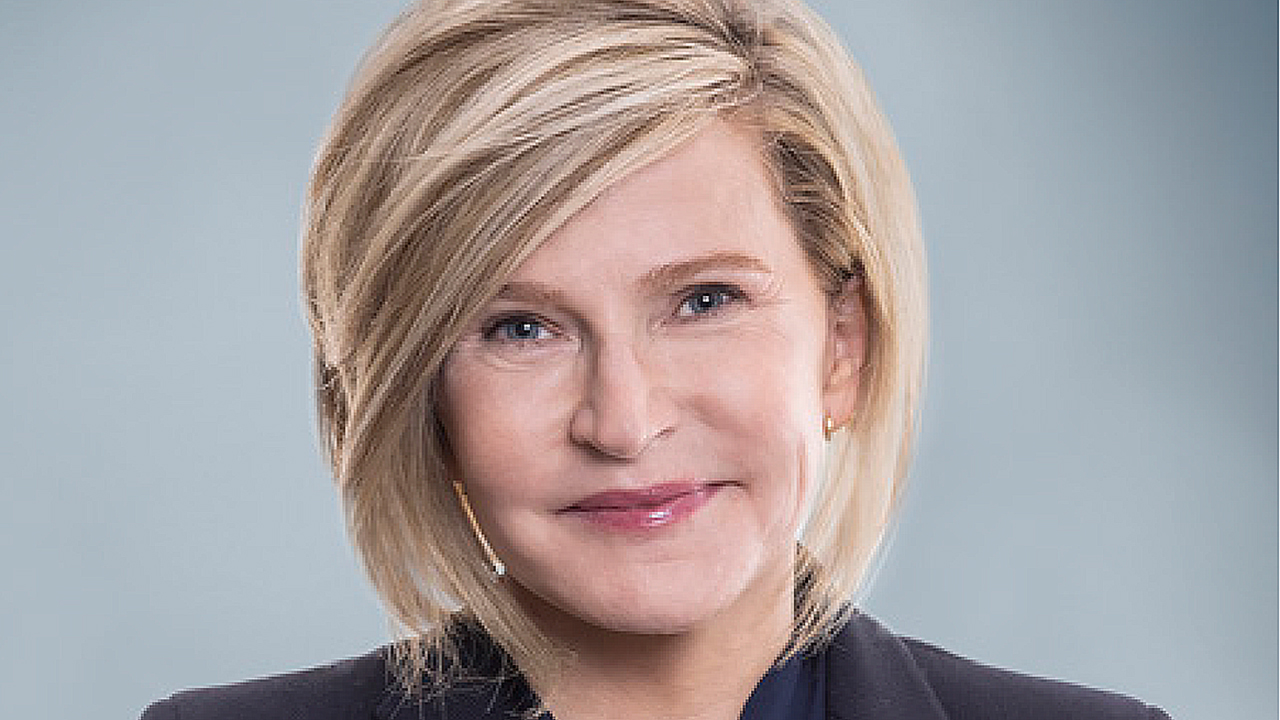 Tracy Robinson became CN President and CEO on Feb. 28, only the second woman in Class I history in that role.

January 25, 2022, will be remembered as the day CN achieved, in hockey parlance, a hat trick (three successes of the same kind, especially consecutive ones within a limited period; i.e. a hockey player who scores three goals in the same game). The Class I appointed a new President and CEO—who spent nearly 30 years at rival Class I Canadian Pacific; entered into a “Resolution Agreement” with beneficial shareholder and 2021 antagonist hedge fund TCI; and posted fourth-quarter 2021 results it calls “outstanding.”

Tracy Robinson will assume CN’s throttle effective Feb. 28, replacing the retiring JJ Ruest (Railway Age’s 2019 Railroader of the Year), who will depart CN’s Board the same day but will remain at CN in an advisory role until March 31 “to ensure a seamless transition.” Only the second woman after BNSF’s Katie Farmer to become a Class I railroad president and CEO, Robinson also joins the company’s board of directors. She will be joining CN from TC Energy, where she is Executive Vice President, and President of both Canadian Natural Gas Pipelines and Coastal GasLink.

Prior to joining TC Energy, Robinson spent 27 years at Canadian Pacific in executive roles spanning Commercial, Operations and Finance. “Throughout her professional career, Robinson has held a number of industry and private board positions, and currently serves as a member of the Board of the Business Council of British Columbia and on the Campaign Committee and the Dean’s Advisory Council at the Edward’s School of Business of the University of Saskatchewan,” CN noted. “She also represents TC Energy on the Board of the Canadian Gas Association, is a member of the Business Council of Alberta, and is on the Board of STARS (Shock Trauma Air Rescue Service, a Canadian non-profit helicopter air ambulance service). She fully understands and respects Quebec’s rich cultural and linguistic reality and distinctiveness and has made it a personal priority to build proficiency in French. She is a well-respected and seasoned public company executive who brings more than 35 years of operational management, strategy development and project execution experience to drive growth and profitability to CN. She has a proven track record as an extraordinary high-performing leader, for which she is highly regarded within the Canadian federal and provincial regulated natural gas industry and beyond.”

“This is a transformational period at CN, and I couldn’t be more excited about the opportunities ahead,” said Robinson. “Our focus is on building the railway of the future—one that creates shareholder value by meeting the needs of our customers, employees, communities, and the economies that depend on us, safely, reliably, and efficiently. I look forward to working closely with CN’s extremely talented railroaders, Board, and management team as we take CN to the next level of performance and industry leadership. I also want to say that I respect and value CN’s rich history in Montréal and in Québec, where the common and official language is French. I am excited to be returning to the wonderful city of Montréal, and I have already begun French lessons to ensure I am able to fully embrace the experience of living in Québec and communicate with CN’s valued employees and customers across the continent.”

The second piece of CN’s hat trick is a Resolution Agreement with CIFF Capital and TCI (collectively “TCI”) in which TCI, shifting its stance from attack to embrace, has agreed to withdraw its requisition for a Special Meeting of Shareholders that was previously scheduled to be held on March 22, and support the election of all CN Director nominees at the 2022 and 2023 AGMs. TCI’s conciliatory move follows CN’s Board changes, which include committing to appoint two new independent Directors Board by no later than its 2022 AGM.

“The appointments of the two future independent directors to the Board have been mutually agreed between CN and TCI in the Resolution Agreement,” CN said. “As part of that Resolution Agreement, in the event that either of the two new independent Directors are unable to serve on the Board, CN and TCI have agreed to mutually identify up to two alternate independent Directors with North American railroad experience prior to the 2022 AGM.”

“We are pleased to reach an arrangement that will strengthen CN’s Board with the addition of two new highly qualified Directors,” said TCI Founder and Portfolio Manager Chris Hohn, who until only recently had called the company a failure. “TCI looks forward to constructive future engagement with CN.”

Hat trick component three: For the fourth quarter and year ended Dec. 31, 2021, CN said it “delivered solid operating and financial performance across the board,” with adjusted diluted earnings per share (EPS) growing 20% in the fourth quarter to C$1.71, and an adjusted operating ratio (OR) improving to a fourth-quarter record of 57.9%. For the same period, the CN reported diluted EPS growth of 18% to C$1.69, while the OR improved to 58.3%.

Operating performance improved across most measures in the fourth quarter of 2021 when compared to the same period in 2020:

CN’s operating performance “improved across most measures when compared to 2020, specifically through network train speed, dwell and car velocity, despite negative impacts from the polar vortex in February, the forest fires in Western Canada over the summer and the washouts in British Columbia caused by severe rain and flooding, resulting in a network shutdown in the region for three weeks in the fourth quarter,” CN noted. “The company capitalized on its prior year’s strategic investments in its infrastructure and its continued focus on efficiency and network fluidity. In addition, our fuel initiatives allowed us to achieve an all-time record fuel efficiency, which improved by 3% to a record 0.867 U.S. gallons of locomotive fuel consumed per 1,000 GTMs.

CN’s Board of Directors approved a 19% increase to CN’s 2022 quarterly cash dividend, effective for the first quarter of 2022. “This is the 26th consecutive year of dividend increases, demonstrating our confidence in our long-term financial health,” CN said. “In addition, the Board also approved a new NCIB (normal course issuer bid) that permits CN to purchase, for cancellation, over a 12-month period, up to 42 million common shares, starting on Feb. 1, 2022, and ending no later than Jan. 31, 2023.”

“I would like to thank our dedicated team of railroaders for delivering once again despite extreme weather and disruptive global supply chain issues,” said JJ Ruest. The last months of 2021 allowed us to tangibly demonstrate our resilience, our ability to make significant progress against the goals of our Strategic Plan, and what it means to build the premier railway of the 21st century. Our previous strategic investments in safety, technology and capacity enabled us to continue delivering high quality service to customers while generating profitable growth and enhanced value to shareholders. While I’ll be retiring, I am excited to see what CN’s world-class team will accomplish as they continue to lead the next transformation of the industry by delivering high-quality service to our customers and to the communities we serve, while driving sustainable returns to shareholders over the long-term.”

Cowen Insight: “Record OR Sends CEO Off in Style”

“CN’s Q4 results shined despite $125MM in lost revenues from severe weather, as CNI beat expectations on the top and bottom line,” Cowen and Company Managing Director and Railway Age Wall Street Contributing Editor Jason Seidl said in his analysis. “The 2022 outlook calls for EPS growth well above previous forecasts as pricing and cost initiatives bear fruit. We bid farewell to JJ Ruest as CNI welcomes new leadership as Tracy Robinson shoulders the President and CEO role. We increase our PT to $134 as we roll our model forward.

“Q4 revenues grew 3%, coming in above expectations by ~2% despite carloads declining 10%, as 13% increase in revenue per carload displayed the strong pricing environment in the quarter. The adjusted OR of 57.9% handily beat our forecast of 60.4%, and adjusted EPS of C$1.71 came in well above the consensus figure of C$1.52. These results were achieved despite significant weather that caused CNI’s BC main line to Vancouver to be down from November 14 to December 4, which the company estimated to be C$120MM to C$130MM in lost revenue (a portion of which was likely made up later in December, although cold weather held some of this back).

“Strong pricing and cost initiatives were the two levers CNI pulled to finish 2021; in December, the company renewed ~15% of its total book of business with an average rate of 5.5%. In the first half of 2022, another 25% of the book is being renewed with rates that we believe will be higher than the 5.5% seen in December. This is a noteworthy opportunity for CNI and it is not afraid to lean into price given the market dynamics. On the cost side, CNI ended the quarter with 1,150 fewer employees sequentially after the company announced its strategic planning on Sept.17. CNI should benefit from this headcount reduction through 2022.

“Management provided a 2022 outlook that called for approximately 20% adjusted EPS growth, putting next year around C$7.13, above the consensus figure of C$6.88. Management assumes low-single-digit volume growth (primarily 2H weighted, similar to the other two Class I’s that have already reported) coupled with strong pricing that should, along with continued cost initiatives, lead CNI to deliver a 57% OR in 2022. We previously modeled above this range, given the uncertainness of both CNI’s core business and murky macro outlook. Capex is expected to be ~17% of revenues to end 2022 with ~C$4bn in FCF. The Board announced a new share repurchase program beginning Feb. 1 through the year of C$5bn, as well as a 19% increase in dividends for 2022.”