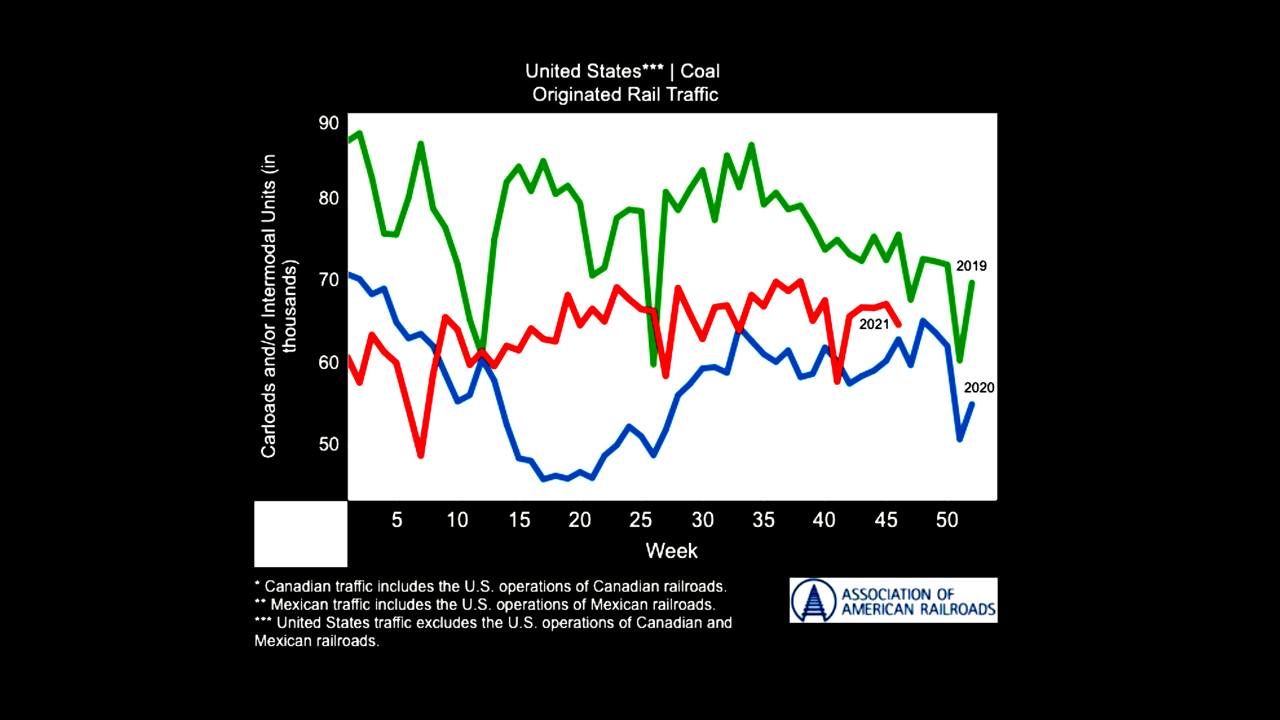 FINANCIAL EDGE, DECEMBER 2021 ISSUE: Now that the drama around the CP-KCS merger has finally subsided, the rail market has to occupy itself with other more mundane issues, such as the forward trajectory of coal loadings. Representing 12% of railcar loadings (even in its diminished state), coal remains a critical industry issue.

It was noteworthy, but underreported, that at the end of October, many utilities were obligated to provide state regulatory bodies sets of plans to address a 2020 EPA rule requiring a reduction of the pollutants in wastewater discharges from power plants. The 2020 rule was a Trump Administration rollback/softening of an Obama Administration rule. The rollback decreased the number of impacted power generating facilities from more than 100 to 75. This is out of a total of more than 900 coal-fired generating stations in the U.S. Included in the utilities most impacted are some large coal burners like Southern Company and NRG.

The world’s energy markets are in some form of disarray. Panic might be too strong of a word, but chaos seems just about right. Soaring natural gas prices in Europe have led to increasing export coal demand. Higher oil prices have led President Biden to dip into strategic oil reserves. As much of the U.S. contemplates the impact of a La Niña winter, the weather picture continues to remain unsettled. The doom and gloom contingency expects another Texas-style (if not sized) power grid failure sometime in winter 2021-22.

— “Let’s not be naïve and confuse demand for railcars with a demand for coal. Coal loadings continue to languish below 2019 levels. The trend here is irreversible.” —

In the midst of these events, coal railcars have been having a moment (see the 2022 Railroad Financial Desk Book in the October issue). Indeed, the price of natural gas seems to have increased certain pockets of coal demand where none may have existed at this time last year.

In spite of the recent uptick, let’s not be naïve and confuse demand for railcars with a demand for coal. Coal loadings continue to languish below 2019 levels (see illustration above). The trend here is irreversible. The Trump rollback muted the number of plants impacted by the EPA rule. It did not eliminate it. The ongoing momentum against coal echoes the sentiment put forth in March 2021’s Financial Edge: No matter what kind of energy market chaos exists right now and to what kind of energy market chaos the country may be headed in the future, burning more coal is not on the national or political agenda. It is more likely that power generators will be decommissioning those facilities impacted by the EPA reg (or converting them to natural gas) before the 2028 deadline.

Furthermore, don’t be surprised if those additional plants that escaped the EPA today find their way back onto the agenda as President Biden uses the remainder of his term to expand the scope of the EPA regulation. Ongoing anti-coal bias makes one wonder two things: One, as the U.S. government peacocks about other countries’ need to decrease global GHG emissions, will the U.S. decide to cap coal exports? Two, what environmentally friendly commodity will replace coal as Santa’s naughty commodity de siècle (compost perhaps)?

What Santa won’t be bringing to consumers, owners and manufacturers of rail equipment is clarity about the 2022 rail economy. (Unlike many other successful entrepreneurs, Santa has stayed in his lane and refused to expand into economic forecasting—plus hot rolled steel just doesn’t fit under the tree.) With that in mind, it feels right to look forward into 2022. Rapid and extreme reactions to labeling COVID “Omnicron” as a variant of interest demonstrate the global economy’s fragility and the prominence of a pandemic-based reactionary mentality. Clearly, pandemic-synonymous volatility remains present and fears of supply chain disruption are still just one variant away.

2022 is likely to be a mix of tentative behaviors as equipment consumers try to balance concerns about ongoing economic growth vs. the possibility of long-term inflationary pressure and the potential for rising interest rates. Evaluating the price dynamics for raw materials of steel and aluminum and its impact on railcar pricing is paramount for anyone who has been waiting for a window to purchase or lease new railcars.

Pent-up demand is balanced against potential supply chain rationalization and a qualified “return to normalcy” that could lead to a reduction in lease rates as idle car supply increases. However, do not expect a shift by the railroads to pursue a growth strategy in pursuit of railcar loadings even as they stare face-to-face with a gravesite hacked into the ground by the Ghost of Christmas future as played by the STB.

A safe and healthy holiday season and a successful 2022!