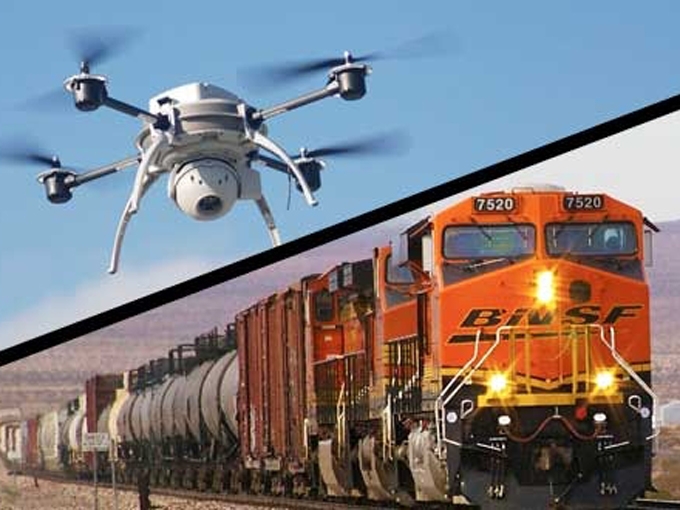 BNSF is one of three companies that will work with the Federal Aviation Administration (FAA) on a Pathfinder research partnership initiative to explore the next steps in unmanned aircraft operations.

In March, BNSF was granted permission by the FAA to begin patrolling its track with small unmanned aircraft systems (UAS). The exemption grants BNSF operation of approved aircraft at speeds not to exceed 50 knots. The UAS can only be used to monitor “BNSF owned or controlled railroad infrastructure and operations” and must remain below 400 feet.

FAA cited safety gains in its authorization allowing BNSF use of UAS, writing, “this…may also help to reduce injuries to employees on the ground by allowing for remote aerial review rather that requiring them to climb over or onto track structures in remote areas.”

The railroad’s recently announced partnership with FAA will “explore the challenges of using these vehicles to inspect [its] rail infrastructure beyond visual line-of-sight in isolated areas.”

FAA Administrator Michael Huerta explains the Pathfinder research partnership in a post on the U.S. Department of Transportation’s “Fast Lane” blog: “Earlier this year, we took an important step forward by releasing a proposed rule that laid out a flexible framework for the routine use of small unmanned aircraft. It included a number of common-sense provisions like not flying near airports, at night, or more than 500 feet off the ground. It also recommended requiring the operator to be able to see the unmanned vehicle at all times—that’s our line-of-sight requirement. We received more than 4,000 public comments on the proposal, and we’re working to address those before finalizing the rule.

“But this takes time, so we’re actively looking for other ways to expand the use of unmanned aircraft in the meantime. We’re receiving valuable information from our six national test sites. And we’re accommodating requests for some commercial operations, with 250 such requests approved.

“Because the U.S. has the busiest, most complex airspace in the world, the job of integrating unmanned aircraft into our airspace is a big one, and we’re determined to get it right. The valuable data we anticipate from the three Pathfinder trials will help us do just that.”

BNSF, CNN and PrecisionHawk make up the trio of companies included in the new partnership with FAA.

For more on how the use of drones could impact railroad labor relations, see Railway Age Contributing Editor Frank Wilner’s story.