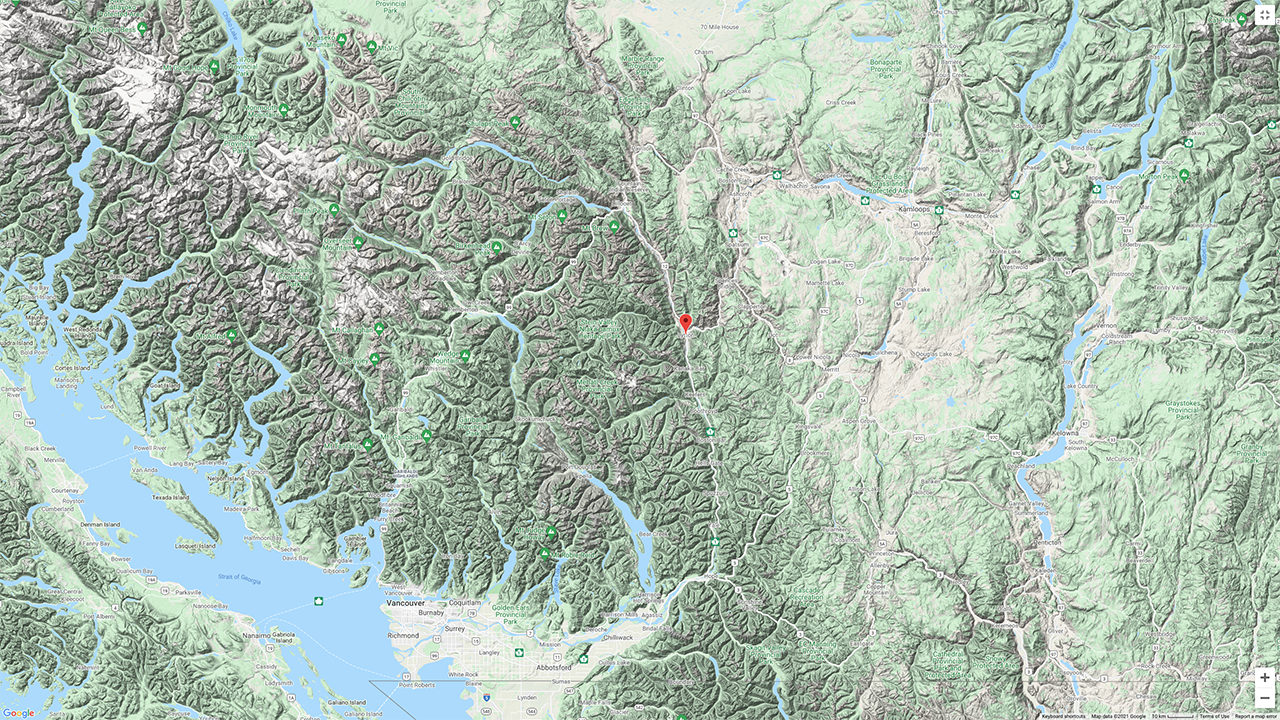 Map showing the location of the Lytton wildfire. Source: TSB

The Transportation Safety Board of Canada (TSB) reports that its investigation following the June 30, 2021 fire that destroyed the town of Lytton, B.C “has not revealed any evidence to link railway operations to the fire. Unless new information establishes that a TSB reportable event occurred, no further work will be performed and no TSB investigation report will be produced.” The wildfire remains under investigation by BCWS (British Columbia Wildfire Service) and the RCMP (Royal Canadian Mounted Police).

TSB Rail Transportation Safety Class 5* Investigation R21V0143 examined potential train activity-related fire in the vicinity of Mile 98.3 on CN’s Ashcroft Subdivision. On June 30, at approximately 4:48 p.m. PDT), a fire was reported near the CN right-of-way in the vicinity of Mile 98.14, just west of Lytton. The fire grew rapidly due to extreme hot and dry conditions combined with high velocity winds, and ultimately destroyed much of the town’s downtown area.

Train C73152-29, a westbound Canadian Pacific loaded, 157-car unit coal train operated by a CN crew under a directional running agreement between CN and CP, was the last train to pass through Lytton prior to the first report of fire. (Loaded trains of both railroads operate westward on the CN Ashcroft Subdivision, and empty trains of both operate eastward on the CP Thompson Subdivision.)

C73152-29 operated through the suspected area of the fire’s origin at about 4:30 p.m., about 18 minutes prior to the reporting of the fire. It was operating at 25 mph with low to moderate throttle to maintain speed, according to TSB. CP 300-29 was the last train to pass through the Lytton area eastbound on the CP Thompson Subdivision prior to the first report of the fire. “There was no occurrence reported to the TSB by either CN or CP, and nor were they aware of any such occurrence when specifically asked by the TSB,” the agency said.

TSB said it “had reasonable grounds to believe that there was a situation or condition that could induce an accident or incident (i.e. a fire caused by rolling stock),” and deployed an investigator on July 9 to gather information, examine and photograph the area, and assess the circumstances “to determine if the rolling stock that passed through Lytton could have caused or sustained a fire.”

TSB confirmed with CN and CP that no rail grinding activities or track work had taken place in the area that day or in the days before the first report of fire. Lead investigator James Carmichael inspected C73152-29 after it had been off-loaded and secured in Burnaby, B.C., “looking for signs of hot bearings, burnt brake heads, built-up tread, and other potential fire-creating causes,” TSB reported. “No anomalies were noted. Transport Canada had also performed a safety inspection of the train earlier at the request of the RCMP and noted no anomalies.” As well, Carmichael met with a BCWS fire origin investigator in Lytton, and conducted interviews with railroad employees engaged in operating trains in the area or in maintenance activities. “No anomalies were observed or reported,” TSB said.

The BCWS expressed interest in samples of a black, carbonaceous coal-like substance, gathered from a location on the west side of the track near Mile 98.14, as a possible source of ignition and conducted a laboratory analysis of the substance. TSB also collected samples of the substance. which were sent to its Engineering Laboratory for material analysis. Comparison samples gathered from a locomotive exhaust stack and a rail grinder vehicle were also collected and sent to the TSB lab for analysis. “The spectral results revealed that the three analyzed samples have little in common,” TSB noted.

TSB requested the lead and mid-train forward-facing videos (FFV) from C73152-29 and FFV from CP 300-29 from both CN and CP, and examined the data from the last two hot box detectors encountered by C73152-29 located at Seddall, Mile 82.8 and Lasha, Mile 96.5. Investigators also downloaded and reviewed data from the C73152-29 locomotive event recorder from the lead locomotive and the tail end remote locomotive. In all cases, “there were no anomalies noted with the operation of the train through Lytton,” TSB said.

In conclusion, TSB said that “a fire is reportable to the TSB as a transportation occurrence if it is known that the operation of railway rolling stock causes or sustains a fire. There has been no report of such an occurrence made to the TSB by either railway that operates through the area. The TSB investigation has not identified any link between railway operations and the fire. Further effort, beyond a Class 5 TSB investigation, is not warranted unless new information establishes that a TSB reportable event (i.e. an accident or incident involving rolling stock) occurred.”

Lead investigator James Carmichael has been with the TSB in the Railway/Pipeline Investigations Branch since 2008 and has been a key investigator in several investigations in Western Canada. Before joining TSB, Carmichael held various mechanical positions with four railroads. At British Columbia Railway (BCR) from 1980 to 2004, he worked as a carman and progressed into a management role as general supervisor in the Car Department. Over the next four years he worked for CN and CP as a mechanical supervisor. He was also regional manager for Mechanical with OmniTRAX’s Carlton Trail, Hudson Bay, and Okanagan Valley Railroads. Carmichael holds certifications as a hazardous materials technician and tank car specialist and was a member of BCR’s Emergency Response Team.

*TSB notes that Class 5 investigations “are limited to collecting data, which are then stored in a modal database. If TSB investigators deployed to the occurrence site, a short description of the occurrence is posted to the TSB website once the investigation has been completed. These investigations are generally completed within 90 days. There are 3 phases to a TSB investigation. In the Field Phase, a team of investigators examines the occurrence site and wreckage, interviews witnesses and collects pertinent information. In the Examination and Analysis Phase, the TSB reviews pertinent records, tests components of the wreckage in the lab, determines the sequence of events and identifies safety deficiencies. When safety deficiencies are suspected or confirmed, the TSB advises the appropriate authority without waiting until publication of the final report. In the Report Phase, a confidential draft report is approved and sent to persons and corporations directly concerned by the report. They have the opportunity to dispute or correct information they believe to be incorrect. The Board considers all representations before approving the final report, which is subsequently released to the public.”