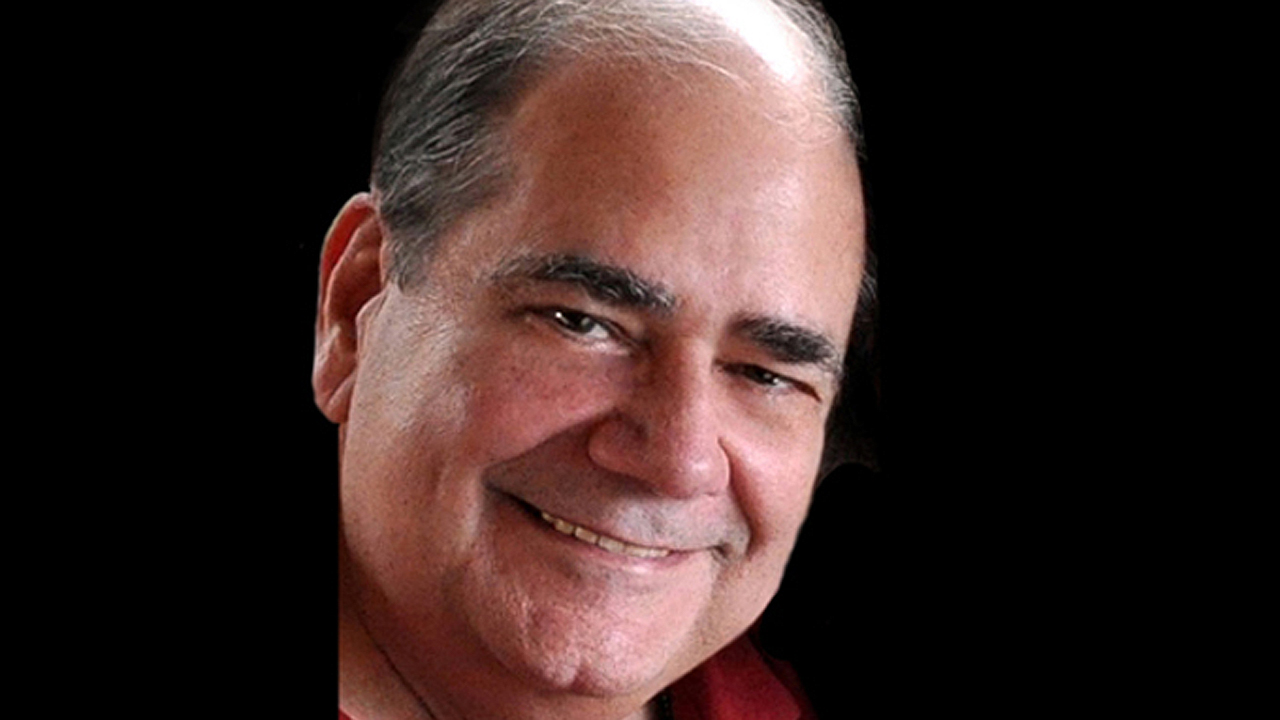 What I’m going to suggest will probably have the risk assessment people doubling over in laughter, but since I’m merely a retired locomotive engineer—not an attorney or a bean counter—my perspective is totally different. It’s void of possible legal implications and liability concerns that cause simple, straight forth suggestions from well-intentioned front line employees, to be summarily dismissed by management. Before you toss this in the mental wastebasket, please hear me out.

Following a double-fatality trespasser strike May 9 near Richmond, the news outlets and social media were awash in their ritualistic gasps of astonishment as to how two individuals could possibly have found they way into the path of a 79 MPH Amtrak train and been killed. Police and nearby residents noted that teenagers frequent the right-of-way, either as a shortcut to get from one neighborhood to another, or simply walk the tracks, earbuds connecting them with their source of entertainment, while disconnecting them from the reality of the peril lurking from behind—or in many cases, coming right at them.

It’s the same story told time and time again. It would be quite simple to fabricate a template with blanks for the location, speed and other incidentals to be inserted, neatly tied up with the standard closing, “Authorities are investigating how this could have happened.” How indeed. 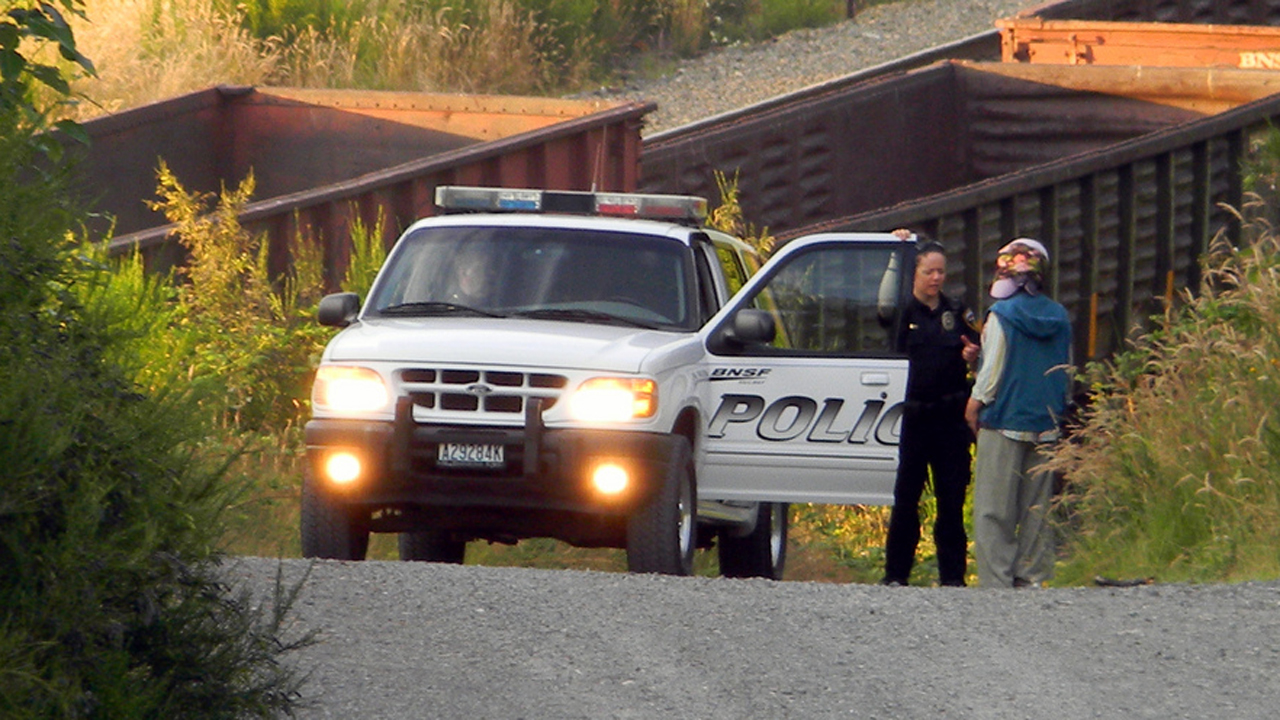 Having been involved in a half-dozen fatalities during my 35-year career, and painfully listening to my prematurely aging 33-year-old locomotive engineer son recount the three trespasser strikes he’s endured in his comparably short 15 years with Amtrak, it’s hard to respond to well-intentioned folks, expressing their sympathy with families of those who lose their life, by asking them to have the same degree of empathy and compassion for the train’s engineer and crew. No one seems to realize that we are the ones who witness the last precious seconds of human lives, who scream helplessly in our locomotive cab, shouting curses heard by no one other than ourselves, simultaneously petitioning the Almighty with plaintive prayers to intercede through divine intervention to prevent the inevitable, while at the same time begging him to keep all wheels on the rails, the train in one piece, and our passengers and crew safe from injury. It’s something you never want to experience if you can avoid it.

It is said that when you die, your entire life flashes before your eyes. When your train takes the life of a trespasser, THEIR life plays out on your consciousness for the rest of YOURS. A continuous loop, repeating itself over and over again, in the middle of the day, the middle of the night. You torture yourself sometimes, wondering if there wasn’t something you could have done. Had you not been running as fast, you might not have intersected with the trespasser. He or she would just have been another blur on the periphery. If. If only.

Why must people be on the tracks anyway? What’s the fascination? And what’s with the latest fad of having celebratory images of yourself, your friends or your loved ones, in the middle of a set of steel rails? I was once told that it’s the mental image formed as the tracks grow closer and caress each other approaching the horizon. It’s the symbolic hope that life will imitate them—even with its ups, downs and curves, it will likewise be endless and terminate in a glorious sunset. 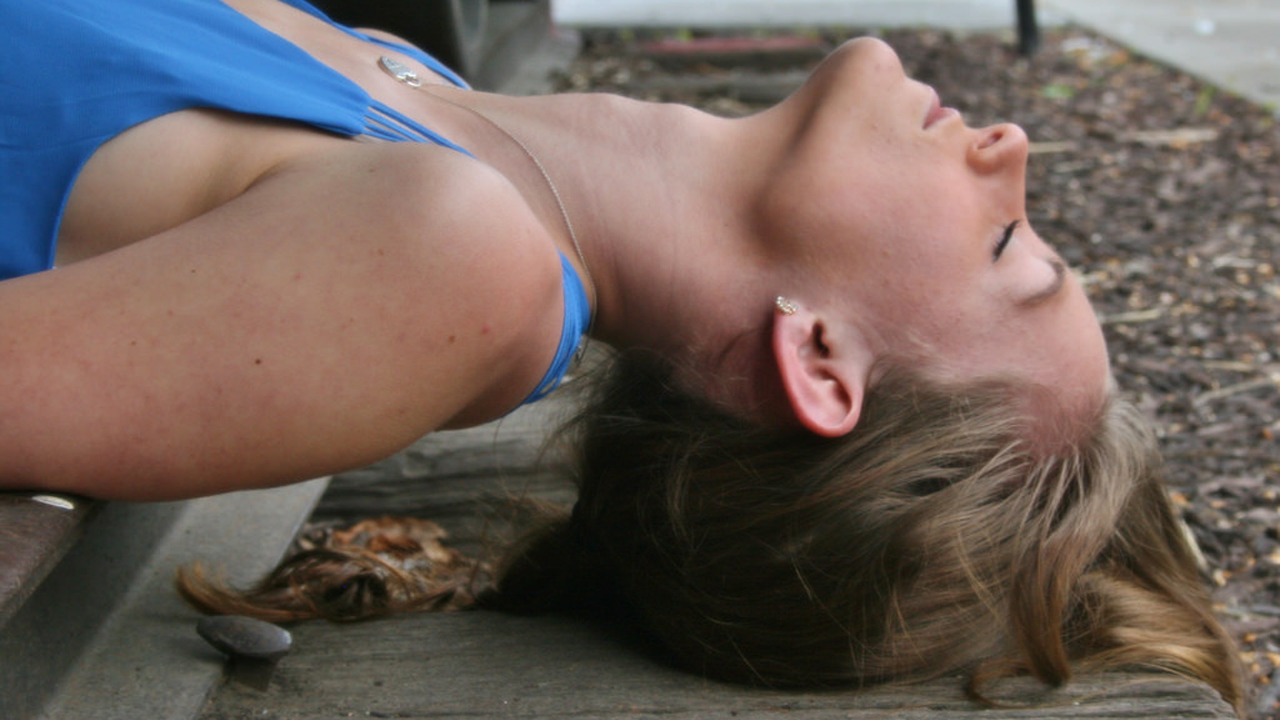 What is she thinking? Not much, if her head is sliced off.

As a former Amtrak company photographer, relentless in my pursuit of safety while being tireless in search of just the right shot, when I come upon someone with a camera, about to photograph a trespasser in a commemorative pose, I never fail to stop and warn them of the danger they face—even citing Code of Virginia § 18.2-159, “Thou shall not trespass on railroad track under penalty of a fine and incarceration.” Most often, after the offender asks if I’m a railroad official or law enforcement officer, they thank me and vacate the right-of-way. Every now and then though, they remind me that it’s none of my business. Safety is everyone’s business, I always counter. I’m a railroader. It’s in my consciousness 24/7, even though I’m retired.

I was doing this one day at Ashland, Va., my home, where Amtrak and CSX trains roar through the center of town at 35-45 MPH, only yards from homes and businesses, rattling glass windows, when an especially stubborn professional photographer was kneeling on the crossties to get a shot of a parent with her young son. When the photographer stood up, there were stains on her slacks, which resulted in an obscenity she unsuccessfully attempted to muffle. 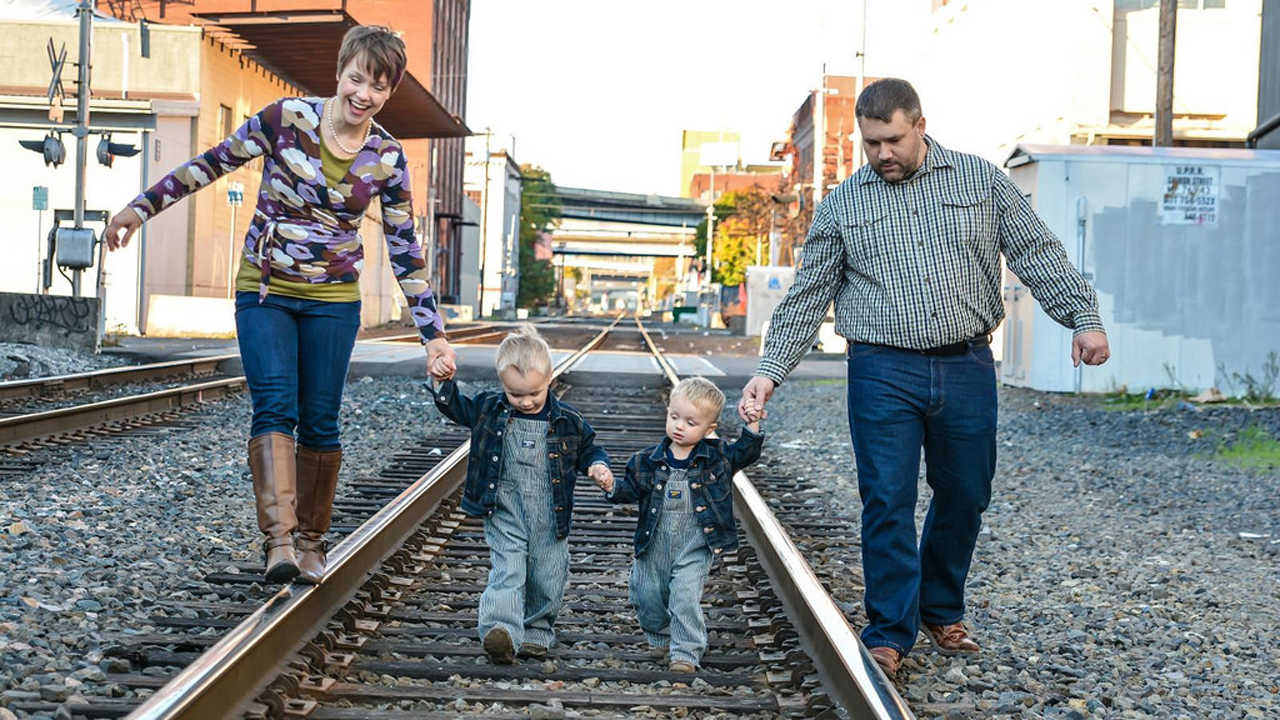 How do we prevent photographers from shooting stuff like this?

“You realize those wooded cross ties are treated with creosote, a carcinogen so powerful that without gloves, they’ll take the skin right off your hands,” I said, as the photographer’s eyes became saucer-like and the client quickly grabbed her young son by the arm and removed him from the gauge of the rails, then inspected the bottoms of his shoes. “But then, it might just be some of the hazardous chemicals, gear box lubricant, human waste or other things trains carry every day that inadvertently leaks down onto the right-of-way. When you get into your car, or before you enter your house, consider that you’re bringing a little bit of the railroad home with you.”

Seeing the apprehension on her face, it suddenly dawned upon me that for all of our efforts to alert the public to danger posed by moving trains, we’re failing to attack the prime enticement itself: the peaceful solemnity portrayed in songs and visualized on the screen of the tracks—the poor man’s “yellow brick road.” A pristine setting where romance blossoms and young barefoot boys meander on their way to the fishing hole.

We’ve come to accept the reality that, like so many other dangers (texting, driving under the influence, smoking and such), people discount the inherent risk of being struck by a train. It happens to other people. They’ve neither personally witnessed a trespasser, nor know someone who has been struck by a train. You can argue with some people until you’re blue in the face, and they’ll still walk right down the middle of a set of main line tracks, convinced that they’ll hear or see a train in ample time to get out of harm’s way.

With all due respect to Operation Lifesaver, let’s dash some dreams. Show the public that while all ends well at the conclusion of a 60-minute television drama or an epic film, life can have, and often does have, tragic consequences. In those Hollywood scenes where two breathless lovers race across an open pasture in slow motion, to embrace each other, they’re apparently willing to risk being gored by a rampaging bull, but you wonder if they’d be so carefree if they considered for a moment that the ground is likely covered in a layer of cow pies. Film makers employ stuntmen because they’re savvy enough to calculate the risk involved in creating those breathtaking scenes.

Movies are make believe—life is for real. Actors live to die another day. The rest of us get only one chance. 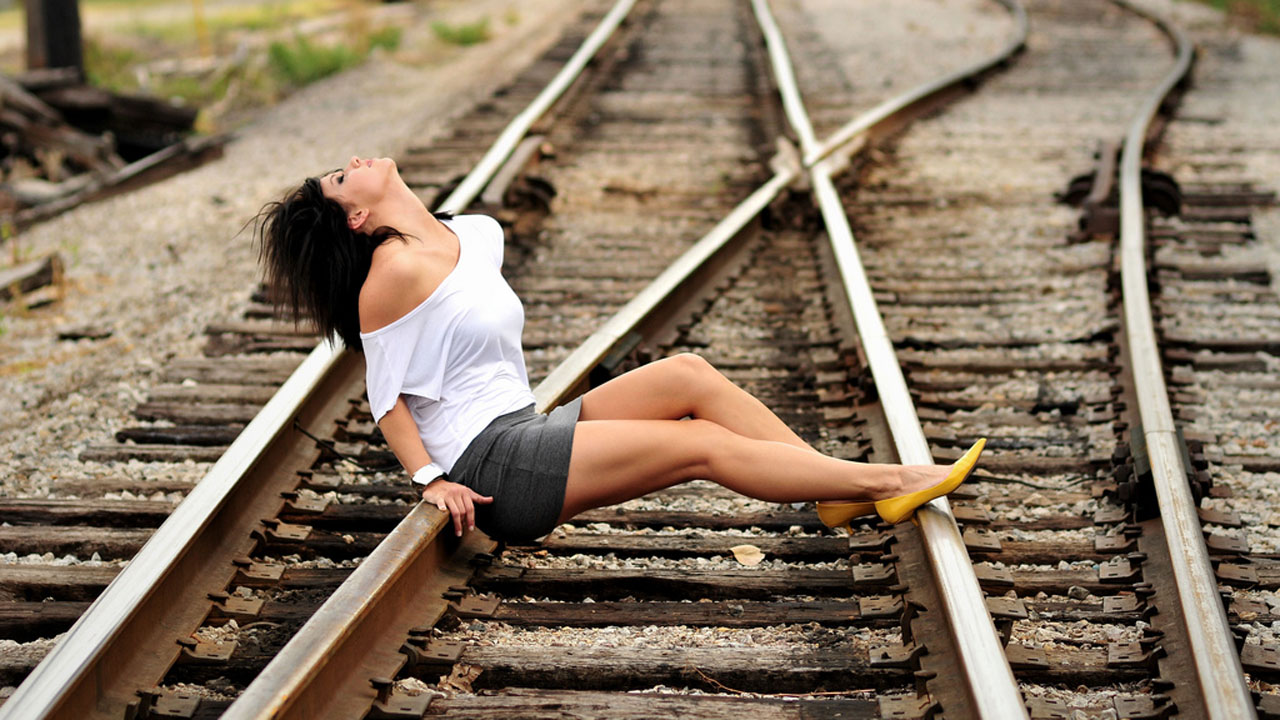 Pretty picture? Not if she’s crushed by a train.