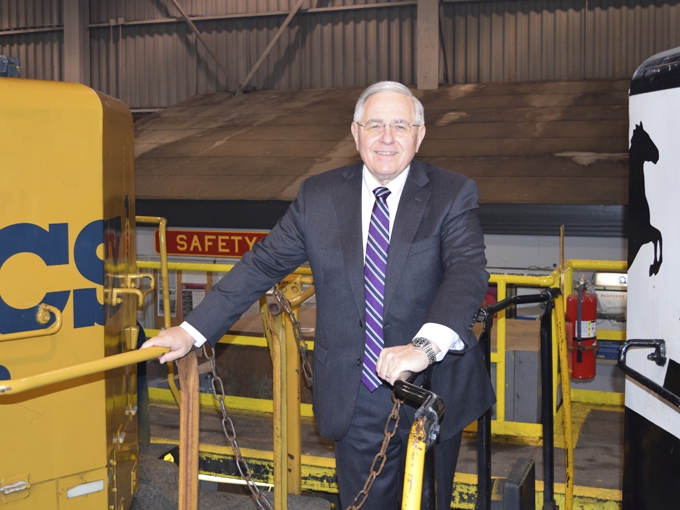 In an 87-9 vote, the Senate invoked cloture and ended floor debate on Derek Kan’s nomination as Undersecretary of Transportation for Policy. The Senate is expected to confirm Kan on Nov. 13.

Kan, a former Lyft General Manager, Presidential Management Fellow at the Office of Management and Budget and Amtrak board member, also previously served as a policy adviser to Senate Majority Leader Mitch McConnell (R-Ky.)—who happens to be married to Transportation Secretary Elaine Chao. Kan was nominated in April, along with veteran railroader Ron Batory as FRA Administrator, but both nominations have been stalled by Senate Minority Leader Charles Schumer (D-N.Y.), Cory Booker (D-N.J.) and Kirsten Gillibrand (D-N.Y.). The trio (New Jersey’s Senior Senator, Democrat Robert Menendez, is in the middle of a criminal corruption trial and has been silent on the matter) has been loudly vocalizing that they want assurances from the Administration that it will deliver its share of the Gateway Program.

Speaking about Kan’s nomination, Senate Commerce, Science and Transportation Committee Chairman John Thune (R-S.D.) said, “This non-controversial, well-qualified nominee has been languishing in the Senate for far too long. It’s truly unfortunate that we have to go through the cloture process on this particular nominee, who is well-known to many of us here due to his previous work as a staffer in the Senate. No project should get to cut the line based on the machinations of a handful of our Democrat colleagues.”

The Gateway Program has been a priority for transportation agencies that operate intercity and regional/commuter rail service on the Northeast Corridor (Amtrak, NJ Transit, New York MTA), as well as for the Port Authority of New York and New Jersey, which is contributing a substantial share of funding. Gateway consists of constructing two new Hudson River tunnels (doubling the number of tubes under the river), replacing the existing Portal Bridge on the New York-New Jersey “High Line,” and adding platform and station capacity at Penn Station New York by reconfiguring the James A. Farley Post Office Building into Moynihan Station, an extension of the existing facility. The Pennsylvania Railroad built the existing facilities in 1910 as the major portion of its New York Improvements Project, at the time one of the largest civil engineering projects ever undertaken.

The existing tunnels require a major overhaul involving closing down one tube at a time, but doing so without having Gateway’s new tunnels in service would reduce system capacity by up to 75%. This would create traffic jams far worse than those that occur today, and seriously damage the New York-New Jersey Metropolitan Area economy, project advocates say.

New York Governor Andrew Cuomo, outgoing New Jersey Governor Chris Christie, Amtrak, the Port Authority and the Obama Administration, with support from the New York and New Jersey Senate delegations, committed to funding Gateway, but the Trump Administration’s commitment is uncertain, despite the President’s assertions about pouring roughly $1 trillion into U.S. roads, bridges and railroads through a promised infrastructure bill. The USDOT has withdrawn from Gateway’s board of trustees, and the Administration has proposed limiting funding for a grant program in such a way that would exclude Gateway. Curiously, DOT Secretary Chao’s husband, Senate Majority Leader McConnell, has in the past called Trump’s promised infrastructure bill a “non-starter.”

While Kan’s appointment is now a matter of a simple vote on the Senate floor (and Sens. Schumer, Booker and Gillibrand voted against cloture), Batory’s appointment remains stalled. Critics say that Schumer and company’s political machinations holding up confirmation of the nation’s number one railroad safety official are compromising overall railroad safety, as the FRA is essentially operating without experienced leadership. They note that when a passenger train incident occurs involving fatalities and injuries—and in recent years, several have taken place—Schumer and his Senate colleagues from New York, New Jersey and Connecticut are the first to convene press conferences demanding that something be done.

“In his floor speech, Sen. Thune specifically mentioned Federal Railroad Administration nominee Ron Batory as one of those ‘well qualified’ and whose nomination should not be on held hostage in exchange for federal funding of the Gateway Program,” observes Railway Age Capitol Hill Contributing Editor Frank N. Wilner. “Senate sources say Majority Leader McConnell may similarly seek to invoke cloture and end the hold on Batory’s nomination prior to the Thanksgiving recess so that Batory’s nomination moves to the Senate floor for a vote.

“The kerfuffle over the Gateway Program funding is largely based on fiction created by Senators Schumer, Booker and Gillibrand. They allege that former Transportation Secretary Anthony Foxx assured the federal funding on behalf of the Obama Administration, and that current Transportation Secretary Chao has reneged. In fact, there is no legislation allocating the funds, nor has a written agreement allocating the funds been produced.

“There has been some limited funding by Congress, but nothing near the $15 billion federal share the region is seeking. For example, Congress allocated $235 million for the Hudson Yards concrete casing (part of Hurricane Sandy recovery funding), and some $100 million for environmental and engineering work toward Gateway—but zero money for new Hudson River tunnels or for the full Portal Bridge replacement project.

“There is just the undocumented allegation of these three senators, who have been engaging in what appears nothing less than attempted extortion. Confirming Batory and Kan—both of whom possess exceptional knowledge of why the Gateway Program is essential to Northeast Corridor commuter and intercity rail operations—and engaging in bipartisan efforts to justify the federal funding seems a more productive strategy.”