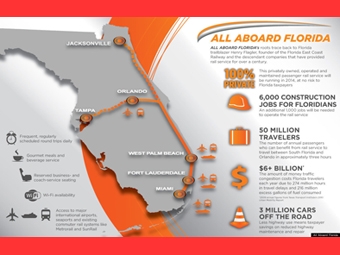 The DEIS is a milestone in the clearance process for all known environmental impacts before pre-engineering, design, and construction can begin on the Project. Publication of the DEIS begins a comprehensive 75-day public comment period that is nearly twice as long as the time period required under the National Environmental Policy Act (NEPA) of 1969. The DEIS examines four alternatives for the 168.5-mile proposed alignment between West Palm Beach and Orlando, includes environmental analysis for both Phase I and Phase II, and lays out potential impacts from the project on cultural resources, navigation, wetlands, floodplains, biological resources, and natural ecological systems, as well as land use.

“Although the overall environmental impact of the project will be minimal, with some beneficial impacts anticipated in air quality, transportation efficiency and noise, the document identifies a dozen adverse impacts across four alternatives,” FRA said. “The DEIS proposes 19 distinct mitigation strategies for the adverse impacts identified.”

FRA issued a Finding of No Significant Impact (FONSI) in January 2013 for Phase I of AAF’s project, which would provide rail service on the 66.5 miles between West Palm Beach and Miami. Although the DEIS was initiated for Phase II of the Project (West Palm Beach to Orlando), the document analyzes the cumulative effects of both phases of the project since train operations will cover the full corridor between Miami and Orlando.

AAF proposes to construct and operate a privately owned and operated 235-mile intercity passenger railroad system that would connect Orlando with Miami, with intermediate stops in Fort Lauderdale and West Palm Beach. The project would be implemented in phases and includes adding double track to existing rail right-of-way between Cocoa and Miami and building a new rail right-of way between Cocoa and Orlando. The project would include 32 passenger trains daily and travel between 79 mph and 125 mph.

“FRA invites the public, governmental agencies, and all other interested parties to provide written comments on the DEIS,” the agency said. “Public information meetings on the DEIS will be held throughout the comment period. Complete information on the comment process, public open houses, and the full DEIS can be found on either the FRA or AAF websites, www.allaboardflorida.com or www.fra.dot.gov. The FRA is publishing this document in coordination with the Federal Aviation Authority, U.S. Army Corps of Engineers, and the U.S. Coast Guard. Public notice will be made through a notice in the Federal Register, newspaper ads, and press releases.”