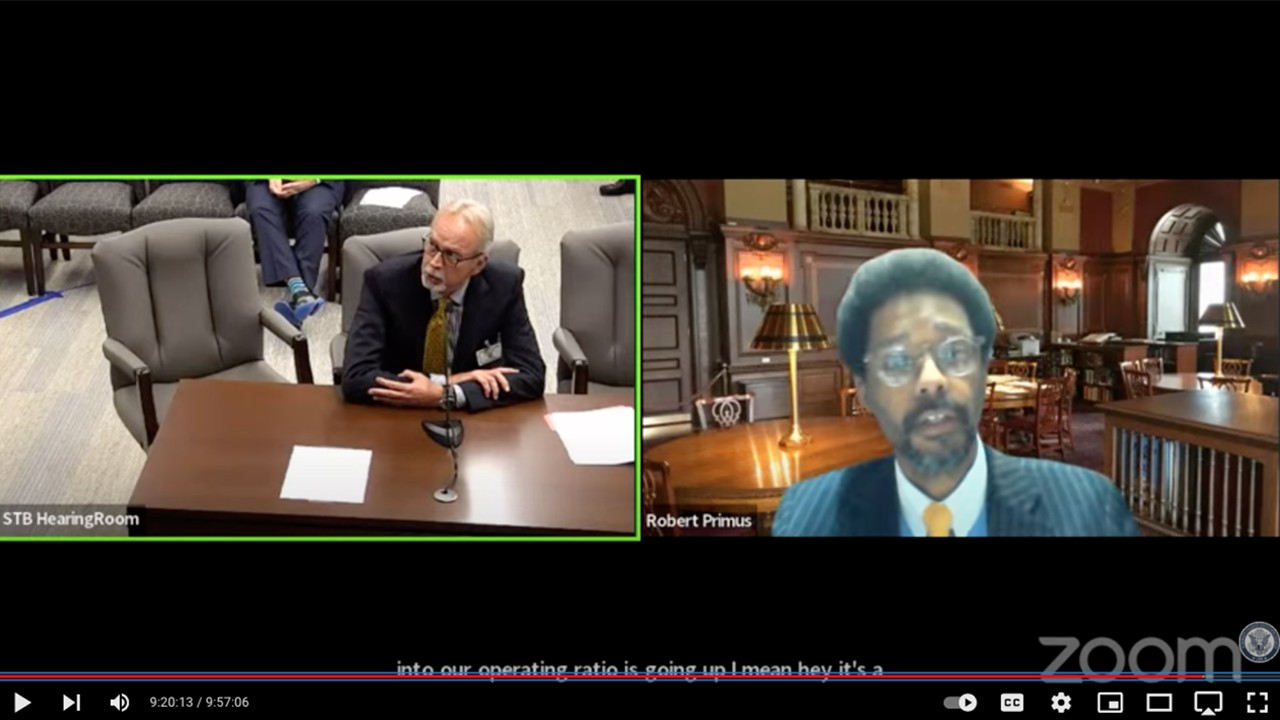 Whatever was CSX CEO James M. Foote thinking when he testified before the STB’s “Urgent Issues in Freight Rail Service” hearing April 26? His display of disdain for the agency—in particular, White House-nominated and Senate-confirmed STB member Robert A. Primus—was evident in mannerisms and sarcastic responses.

For the usually well-respected, third generation railroader whose track record is one of investor-satisfying performance, Foote’s April 26 appearance is best not bookmarked. Kudos to Primus and STB Chairperson Martin J. Oberman for remaining composed through Foote’s loss of situational awareness. Indeed, the acolyte of legendary railroad CEO E. Hunter Harrison could have fared worse.

How much worse? Clyde B. Aitchison, who served on STB predecessor Interstate Commerce Commission for 35 years (1917-1952), was known to swivel in his chair and turn his back on disrespectful witnesses. Sen. Daniel Patrick Moynihan, when chairing the Senate Finance Committee, admonished a truculent witness “never” to return factually unprepared. And John Dingell, when chair of the House Commerce Committee when its portfolio was railroad oversight, was known to use investigative staff to disturb the sleep of out-of-favor witnesses.

So, what went on during that ninth hour of the hearing’s first day causing Foote’s foot-in mouth malady? All began following Primus’ welcome, informing Foote, “It is important that you are here [because] the buck stops with you … you’re the one who pulls the lever.”

Questioned by Primus about the rail industry’s treating as the Holy Grail an ever-lower operating ratio (operating expenses divided by operating revenue), Foote insisted, “We don’t operate from an operating ratio.” In fact, Foote was quoted in the June 6, 2019, Jacksonville Daily Record that operating ratio “tells you by looking at one number whether or not you are running the company effectively and efficiently. It is what I call a scorecard.”

Foote seemed disconnected from the parade of shipper and rail labor witnesses before him who provided specific examples of railroad service failures. Although admitting, “We have struggled, we have underperformed,” Foote flashed untimely hubris by adding, “I’d like once in a while somebody to say, ‘You know, you guys did a great job.’”

Although shipper after shipper complained of first-mile/last-mile service failures—the railroads’ inability to spot and pull cars at shipper facilities when ordered, and too often bunching them when spots are made—Foote spoke of road-train velocity and network fluidity.

Challenged that the rail industry’s train crew shortage is caused, in part, by harsh working conditions and management abuse of workers, Foote used an ill-advised phrase, “Every employee has worked like a dog to do the best job under circumstances to meet the needs of our customers.”

Although Foote said CSX would be back to “record setting” levels in as few as “three or four months,” other rail witnesses spoke of the difficulty in finding qualified applicants for train and engine positions, saying it takes fully six to nine months to train a conductor. Foote termed Primus’ questioning of him on hiring and staffing as “unrealistic.”

Ignoring that the STB has no authority to override existing labor agreements requiring two-person crews, Foote—following Primus’ probing him on service failures—cavalierly responded, “You want an answer? Let us run the trains with one employee.”

The exchange between Foote and Primus became more heated when Primus compared rail service capabilities to military readiness—“To take care not to cut … to the bone” and be ready to meet unforeseen contingencies. His arms crossed and impatience evident, Foote said, “Come on, we have to go through the same over and over and over questions? You don’t want the answer.” Notably, on Aug. 24, 2020, each Class I railroad was sent a letter jointly signed by the STB chairperson and Federal Railroad Administrator stressing “the importance of crew availability, safety, equipment resources and communication between rail carriers and shippers as the nation works to restore jobs and promote economic recovery.”

Appearing fully exasperated that he had to sit for questioning by a rail regulator, Foote told Primus, “I came here out of courtesy. I wasn’t invited. Look at your letter. You should know. You’re on the Board.” Chairman Oberman, appearing hardly pleased at the Foote performance, took a moment to correct Foote, reminding him, “The letter said senior executives. Railroads should figure out which senior executives to bring.” Of note, Foote was the lone CEO to appear.

This was not CSX’s finest hour and certainly not reminiscent of the polish typically displayed in public by former CSX and CSX-predecessor chief executives such as John W. Snow, Hays T. Watkins Jr. (“Just call me Hays”), Prime F. Osborn III and W. Thomas Rice.

That said, the palpable animosity on the part of Foote may be a spillover from a contentious April 5 STB hearing on Amtrak’s application to restore passenger rail service to the Gulf Coast, which would operate over certain CSX and Norfolk Southern (NS) lines.

Within 24 hours of that hearing, CSX and NS legal counsel filed with the Board a 10-page objection as to the “tenor and form” of the Board’s cross examination of a railroad witness.

CSX and NS alleged the STB’s line of questioning at the Amtrak hearing “crossed the line from clarification into advocacy on a number of occasions”—that the Board acted more as an “advocate or witness” than a judge, causing “the fairness of the proceeding” to be “compromised.”

Comparing the STB to a trial court, CSX and NS legal counsel wrote that questioning of witnesses by Board members “must be conducted so as to preserve both the reality and appearance of impartiality,” and that both “are risked where judges engage in sustained cross-examination, including leading questions calculated to discredit or impeach or that indicate prejudgment of the issues.”

Whether those objections merited Foote’s subsequent display of disdain toward a federal independent regulatory agency holding congressionally granted quasi-legislative and quasi-judicial powers—an agency, moreover, that not insignificantly had recently approved a CSX application to acquire Pan Am Railways—is a thorny question.

That letter of complaint, reinforcing the CSX and NS opposition to Amtrak’s application, raises another thorny issue, considering one of the strongest advocates of Amtrak’s application is Sen. Roger Wicker (R-Miss.), who may chair the all-important (to railroads) Commerce Committee in 2023 should Republicans regain a Senate majority following November congressional mid-term elections.

At a Feb. 15 STB hearing on Amtrak’s application, Wicker personally testified that “for the Mississippians who lost a transportation option along with so much else to Hurricane Katrina, this case is not an abstract policy question. It’s about continuing and completing the recovery. I’m confident that the Gulf Coast Rail Corridor can accommodate passenger rail service [that] ran before Hurricane Katrina. I appreciate that the existing rail infrastructure may impose certain limitations, but I want to emphasize that this endeavor is not a zero-sum game.”

If Foote’s grumble has more to do with an activist STB, his problem rests with Congress, not the regulatory agency following its governing statute. Foote especially mis-stepped in suggesting harshly to Primus that the STB’s probe of rail service failures harkens back to an era of regulatory micromanagement.

Quite the contrary, the railroad industry of 2022 has no meaningful resemblance to its circumstances prior to partial economic deregulation by Congress in 1980. That bygone era was one of more than 30 major railroads competing against each other, where as today’s industry is one of regional duopolies displaying dizzyingly low operating ratios, with railroads awash in profits, stock buybacks and the granting of substantial cash dividends.

Reality is that as far back as 17th century English common law, and extending forward to Article I, Section 8 of the U.S. Constitution, congressional edicts and favorable Supreme Court interpretations of legislative and regulatory pronouncements, it is well established that when private property is affected with a public interest, those holding themselves out to the public must do so on reasonable terms subject to regulatory oversight.

Despite a years’ long procession of Association of American Railroads recruited irregulars writing quizzically anti-competition opinion columns, the STB’s statutory role is as a guardian of the public interest—a task Primus was performing in his questioning of the petulant Mr. Foote.

Railway Age Capitol Hill editor Frank N. Wilner is a former assistant vice president for policy at the Association of American Railroads, a former White House appointed chief of staff at the STB and a former president of the STB’s bar association. He began his railroad career with the former New York Central Railroad. He is author of seven books on railroad economics, history and labor relations.