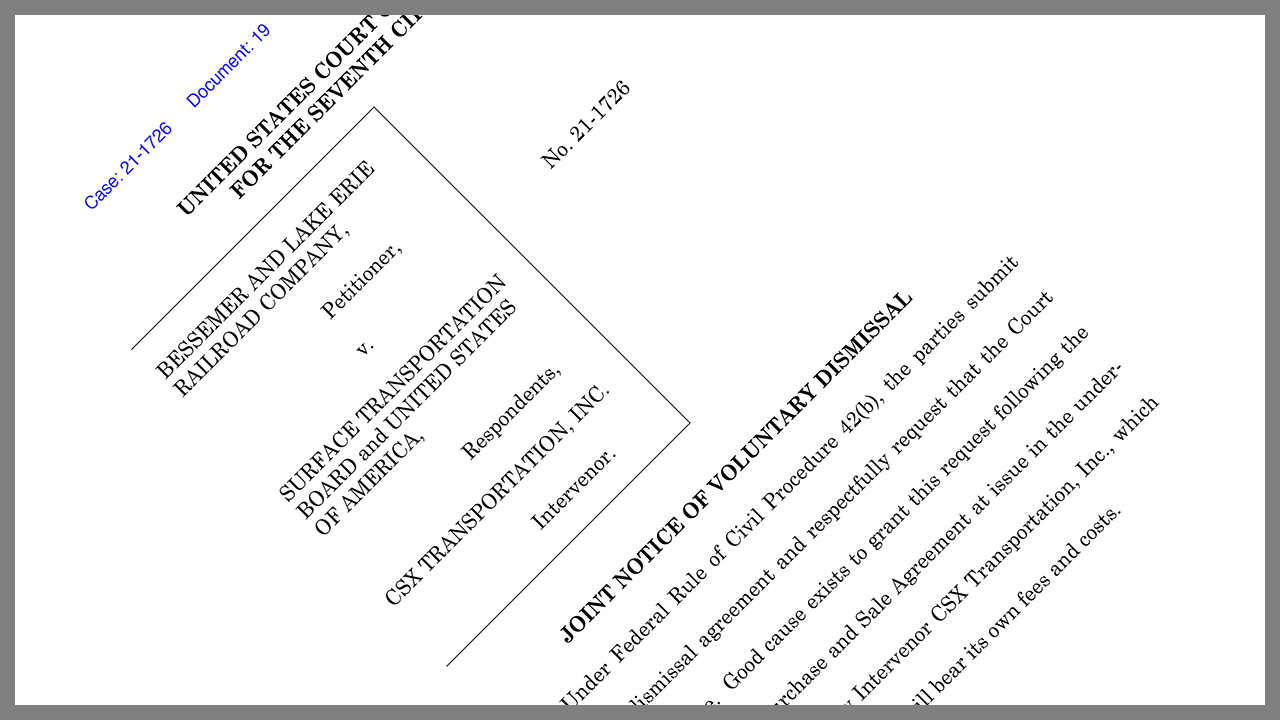 CSX and CN have mutually terminated their transaction in which CN would purchase CSX’s Montreal-Syracuse, N.Y., Massena Line and fold it into its Bessemer Subdivision, the former Bessemer & Lake Erie, which CN acquired in 2004 as part of its larger purchase of holding company Great Lakes Transportation.

In April 2020, the Surface Transportation Board approved the transaction, which CN conducted through its B&LE subsidiary, but ordered CSX and CN to eliminate a provision in the agreement that would permanently prevent CN from negotiating direct interchange with the Finger Lakes Railway and the New York, Susquehanna & Western in the Syracuse region. STB had twice extended the deadline for CN and CSX to submit a revised acquisition agreement. The railroads told the Board they were unable to reach a revised agreement and asked the agency to reconsider the original deal.

CN sued STB in April 2021 appealing STB’s decision when the agency refused to reconsider. Now, more than one year later, the parties have mutually terminated the transaction, and filed a joint dismissal agreement of the lawsuit with the United States Court of Appeals for the Seventh Circuit. The Court granted the motion and dismissed the case.

“Notably, Republican STB member Patrick J. Fuchs, in a dissent to the majority’s initial decision approving the transaction with a condition—a dissent that proved prescient—said that the Board ‘does not seem to consider fully the possibility that the condition might substantially delay or even end the transaction and destroy the benefits that come with it,’” comments Railway Age Capitol Hill Contributing Editor Frank N. Wilner. “And in a second dissent where the Board was asked to reconsider its decision, Fuchs said, ‘The majority’s erroneous attempt to perfect the transaction has delayed and jeopardized meaningful network improvements and may well discourage similar improvements in the future.’”

sees this as an overreach by CN.I’d try to convince both Commissioner Fuchs and CSX otherwise. Why?

“Overlooked is the fact that the railroad industry (all carriers) need to compete with truckers. They all know that—but tend to lose sight of that objective during these ‘property exchanges.’

To do that, the surviving railroad (here, CN) could work with the ‘just a bit out of reach’ local short line railroad. Does CSX actually lose? Not necessarily, when you look closer at the possible future freight car movements.

“First, I’d point out that each carload of short line to/from CN would likely include a track-use wear and tear charge plus a reasonable margin markup that CSX pockets. Crossing another rail company’s track isn’t free. There is a usage charge that CN would pay. In some cases, it might actually become a switcher locomotive and crew/fuel fee.

“Second, with that expedited service, all three railroads potentially gain incremental revenue that otherwise is likely 1) moved by truck or 2) sourced instead from somewhere else other than New York State as a competitive commodity movement.

“There should be a balance between the regional economy gains/loss and the financial gain/loss of the three railroads. Who better to adjudge that balance than the STB? Balancing private gain/loss in railroad freight isn’t the role of the Justice Department, or of FRA or DOT. If STB says nothing, then who does?

“On second thought, it might be better for the railroad officers and their Boards to make that commercial bargain, because they are continuing to lose market share to trucks. Here was an opportunity to be more holistic in the market transfer. Now, CSX has to convince shippers that it really wants to be in the Syracuse-Montreal corridor in a significant way. That’s not going to be an easy sell to smart logisticians.

“I started examining that Montreal corridor way back in 1983 when I directed part of Conrail’s initial branch line economics. I do understand these economic vs. financial tradeoffs. Contrary opinions, of course are welcomed. That’s how we learn where the balance lies.”