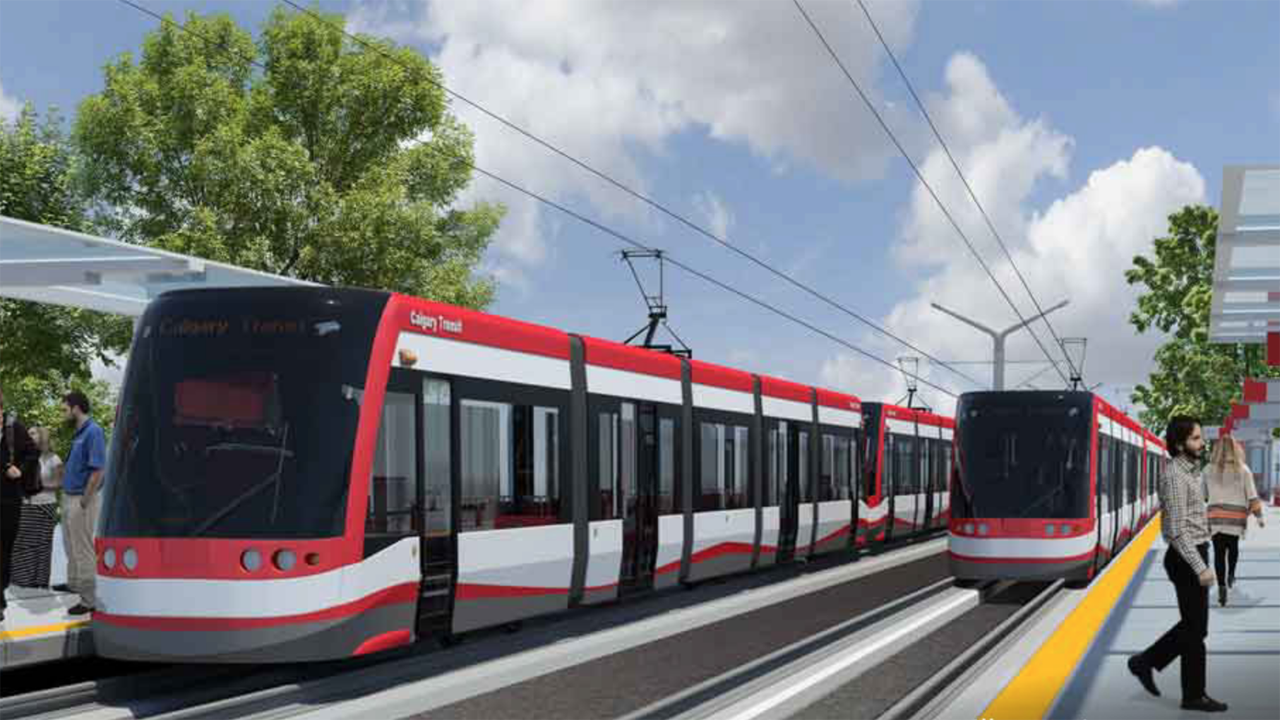 A Request for Qualifications (RFQ) has been released for Phase 1 of the Green Line Light Rail Transit project in Calgary. Also, Denver Regional Transportation District (RTD) has launched a system-wide fare study and equity analysis; and the Vancouver City Council has endorsed the proposed route and station locations for the Millennium Line SkyTrain extension from Arbutus Street to the University of British Columbia.

Stage I of the Green Line project includes two phases. Phase I will connect southeast Calgary to downtown—11.18 miles (18 kilometers) from Shepard to Eau Claire (see map, left)—and link to the existing Red and Blue lines and four MAX BRT (Bus Rapid Transit) routes. It includes 0.93 miles (1.5 kilometers) of tunnel under Beltline and Downtown (6 Street S.E. along 11 Avenue to 2 Street S.W. at the planned Eau Claire Promenade); four LRT bridge structures that span across the Elbow River, Bow River, Deerfoot Trail and Blackfoot Trail; 13 stations; and an LRV maintenance storage facility. It will support future expansion to the north and south. Phase 2 will run 1.2 miles (2 kilometers) from Eau Claire to 16 Avenue North.

“Following extensive consultation with the market and alignment of all funding partners, the Green Line Board has approved a collaborative procurement strategy to build Phase 1 of the Green Line LRT project,” Green Line Board Chair Don Fairbairn said. “The RFQ is a significant step toward delivering this important city-shaping project.”

The procurement strategy for Phase 1 “allows the Green Line Board to select a Development Partner in early 2023 following the Request for Proposal (RFP) stage, from the RFQ short-listed candidates,” the city of Calgary reported. “The Development Partner will work collaboratively with the Green Line team on design progression providing flexibility to innovate, optimize and manage cost, risk and schedule concerns. The Development Phase is expected to take approximately 12 months.” It’s expected that the project will move to the Implementation Phase by second-quarter 2024.

The Green Line project has C$4.9 billion in funding commitments from the government of Canada, government of Alberta and the city of Calgary, according to the city. In November 2021, CAF (Construcciones y Auxiliar de Ferrocarriles) was selected to supply 28 low-floor LRVs.

Denver RTD will examine its fares and consider changes to its fare structure and pass programs in response to feedback from the public and recommendations made by its Accountability Committee. The aim of its study is “to make using bus and rail service more equitable, simple and affordable for the over 3 million people in RTD’s service area,” the agency reported on April 4.

RTD’s previous fare study led to the 2019 introduction of the LiVE program that provides a 40% discount to riders who are income eligible, as well as an increase from 50% to 70% in the discount offered to youth, according to the agency.

RTD is now seeking feedback from current, previous and future riders “to understand what they like about RTD’s fares, what the biggest fare-related challenges are and what opportunities RTD should consider to improve its fares,” the agency said. The RTD Board is slated to consider study recommendations in early 2023.

Details on virtual customer and community meetings and a survey link can be found at rtd-denver.com/farestudy.

In 2014, the Metro Vancouver Mayors’ Council on Regional Transportation identified rapid transit to the University of British Columbia (UBC) as “a regional priority to be delivered in two phases”:

• Phase 1 is the Broadway Subway Project, TransLink’s Millennium Line SkyTrain extension between VCC-Clark Station and Arbutus Street. Currently under construction, it is slated for completion in 2025.

• Phase 2 between Arbutus and UBC was identified, but needed further analysis to determine the transit technology and alignment. In 2019, the Vancouver City Council and the Mayors’ Council endorsed a SkyTrain extension.

The Vancouver City Council in late March 2022 approved the route for the proposed Phase 2 extension to UBC and potential station locations at Macdonald Street, Alma Street, and within the Jericho Lands. The Council also supported advancing opportunities to integrate new stations with future development to improve connectivity, accessibility and passenger amenities.

The Council reported that SkyTrain to UBC will be evaluated later this spring along with other regional projects as part of the upcoming Mayors’ Council Transport 2050 (New Vision), an update to the 2014 Mayors’ Council 10-Year Vision. If the project is prioritized, it will progress to the next phase of design development.

“This decision brings us one step closer to extending SkyTrain all the way to UBC and linking it to the entire region,” Vancouver Mayor Kennedy Stewart said. “Broadway is the second largest economic area in BC, and a rapid connection to UBC will foster new jobs and innovation while combating climate change and reducing congestion by taking up to 3,000 cars off the road per day.”