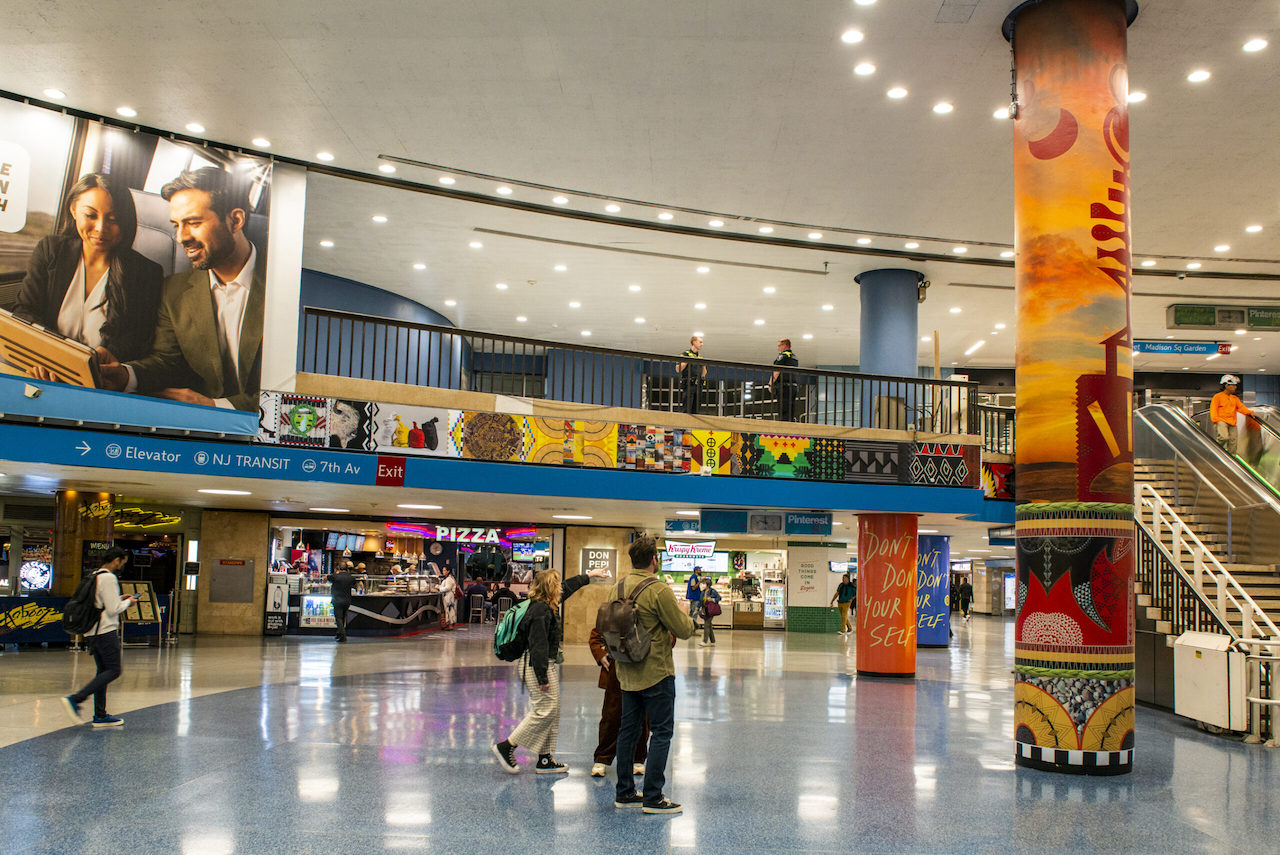 Amtrak unveiled its second series of installations at New York Penn Station for its Art at Amtrak initiative in September. (Amtrak photo)

In September 2022, Amtrak unveiled its second series of installations at New York Penn Station (NYP) for Art at Amtrak, a year-round public art initiative that “brings a variety of visual works to NYP and provides an unparalleled creative platform for New York and New Jersey artists.” Building upon the “highly successful” public art program at Moynihan Train Hall, Amtrak says, the rotating temporary installations commissioned for Art at Amtrak “further enlivens the hub that serves as the front door to New York City.”

Ghost of a Dream (Lauren Was and Adam Eckstrom) installed Aligned by the Sun (Connections), a site-specific new work in their Aligned by the Sun project, for which they asked artists around the world to capture and submit short videos of the sun. Exhibited in the concourse, a location from which one can travel anywhere, Aligned by the Sun (Connections) takes stills from these 223 videos and connects the images via the horizon line to create a continuous landscape that surrounds the Amtrak departure hall and places viewers metaphorically in the center of the planet. Multidisciplinary artist and educator Dennis RedMoon Darkeem created Patchwork Travelers, which draws colors, patterns and icons, such as totems, earth mounds, and the medicine wheel from his dual heritage as ​​an Indigenous and African American into an expansive, visually rich work.

“Art at Amtrak continues to advance our commitment to ensuring all travelers have a modern, inspiring, safe and accessible experience to the cultural capital of the world,” said Amtrak Director, Planning and Development, NYP Sharon Tepper. “In its first few months, this initiative has made Penn Station a site for contemporary art that engages visitors from around the world, and we look forward to seeing the station retransformed.”

Throughout the last five years, Amtrak says it has made more than $300 million in capital improvement investments at NYP, in addition to its investment in Moynihan Train Hall, including a new ticketed waiting area for Amtrak and NJ Transit passengers; new wayfinding and signage throughout the facility; improved accessibility, including renovations of elevators and escalators; and major rail state-of-good-repair improvements to enhance the reliability of service.

MARTA announced on Oct. 3 that the Greater Atlanta Transit-Oriented Affordable Housing Preservation Fund has provided financing for Ulysses Development Group (UDG) and Sunrise Affordable Housing (SAH) to acquire Orchard Walk Apartments, for the preservation of a 204-unit affordable housing project located on Flat Shoals Parkway just south of the planned transit hub near the Gallery at South DeKalb Mall and MARTA bus route 114. The loan to an affiliate of UDG and SAH is $24 million.

The property, Orchard Walk Apartments, is located at 3800 Flat Shoals Parkway in the City of Decatur and near the intersection of Flat Shoals Parkway and I-285. According to MARTA, through the low-income housing tax credit (LIHTC) regulatory agreement, 163 of the project units are subject to income restrictions at 60% area median income (AMI). UDG, along with SAH, both “leading, mission-driven” affordable housing developers, “intend to maintain the long-term affordability at the property and evaluate a tax credit syndication to facilitate further rehabilitation of the property,” MARTA says.

“We are thrilled to see the benefits of this program preserving affordable units in South DeKalb along our transit service and near our planned South DeKalb Transit Hub,” said MARTA Interim General Manager and CEO Collie Greenwood. “This transaction demonstrates how complementary this effort is to our ground up TOD development program. We thank our partners at Morgan Stanley and the National Equity Fund for supporting the affordable housing goals of our jurisdictional partners and of MARTA.”

“Our partnership with Morgan Stanley continues to bring our shared mission and values to life by delivering innovative, collaborative financial solutions to expand the creation and preservation of affordable housing,” said National Equity Fund President and CEO Matt Reilein. “Now, the residents of the 204 housing units in Orchard Walk can keep their affordable housing for the long-term, ensuring a safe and stable future.”

According to the agency, Morgan Stanley Community Development Finance committed $100 million through NEF to assist regional partners in preserving transit-oriented, affordable, multi-family housing at risk of the following: market-rate conversion or financial/physical distress; expiring Federal LIHTC and U.S. Housing and Urban Development (HUD)-funded affordable housing, including properties at, or near, the end of the LIHTC compliance period; or properties with or without rental subsidies.

Over the past 12 months, MARTA says it has preserved or built 913 homes, 519 of which are affordable units. The Fund is now 48% invested, with a remaining $52 million available.

U.S. Transportation Secretary Pete Buttigieg announced on Oct. 4 that the USDOT’s Build America Bureau “will offer low-cost and flexible financing for transit and TOD projects at the maximum level authorized under law” as part of a new initiative under the Department’s Transportation Infrastructure Finance and Innovation Act (TIFIA) program.

“There are countless promising transportation projects with the potential to better connect people to housing, jobs, schools and more–but that never get off the ground because of a lack of financing,” said Buttigieg in a release. “The DOT has long offered flexible, low-cost financing to help bring some of those ideas to life, and now, with TIFIA 49, we’ll be able to support more of them than ever, and lower costs for taxpayers.”

“With its significant lending capacity, USDOT can play an integral role in supporting projects that make our transportation system more accessible, resilient and sustainable,” said Build America Bureau Executive Director Morteza Farajian. “The Bureau team is ready to partner with project sponsors on effective and efficient concepts, provide technical assistance on innovative approaches, and support them through the loan approval process.”

According to USDOT, sponsors of projects that include the activities listed below would be deemed eligible to apply for loans up to 49% of project costs under the TIFIA 49 initiative:

Until now, USDOT says, the only projects eligible for financing of up to 49% included rural projects, as well as INFRA, Mega and Rural Grant “Extra” projects, which are “highly-rated projects that were not granted discretionary funds due to limited resources.”

According to USDOT, the Bureau will conduct regular data-based assessments of the initiative’s effectiveness through Key Performance Indicators (KPIs) and will make changes as appropriate. In addition to financing, the Bureau also “provides technical assistance for project sponsors and plans to expand outreach and technical assistance capabilities to assist project sponsors to take full advantage of this initiative,” USDOT says.

The Canadian Province of British Columbia recently issued a request for qualifications (RFQ) for the second procurement of the Surrey Langley SkyTrain project, a 16-kilometer extension of the Expo Line from King George Station to Langley City Center that “will provide high-quality, low-cost transportation for people in Surrey, Langley and Metro Vancouver.” It is the first rapid transit expansion south of the Fraser River in 30 years, according to the Province.

As part of the competitive selection process, the RFQ seeks to identify a contractor for the construction of eight new SkyTrain stations, including active transportation elements, such as cycling and walking paths around the stations.

Following the RFQ evaluation, the Province says as many as three teams will be selected to participate in the subsequent phase of the competitive selection process, which is the request for proposal (RFP) stage. Responses to the second RFQ are due by Jan. 5, 2023.

According to the Province, the Surrey Langley SkyTrain project will be built using a multi-contract approach, “which will increase competition and enable a broader range of companies to bid on different elements of the project.” The first RFQ, to build the elevated guideway, was issued on Aug 2, 2022.

The third contract, for the design and installation of SkyTrain trackwork, as well as the design, installation and integration of electrical systems, such as power, telecommunications and automatic train control, will be issued later this fall.

On July 14, the Province released the business case for the project, which is expected to begin in 2024 and anticipated to be in operation in late 2028.