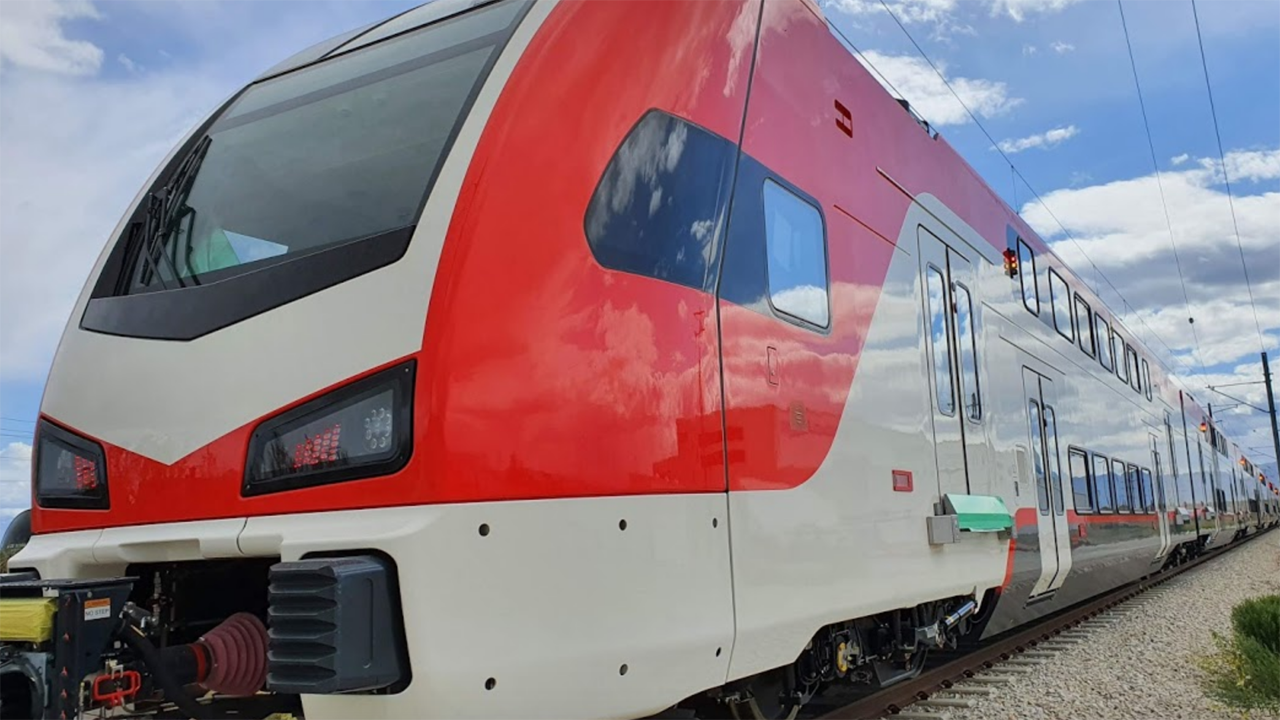 The first Caltrain EMU tested along part of the 51-mile commuter rail corridor July 16-17. (Photograph Courtesy of Caltrain via Twitter)

Caltrain reported on July 18 that the first EMU was tested July 16-17 between the Santa Clara and Tamien (San Jose) stations, along its 51-mile commuter rail corridor (see map below).

The train was outfitted with foam rubber padding to simulate the maximum clearance area as it traveled at 5 mph, pulled by a diesel locomotive. “No major problems arose over the course of testing, and further clearance testing will be conducted throughout the rest of the corridor in the near future,” the agency said.

The next test is slated to take place later this year, when the train will operate under its own power via the Overhead Catenary System (OCS).

The EMUs will replace Caltrain’s existing diesel fleet. Caltrain awarded Stadler a $551 million contract in August 2016 for 16 six-car KISS bilevel EMUs, with an option for a further 96 cars worth an additional $385 million.

Caltrain’s Electrification Project is upgrading and electrifying the 51-mile double-track system from the 4th and King Station in San Francisco to the Tamien Station in San Jose.

The Capital Metropolitan Transportation Authority (CapMetro) on July 18 broke ground on McKalla Station, a new regional rail transit station being constructed as part of the $7.1 billion Project Connect bus and rail transit improvement initiative. The station will be located on the east side of Q2 Stadium, near Delta Drive, on the MetroRail Red Line between Braker Lane and Rutland Drive. It is expected to open in fall 2023. Also to be constructed along the Red Line is the Broadmoor/Domain Station, which will replace the existing Kramer Station (see map below).

The MBTA Board of Directors on July 19 awarded a $85.98 million construction contract to Barletta Heavy Division Inc. for the Codman Yard Expansion and Improvements project, Commonwealth Magazine reported.

Currently, there are 16 storage tracks at Codman Yard that can hold approximately 70 vehicles. Expansion and improvements will help crews move Red Line trains more easily through the yard and allow for additional vehicle storage. The project will feature six new storage tracks, which will allow Codman to hold more than 100 cars; an upgraded crossover track to improve traffic flow; upgraded LED lighting for better distribution of light throughout the yard and reduced light spillover into the adjacent residential neighborhood; and upgraded track and signal components in the yard and the crossover approaching the yard, according to MBTA.

Last month, the agency’s Red Line Transformation team conducted a walk-through at Codman Yard for builders to observe the site and submit bids. Barletta is now scheduled to begin construction this fall and wrap up work by fall 2025.

HNTB was awarded the project’s design contract in May 2020, and work was completed in May 2022.

“As this project progresses, our team will be able to bring much-needed improvements to the Red Line as quickly as possible,” MBTA Chief of Capital Transformation Angel Peña said. “The upgrades to Codman Yard will benefit all Red Line riders. While construction can be disruptive, our team is committed to implementing mitigation strategies and is always looking for ways to accelerate the timeline and bring these improvements to completion sooner.”

The Province of British Columbia on July 14 released the business case for the Surrey Langley SkyTrain project, which it said is the first rapid transit project south of the Fraser River in 30 years. The project will extend the Expo Line 10 miles (16 kilometers), primarily along Fraser Highway from King George SkyTrain Station in Surrey to Langley City in metro Vancouver. The extension will include eight new stations and three bus exchanges. Once completed in late 2028, travel time from Langley City Center to King George SkyTrain Station will be about 22 minutes, according to the province.

The business case estimate for the total cost of Surrey Langley SkyTrain project is C$4.01 billion, which includes C$3.94 billion in capital cost, C$11 million for planning, and C$60 million in active transportation investments along or near the Fraser Highway. Project funding will come from the Province of British Columbia: (C$2.476 billion), Canadian government (C$1.306 billion) and local government (C$228 million).

The Surrey Langley SkyTrain project will be delivered through three separate sub-contracts: one for the SkyTrain guideway (substructure and superstructure), with a request for qualifications expected in August; one for station construction, with contract procurement expected to begin this fall; and one for the electrical systems, including integration and SkyTrain track, with contract procurement expected to begin as early as December. Major construction is slated to start in 2024.

“With the release of the business plan and confirmation of provincial funding, we are now one step closer to bringing SkyTrain all the way to Langley,” said Rob Fleming, Minister of Transportation and Infrastructure. “Our business plan confirms this major project will be completed two years earlier than expected, helping to transform the way people live, work and play south of the Fraser.”

Santa Clara VTA has teamed with the Green Education Foundation, a Milpitas, Calif.-based nonprofit, to include Neighborhood Donation Recycling Stations (NDRS) at its Milpitas, Almaden, Santa Teresa and Snell stations, plus at two additional locations in Santa Clara.

The recycling stations will be placed in strategic locations, VTA said, making it easy for riders and residents alike to donate items they no longer use, such as shoes, clothes, bags, toys and bed sheets. Reusable water bottles and umbrellas may also be donated.

By diverting usable items from landfills, the recycling stations will help to conserve materials and prevent pollution, according to VTA, which noted that recycling this way will also help to reduce greenhouse gas emissions, as it takes less energy to recycle materials than it does to produce new materials.

Green Education Foundation diverts more than 50 million pounds of materials from landfills annually through partnerships with agencies like VTA, cities and other organizations.