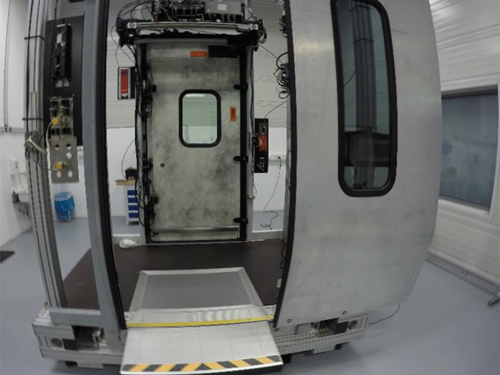 Brightline, the higher-speed intercity passenger rail service to be offered by Florida East Coast subsidiary All Aboard Florida, will be the first North American passenger trains equipped with retractable bridge plates for high-level boarding platforms.

Brightline and carbuilder Siemens collaborated with Kassel, Germany-based Bode to develop the custom retractable bridge plate that is integrated into the railcar door system. Bode, a division of Schaltbau Holding AG, is a global manufacturer of door systems for rail vehicles, buses and automobiles.

Prior to the doors opening, the retractable bridge plates (which Brightline is calling a “gap filler”) will extend up to 12 inches from the train and pivot to contact the station platform, creating a flush surface for passengers to cross and making it easy for those in wheelchairs, pushing strollers or luggage to board or alight. The bridge plates will also improve passenger safety by effectively eliminating the gap that normally exists between passenger cars and high-level platforms.

“In order to make boarding our trains fast and easy for our all of our guests, we are using the latest technology available and have customized it to create a smart solution unique to our trains and stations,” said Brightline Senior Vice President of Railroad Operations Gene Skoropowski. “In building our trains, we are innovating to make train travel easier and more comfortable for all of our guests. We are the first passenger train in the U.S. using this technology from Bode.”

Brightline’s trains are being constructed by Siemens in Sacramento, Calif. The first passenger coach shell was completed recently and is going through a finishing process, preparing it for final assembly. Brightline is expected to take delivery of the first trainsets later this year. Construction is also under way on Brightline’s stations in Downtown Miami at MiamiCentral, Fort Lauderdale, West Palm Beach and Orlando.

To see a demonstration video of Brightline’s retractable bridge plate, click HERE. Gene Skoropowski, an iconic figure in U.S. passenger rail and a recipient of Railway Age’s W. Graham Claytor Award for Distinguished Service to Passenger Transportation, is seen in the video, testing the unit.

(Editor’s note: Portland Tri-Met’s low-floor light rail vehicles, built by Siemens, were the first passenger railcars in North America to be equipped with retractable bridge plates, albeit for low-level platforms. These LRVs were also North America’s first low-floor units. The industry-accepted technical term for Brightline’s “gap filler” is “retractable bridge plate,” though we surmise that “gap filler” may prove to be a better term for the general public, which may be familiar with the “watch the gap” announcements on trains that use high-level platforms. This is the first time we’ve ever seen “gap filler” used. The familiar “watch the gap” announcements used globally (in Britain, the announcement is “mind the gap”) are generally believed to have been introduced on the Long Island Rail Road a number of years ago when an LIRR passenger fell between the cars and the high-level platform into the “gap.”