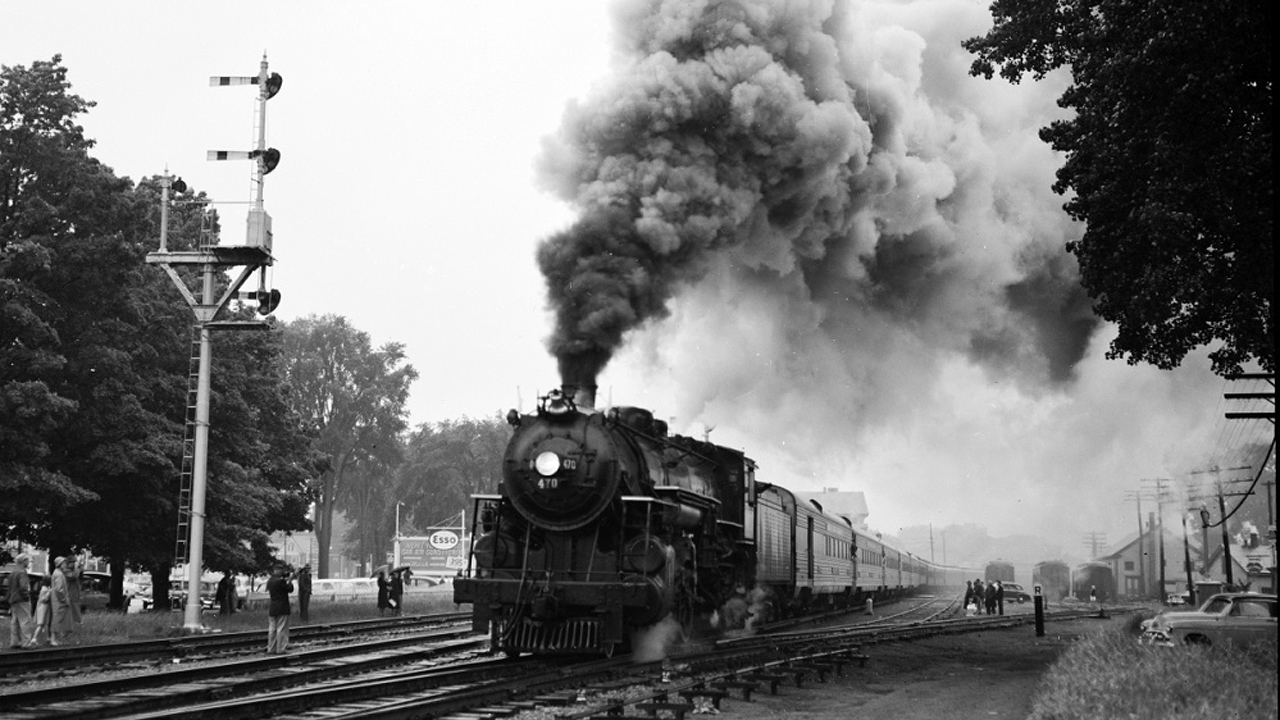 Occasionally, rail advocates and bicycle advocates agree on an issue, such as placing bike racks on trains, if there is enough room for them. Often, though, relations between the two constituencies are stormy. In fact, they can be downright adversarial, especially if the right-of-way over which they stake their competing claims is not wide enough to accommodate both a rail line and a bicycle trail. The two sides have been engaged in battles around the country for years.

This writer recently visited Augusta, Maine’s capital, and witnessed a skirmish in the ongoing conflict between advocates for rails and trails. The setting was an “informational” meeting of the Augusta City Council on the evening of Aug. 23, when an advocate for a “rail trail” argued his case, and four rail advocates sought to refute it. The discussion centered on which mode the city should support, if there is insufficient space for both, but it has long-term implications about what sort of travelers would be welcome in Augusta in the future.

Keith Edwards’ headline in the local newspaper, the Kennebec Journal, summarized the issue: “Augusta may have to choose—rail service or trails.” Edwards began his report in the Aug. 24 edition with the question “Trails or trains?” and continued: “City councilors are asked to affirm the city’s separate commitments to passenger rail service and the extension of a biking and hiking trail to connect Augusta to Topsham.” Then came the cautionary sentence: “But choosing one could potentially doom the future of the other, advocates told city councilors recently.”

The August meeting was a continuation of a saga that began in December 2014. The City Council passed a resolution at that time expressing support for an extension of rail service to Augusta, but apparently only in principle. Edwards reported on that meeting in the Kennebec Journal: “A City Council resolution would not obligate the city but would provide an official show of support for the return of passenger rail to Augusta.”

The plan currently proposed by the Maine Rail Group, Inc. (MRG), a not-for-profit advocacy organization in the Pine Tree State, calls for an extension of Amtrak Downeaster trains from Brunswick to Augusta, along a state-owned 34-mile line. Today there are five daily trains in each direction between Boston and Brunswick, through Portland. The MRG recommended a station near Water Street, downtown Augusta’s main commercial street (on the west side of the Kennebec River) and a larger terminal with parking facilities at the former Slater Tissue Mill site further north and on the east side of the river. Advocates say that service could be extended later from there to Waterville and Bangor. When the Maine Central Railroad ran passenger trains on the route until 1960, it took about one hour to run between Brunswick and Augusta. The passenger station on Water Street was torn down in 1961, shortly after the demise of the last passenger train.

Frank O’Hara, an advocate for the trail and a resident of the nearby town of Hollowell, kicked off the discussion. He said that people were happy with the rail trail to Gardner, another nearby town, and claimed that the proposed trail would be good for tourism, because cyclists would bring their bikes to Augusta and ride. He said that there are only a few daily buses to Portland and few riders on those buses. He questioned the wisdom of spending money to support passenger rail, expressed the hope that the right-of-way would be wide enough for both a rail line and a bike trail (an assertion that MRG members disputed), and suggested the alternatives of running a rail line alongside the Maine Turnpike, or even building a new high-speed rail line, two alternatives that rail advocates reject.

Three MRG members showed up to support the return of passenger trains to Augusta. The first to speak was Portland resident Richard Rudolph, an MRG board member and board chair of the Rail Users’ Network (RUN; a national organization, of which this writer is also a Board member). Rudolph had supported the rail project at the 2014 meeting, when he praised it for its intermodal character, status as a potential extension of the Downeaster line, and potential for spurring economic development.

At the recent meeting, Rudolph mentioned similar development near the Brunswick station, where trains have terminated since 2012 (until then, they ran only as far as Portland). He repeated his other arguments from 2014 at the recent meeting, and cautioned against turning the potential rail corridor into a trail without a feasibility study and a thorough analysis of the consequences. A proposal for $300,000 in state funds for such a study failed in the last legislative session, but advocates plan to try again in the next. Rudolph added that trains would offer all-weather transportation to such destinations as Portland and Boston, an important consideration in Maine.

Jack Sutton, another MRG director, cautioned that if the tracks are paved over to make a trail, it would be impossible to restore rail service: “How are you ever going to get people, an established constituency, off the trail, once it’s established and running?” he asked.

Other advocates in other places have noted that no rail line has ever become a rail trail and later was restored as a passenger rail or rail transit line. While some rail-to-trail segments have been returned to rail freight service, “rails-to-trails” has always been a one-way trip, as far as passengers are concerned. MRG President Russell Barber said that 60% of Maine’s population is within one hour of public transportation, and if trains ever run through Augusta to Bangor, 90% would be. He made the standard “green” arguments for rail and said that young people want viable downtown areas, which rail service facilitates.

Wayne Davis, who is generally credited with getting the Downeaster trains started in 2001, also appeared at the meeting. He recounted the struggle to get trains running from Boston to Portland again after a 36-year absence, noted that there were 600,000 riders on the Downeaster trains last year, and called for “rail banking” of the rights-of-way in Maine.

A sympathetic voice on the Council was at-large member Mark O’Brien, who had voted for the original resolution in 2014. He said the trains could provide economic benefits to the city, and called on his colleagues to think about what is best for Augusta, rather than the communities to the south, where the proposed trail would be located. “There are plenty of places to walk or bike, but there aren’t many places to run a train,” he warned.

Debates like the one in Augusta have occurred in many places, but one of the under-reported issues is what sort of visitors local officials want to attract to their cities. O’Hara claimed that bicycle riders would come to the area to ride on the trail, but he did not say how they would get there. Maybe a few could ride all the way on their bikes, but that mode of transportation is limited by geography and distance. Anyone coming from further away would need to use an automobile. Potential visitors who do not have automobiles, including those who live in or near Boston and choose to live a car-free urban lifestyle, would be excluded. Such a lifestyle is possible in the Boston area, using the MBTA for local transportation, and potentially going to Portland or other towns in Maine on the Downeaster train, but it does not include a convenient means for reaching Augusta and other towns north of Brunswick.

As this writer’s experience demonstrates (and as this writer explained to the Augusta Council in a brief statement), it is difficult to visit Augusta without an automobile. The bus station for Concord Coach (and one daily Greyhound run) is located on Industrial Drive, about four miles from downtown. If the name of the street on which the bus station is located is not sufficiently daunting, getting into town on local transit is. There are only a few routes, and they are not operated by the sort of municipal or other governmental transit authority that runs most of the nation’s bus and rail transit systems. Instead, they are operated by the Kennebec Valley Community Action Program (KVCAP), a social service agency that operates limited “lifeline” service in Augusta and as far away as Waterville. Service is limited on weekdays, and there is none on weekends. The last runs on most routes, including the one that stops “on request” at the bus station, leaves at 3:30 PM. Most of the hotels are located two miles or more west of downtown, and there is no bus route that connects them with the activity centers on Water Street and State Street, or the State House. This writer walked; it took about an hour one-way.

In actuality, there is little transit in Maine, north or east of Brunswick, where the Downeaster corridor ends. The Maine Rail Group is advocating for passenger trains to Augusta and to Lewiston-Auburn, on another line further south. They also want to see both lines extended someday to Waterville, where they join, and then further to Bangor. Rudolph stressed the importance of service to Augusta, saying “if Augusta doesn’t support it, it would be much more difficult to achieve our objectives.” He added that passenger trains would create additional access to the state capital and alleviate traffic congestion on Interstates 95 and 295. Also on the MRG’s wish list is service from Brunswick to Rockland, a line that they believe has potential to draw tourists during the summer, even if it operates only seasonally.

In the meantime, any expansion of passenger rail in the Pine Tree State must wait until the next legislative session. Will the current Downeaster line someday serve as the basis for a network of passenger trains in Maine? Will Augusta, a capital with almost no supporting transit, ever offer rail service that will take Bostonians, Portlanders and others conveniently to the State House and the commercial activity on and near Water Street? Or will Augusta continue to be essentially inaccessible except by automobile, even with a bicycle trail that, at one time, was a rail line?

At this writing, we have not heard any further news, but time will tell.