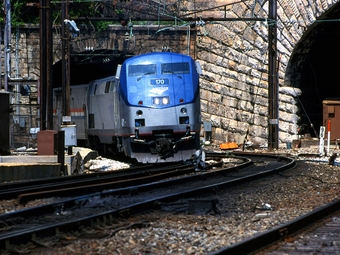 With a goal of addressing a longstanding bottleneck along the Northeast Corridor, the Federal Railroad Administration, Maryland Department of Transportation, and Amtrak are advancing an engineering and environmental study to examine various improvements to the 141-year-old Baltimore and Potomac (B&P) Tunnel in Baltimore, Md.

The two-track tunnel, which opened in 1873, is located between the West Baltimore MARC Station and Baltimore Penn Station and is used by Amtrak, Maryland’s MARC Commuter Rail trains, and Norfolk Southern freight trains. “The existing track geometry and outdated tunnel design significantly impedes rail movement along the NEC, creating a low-speed bottleneck impacting approximately 85 Amtrak trains, 57 MARC commuter trains, and one to two freight trains each day,” Amtrak said. “A $60 million federally funded study, which began last fall, is moving into a new phase with expanded public outreach and opportunities for residents and commuters to learn more about the project’s purpose and need.”

The study, which should be completed in mid-2017, will include development and evaluation of various alternatives based on the need to enhance rail safety and to improve capacity, reliability, and travel time for commuter, freight, and intercity passenger rail service on the NEC. Alternatives will include the No Action Alternative, as well as a full array of Build Alternatives such as rehabilitation of the existing tunnel and a new tunnel on a new alignment.

“Baltimore’s B&P Tunnels are some of the oldest structural assets on the NEC and a major capacity bottleneck for both passenger and freight trains,” says the Northeast Corridor Infrastructure and Operations Advisory Commission. “The tunnels were constructed in 1873, just eight years after the end of the Civil War. A series of three narrow-profile tunnels in a more than one-mile stretch, they were originally constructed out of brick and stone masonry, though repairs through the years have introduced additional building materials. With just two tracks, the B&P Tunnels west of Baltimore Penn Station and the Union Tunnel to the east force the NEC to constrict down from four tracks as it passes through downtown Baltimore. Due to its tight curvature and aged structural conditions, the tunnel limits train speeds to 30 mph—down from 60 mph or higher on its approach tracks—and due to its height, the tunnel precludes the use of doublestack freight cars. The B&P Tunnels underwent rehabilitation in the 1980s, but that effort was not intended to be a permanent fix, and the tunnels continue to require ongoing maintenance. High water saturation in the soil beneath the tunnels, for example, causes its aging floor slabs to sink, forcing Amtrak to repeatedly make repairs. While the alignment and design of any new tunnel is yet to be determined, planning will consider options for supporting higher-speed train service and creating separate routes for passenger and freight trains through Baltimore. New tunnels could free the existing tunnels for renewal, ultimately for additional capacity, and make Amtrak and MARC less susceptible to maintenance-related delays.”

“The B&P tunnel is a crucial link on the Northeast Corridor, making Amtrak and MARC service possible through the City of Baltimore,” said Amtrak President and CEO Joe Boardman. “As owners and stewards of this vital piece of infrastructure, we know that a new or rehabilitated tunnel is what we need to maintain and ultimately improve reliability, speed and safety for all trains—Amtrak, MARC, and others—that use it. This study is an important step forward toward realizing that goal, and will help to expand economic development opportunities for the greater Baltimore region.”

“The B&P Tunnel is as much a critical link to the Northeast Corridor today as it was in 1873 when it was built,” said Federal Railroad Administrator Joe Szabo. “The study being undertaken is the first step in replacing this aging infrastructure with a new tunnel that meets the increased demand for capacity and enhances the efficiency of rail operations on one of the busiest rail corridors in the world. A key component of the study will be to assess input from the people of Baltimore, and we look forward to that feedback.”