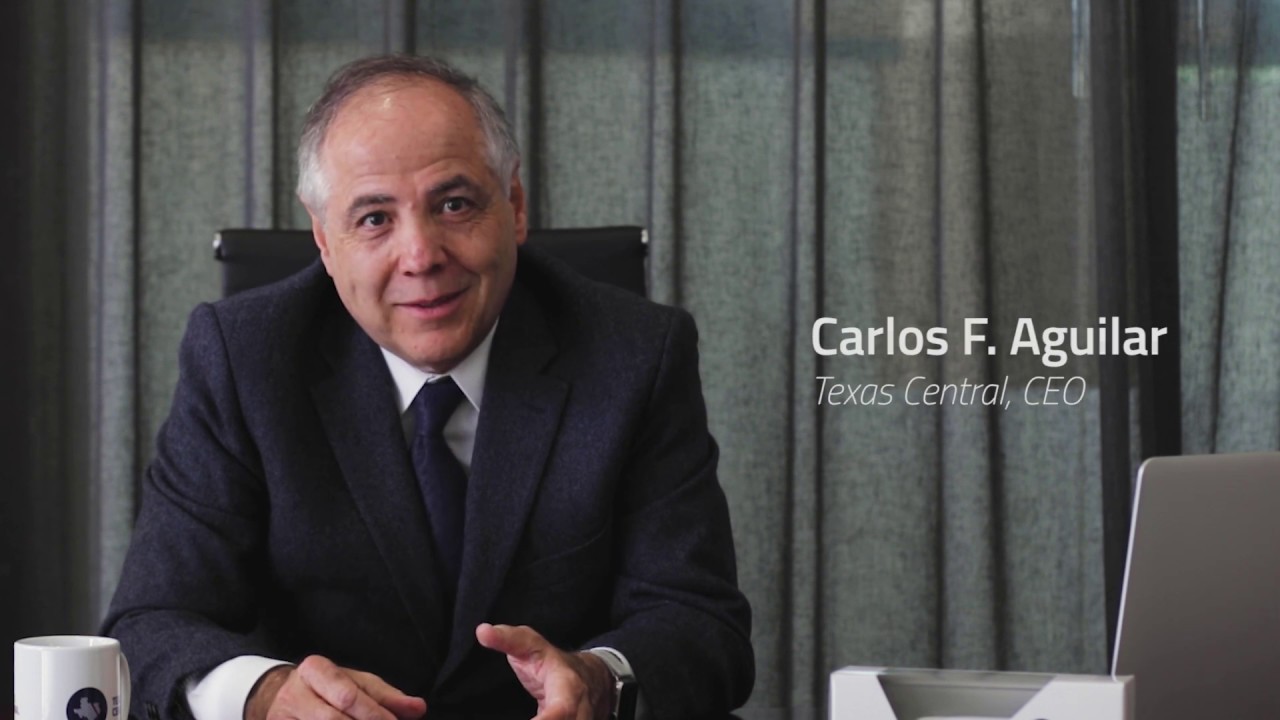 Texas Central, the embattled high-speed rail project in the Lone Star State, appears to have taken a major step toward its own demise, as CEO and President of Texas Central Partners Carlos F. Aguilar stepped down on Sunday, June 12. From a non-legal standpoint, this appears to leave the project adrift after Aguilar had led it through a period of hope and through a sudden downturn in its legal fortunes. Legally, it is unclear that Aguilar’s departure will mean much, in light of an impending ruling by the Texas Supreme Court that would stop the project in its tracks, none of which have yet been built.

Aguilar announced his resignation not on the Texas Central website, but in a post on his LinkedIn page. He began his statement by saying: “Given news reports in the international press today, I am announcing my departure from Texas Central.” He went on to praise his co-workers and the early accomplishments of the project when it appeared that the ambitious plan to build HSR from Dallas to a park-and-ride facility near Houston would come to fruition. He said: “I am immensely proud of the achievements of OUR team, gaining among many other accomplishments, end-to-end regulatory approvals for the first true high-speed rail project in our nation’s history. This was a most conscientious and complex endeavor, carefully addressing concerns from landowners and stakeholders, and providing opportunities to all sectors of our society, a FIRST for U.S. infrastructure” (emphasis in original).

In his statement, Aguilar acknowledged reality while expressing hope for the future, saying, “While I could not align our current stakeholders on a common vision for a path forward, I wish the project the greatest success and remain convinced of the importance of this venture for the safety and prosperity of ALL Texans. Texas and the U.S. deserve the best transportation options, and I am convinced that in time, these will become a reality.” He concluded with: “We can do this!”

The previous post on Aguilar’s LinkedIn page was an announcement on July 14, 2021 that Spanish firm Renfe had been chosen as “early operator” for the Texas Central project, although Texas Central itself announced that agreement on October 30, 2018 on its website, www.texascentral.com. That was before the project’s legal prospects had taken a dramatic turn for the worse in the case of Miles v. Texas Central, as I reported in the five-part series Is Texas Central a Railroad? last January and February.

NBC5 (Dallas/Fort Worth area) reported on June 14, “Texas Central does not see Aguilar’s resignation as an end of its project. The company said that it still plans to break ground soon on the 240-mile rail line” (found at https://www.nbcdfw.com/news/local/texas-news/texas-central-ceo-resigns-company-plans-to-break-ground-on-high-speed-rail/2992264/). That report did not say how such a groundbreaking would be accomplished.

A more-comprehensive report on Aguilar’s departure by Kim Roberts, published on Monday in The Texan (found at https://thetexan.news/texas-central-high-speed-rail-ceo-carlos-aguilar-announces-departure/) painted a more-ominous picture. She reported: “A Spanish news site in Madrid, ‘La Informacion,’ reported that the entire management team of Texas Central has departed, and the project has entered ‘a hibernation phase in search for financing.’” Roberts also reported on a number of obstacles that Texas Central has faced recently, including the Miles case and uncertainty that an anticipated agreement that would have brought Japanese Shinkansen equipment to the proposed line could be in doubt. She also reported that Aguilar had said last fall that the projected needed $12 billion in infrastructure funding, despite earlier claims that it would be privately financed. She had previously reported on some of these difficulties on October 26, 2021 (found at https://thetexan.news/dallas-to-houston-high-speed-rail-project-faces-legal-and-financing-obstacles-and-criticisms/).

Roberts’s recent report also quoted Troy Duhon, an outspoken opponent of the project, as saying, “We are not surprised to hear the news of Carlos Aguilar’s departure,” and “The unorthodox LinkedIn announcement speaks to the company’s lack of staff, lack of resources, and lack of leadership, with no successful path forward. No money, no permits, no progress … It is abundantly clear that this project is more than dead in the water, especially when the captain jumps ship.” Duhon, a local attorney and Waller County judge, voiced his opposition to the project at a Congressional hearing about HSR on May 6, 2021 (reported here on May 7, 2021).

Another indication of Texas Central’s woes came from a report by Houston Chronicle transportation reporter Dug Begley from April 25 that Texas Central owed at least $623,000 in property taxes at the time, that the company had been “shedding staff during the pandemic” and that “Texas Central officials did not respond to a request for comment.” I also checked Texas Central’s website and found no releases more recent than Sept. 21, 2020 on its “Media Center” page. The “Project Timeline” on that page still claimed that construction would start in 2021.

Despite the ominous picture reported about Texas Central elsewhere, Texas Rail Advocates continues to push for the project. That organization reported Aguilar’s departure on Monday on its website, www.texasrailadvocates.org (found at https://texasrailadvocates.org/post/texas-central-ceo-carlos-aguilar-steps-down-after-6-years) in a straightforward manner that appeared more resigned than hopeful: “Right now the railroad is stymied from moving forward because of a case pending since January before the Texas Supreme Court. A rural Texas landowner was granted a rehearing before the Supremes claiming that Texas Central had no right to obtain a strip of land on his property needed to build the high-speed rail line between Dallas and Houston. Oral arguments were heard in January on the eminent domain case, and while all sides await the decision from the Texas Supremes work on the project ground to a halt with most all of the staff laid off.”

Texas Rail Advocates also reported, “It has been six months since the hearing and not a peep from the Texas Supreme Court. That has a chilling effect on all the work that Texas Central has accomplished to date to get their project to the final phase,” according to Texas Rail Advocates President Peter LeCody. “I’m sure investors and Texas Central want to know there is a clear path forward, but right now the project is in a time warp. The railroad got environmental clearance, and a green light on the route from the Federal Railroad Administration. Now, the final step in getting operating authority from the Surface Transportation Board can’t be completed until the Texas Supreme Court decision comes down.’”

The report mentioned efforts by Republican Congressman Jake Ellzey of the state’s 6th District to kill Texas Central and any similar high-speed rail projects that might be proposed in the future, as well as legislative efforts at the state level to kill it, but also said. “The railroad still enjoys strong bipartisan support from North Texas and the Greater Houston region. The high-speed rail effort was touted by both the Trump and Biden Administrations as a significant infrastructure project.” The report again quoted LeCody: “It hasn’t helped that misinformation from some federal and state elected officials has created a toxic atmosphere in the media. If the Texas Supreme Court rules against Texas Central, this will send a chilling message to any private company that wants to build a large infrastructure project in our state. The message is that we don’t want your business.”

Railway Age reported extensively on the Miles case and on Ellzey’s bill in a five-part series collectively headlined Is Texas Central Really a Railroad?, which ran in late January and early February of this year. Part 4, headlined Is This the End of the Line?, ran on this site on Feb. 7 and examined the case in detail. James Frederick Miles, a local landowner, objected to Texas Central coming onto his land to obtain an easement that would allow it to build a portion of its proposed elevated railroad structure. He filed suit in the local court and won. The intermediate appellate court reversed, holding that Texas Central was a “railroad company” within the meaning of the applicable statute, and the Texas Supreme Court denied review. That looked like a green signal for the project to move forward. In a surprise move last summer, the Court changed its mind, granted Miles’ petition for review, and invited the State to intervene in the case on Miles’ side.

All nine members of the Court are Republicans; four were elected and the other five were appointed by Gov. Greg Abbott to fill unexpired terms. All statewide elected officials in Texas are Republicans, as are many residents of the counties between Dallas and Houston. While Democrats are strong in cities like Dallas and Houston, Republicans dominate in rural areas and in state politics, so it appears highly unlikely that the Court will affirm the ruling below and allow Texas Central to build.

Things looked hopeful for Texas Central until the Court reversed its previous ruling that denied Miles’ petition for review. It looked like the project had a reasonable chance of operating some day. It was on track to run Japanese Shinkansen equipment, and the FRA had promulgated 49 C.F.R. Part 299, which specifically related to “Texas Central Railroad High-Speed Rail Safety Standards” on Nov. 3, 2020. Texas Central had also won in court until the Texas Supreme Court changed its view of the case.Even if the Court allows the railroad to keep going, it has lost its leader and seems to have run out of money. It hasn’t died yet, but I might end up writing its “official” obituary before long.