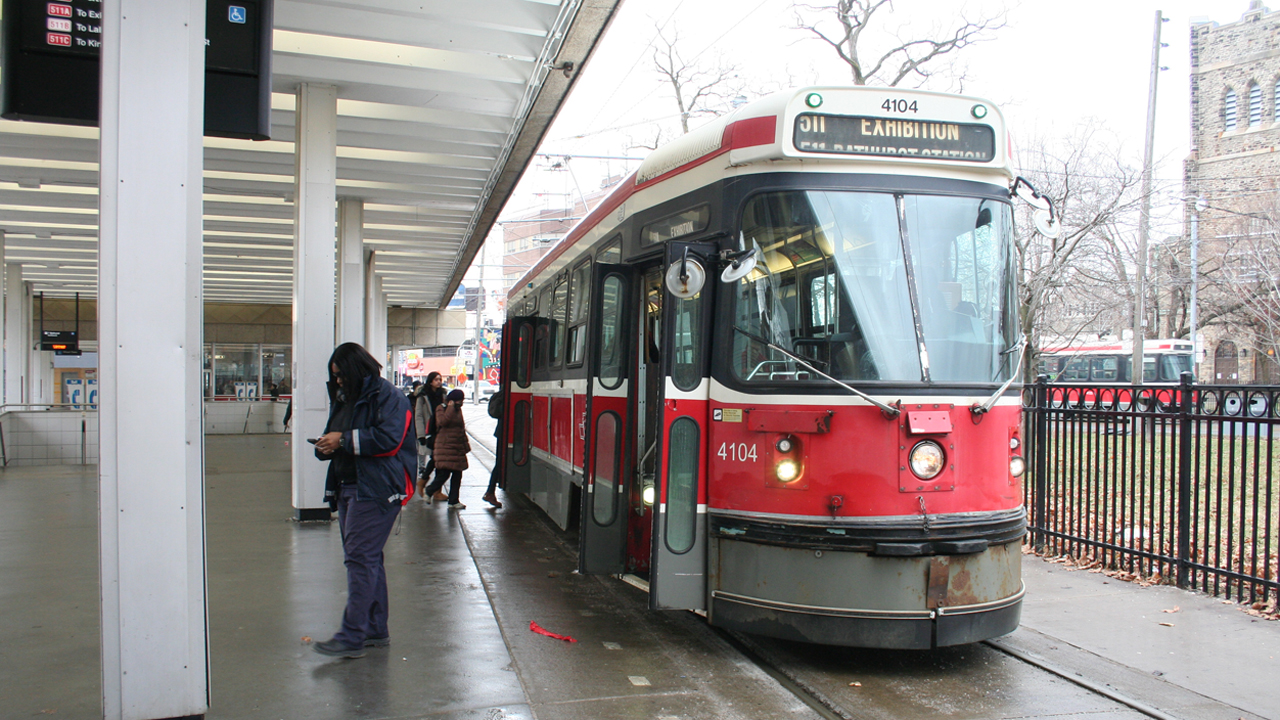 As Autumn descended on Toronto, the once 196-car fleet had dwindled to about 40 serviceable units. The end came on Sunday, Dec. 29, which was 40 years to the day after the arrival of the first CLRV in Toronto, from Switzerland. CLRVs were in service on part of the Queen crosstown route, providing free rides to the public.

The CLRV was the third new car type ordered by the TTC, the predecessors being the legendary Presidents Conference Committee (PCC) and Peter Witt streetcars. Thankfully, both the first TTC PCC, car 4000, and the first Peter Witt, 2300, have been preserved in museums.

Development of the CLRV, a completely new design, occurred as the result of a confluence of events in the early 1970s. At that time, the TTC’s PCC fleet, which had been the world’s largest, was 20-25 years old and showing the effects of heavy service on Toronto’s streets (the last Peter Witt cars were retired from regular service in 1963).

PCC production had ended in North America in 1952.

TTC management had prepared a plan for the orderly abandonment of all streetcar service by 1980. Their rationale was that the newest PCCs (delivered in 1951) would have reached the end of their economical service lives by then. European designs were not considered suitable for Toronto operating conditions.

However, neither the TTC nor Toronto City Council were anti-streetcar, as had been the case in cities such as Vancouver or Montreal; they were simply reacting to perceived circumstances.

At this point, concern for the environment was growing rapidly, and many people in Toronto questioned the wisdom of replacing clean, high-capacity streetcars with polluting diesel buses.

A citizens group, the Streetcars for Toronto Committee, felt that there was a viable alternative to abandonment, and in 1972, convinced City Council to instruct the TTC to cancel that plan. The Commission agreed to undertake a major overhaul of 173 of its best PCCs over a three-year period, and to investigate the purchase of 200 new streetcars to replace the rest of the PCCs.

In 1973, the Province of Ontario stepped in. Premier Bill Davis was riding high on his 1971 decision to cancel the controversial Expressway, which would have decimated central Toronto. In fact, this act represented the end of Toronto’s expressway construction program.

The Provincial government established the Ontario (later Urban) Transportation Development Corporation to, in a nutshell, develop and market new transportation systems. UTDC was given the contract to procure new streetcars for the TTC. The cost would be largely borne by the Province.

UTDC launched a worldwide study of available technology and designs; their relation to the defined requirements, not just of the TTC, but other transit properties. Ultimately, the decision was made to develop a new design that would belong to UTDC for manufacturing and marketing purposes.

Prior to UTDC’s involvement, the TTC had solicited proposals from North American railcar builders. Hawker Siddeley Canada Ltd. (HSCL) of Thunder Bay, Ontario, builder of most of the TTC’s subway car fleet, submitted a proposal, with an artist’s conception and a scale model. Their version was called the Municipal Service Car (MST); it had a bus-like body and semi-low-floor design. HSCL’s involvement ended with UTDC’s arrival on the scene.

The TTC had already developed its operational and design requirements. The loading gauge was to be as large as possible, within clearances (basically, the dynamic envelope of a Large Witt car). A single-unit car, with multiple-unit (MU) capability, was specified, as the TTC was not interested in articulated streetcars at this time.

Clearance testing of special work curves was performed in a novel fashion. One of the TTC’s flat motors had paint cans attached to its extremities; the work car traversed all system curves, giving off a trail of paint to confirm that clearances were within specification. Special trackwork at intersections received particular attention.

Basic design of the CLRV was a joint effort of TTC and UTDC engineers. Commission staff were headed up by Len Bardsley, P.Eng., Manager of the Equipment Department, and Ray Corley, P.Eng., a veteran of 16 years with Canadian General Electric, who came aboard in 1974 as Superintendent of Design and Development. Canadian industrial designer Claude Gidman prepared early concepts.

UTDC wished to market the CLRV to other transit systems, and consequently the car possessed design features to assist this process. These included the capability for double-ended operation, and high-level loading, if requested by a customer.

MU capability was added, with Scharfenberg couplers. At this time, the TTC was operating MU cars on the busy Queen route, which, however, was discontinued in 1977. It was expected, though, that 22 CLRVs would be assigned to the approved Scarborough LRT line, operating in two-car trains. This became redundant when UTDC persuaded Scarborough Council and the TTC to accept the Corporation’s Intermediate Capacity Transit System (ICTS) for this operation.

UTDC had specified an outside-frame truck for the CLRVs, with higher-speed suburban operation in mind. Again, this became a redundancy—a troublesome and expensive one—with city street operation. The heavier truck, as compared to an inside-frame version, caused problems in operation, with noise and vibration issues resulting in numerous public complaints; derailments at switches; and deterioration of the concrete-encased track structure.

Some of these problems were resolved by replacing the original Bochem wheels with SAB wheels, similar to PCC wheels. The Bochem wheels had a rubber layer between the hub and the steel rim, which would flex, rather than pulling the opposite wheel through a single-point switch.

UTDC had contracted all major CLRV subsystems directly with vendors. The contract for final detailed design, and construction of 10 prototypes, was awarded to the Swiss Industrial Company (SIG), located at Neuhausen am Rheinfall, Switzerland. This company may have been chosen, rather than one of the major builders, because of its willingness and ability to build such a small order.

As part of the contract for the six cars supplied by SIG, tests were conducted in a climate chamber in Vienna, Austria, with car 001. Cars 002 and 001 performed operational testing on the private Orbe-Chavornay Railway near Lausanne, Switzerland. These cars later operated in MU mode. Two sets of standard gauge CLRV trucks were supplied for this testing (the TTC’s track gauge is mainly 4 feet, 10 7/8 inches). Pantographs were temporarily applied.

Arrival of the first CLRV to reach Toronto involved car 4002, which was unloaded at Hillcrest Shop on a frigid Dec. 29, 1977. Earlier, in November, the contract for 190 production cars had been awarded to Hawker-Siddeley.

Almost two years elapsed before the CLRVs were considered ready for revenue service—Sept. 30, 1979, on the Long Branch route. Compare this with 1938, when the first PCCs reached the TTC in August, and entered service within two months.

In fairness, the CLRV was a far more sophisticated car, with such features as on-board computers, spin/slide control, and energy-saving chopper controls, to name a few. Maintenance staff at Hillcrest and the carhouses had to be trained and qualified on the CLRVs, as well as operating employees. A mockup of a CLRV control area was installed at Hillcrest for operator training.

Various mechanical and electrical modifications were made before service began. Overall commissioning of the CLRVs was performed under the direction of Ray Corley, who became a familiar figure in his TTC bump cap and shop coat.

The six Swiss cars were accepted between September and December 1978; the final HSCL CLRV received approval on Feb. 22, 1982.

Several of the changes were quite visible: White doors were eliminated; coupler openings were covered over after removal; sealed windows were replaced with opening-sash, after numerous rider complaints (the CLRVs were not air-conditioned, except for car 4041, much later); and angled seating on the Swiss cars was replaced with conventional seats. The red interior paint scheme on the Swiss cars essentially remained to the end. The red stanchions in place with angled seating were replaced with unpainted stainless steel stanchions when standard 2-and-1 lateral seating was applied, similar to the HSCL fleet of CLRVs.

A new paint scheme of bright red, white, black and grey was created for the CLRVs. This was subsequently adopted for buses and trolley coaches as well. In the early 1980s, the couplers were removed as being redundant and adding unnecessary weight. Protective shrouds were placed over the front coupler opening, as a safety measure.

Rather surprisingly, the CLRVs used pressurized air to operate the suspension, braking, windshield wipers, doors and rail sanders. The postwar PCCs had all-electric systems, which increased reliability. By 2013-2014, as Toronto suffered extremely cold winters, the deteriorating CLRV air systems caused reliability issues. Work was carried out to correct these problems.

By about 1990, Ray Corley, newly retired from the TTC, stated, in print, that “the CLRV is as good now as it will ever be.” He evidently did not elaborate on this enigmatic statement.

As previously noted, the CLRVs debuted in revenue service on Sunday, Sept. 30, 1979, following ceremonies the previous day at Roncesvalles Carhouse and Humber Loop. By this time the streetcar routes had been assigned numbers, replacing names on sign box linens, for example, 504-King.

The CLRVs entered service as follows:

As the CLRVs arrived, the secondhand PCCs from cities such as Cleveland were retired. In the late 1980s, 52 high-capacity Articulated Light Rail Vehicles (ALRVs) joined TTC’s streetcar fleet. The ALRV, also unique to Toronto, shared much of the CLRV’s industrial design. The new cars were soon sufficient to handle all service demands, especially during the onset of a long period of declining ridership beginning in the early 1990s. The remaining fleet of 19 A-15 class PCCs were retired in 1995, with the TTC retaining two cars, 4500 and 4549 (class A-15H), for historic purposes.

UTDC had hoped to sell CLRVs to other transit systems, but these sales never materialized. Three cars—4027, 4029, 4031—were fitted with standard-gauge trucks and sent to Boston in the spring of 1980 for several months of operational testing and evaluation by the Massachusetts Bay Transportation Authority (MBTA). However, in the end, MBTA bought a Japanese car design.

The CLRVs had, by the early 1980s, settled in to an operational routine at the TTC. Passengers praised their smooth riding, bright fluorescent lighting and large windows.

By 2010, though, the CLRVs were nearing the end of their theoretical 30-year life cycles. The TTC had begun considering replacement cars as early as 2005. This was partly driven by the legal requirement that all Ontario public transit be fully accessible by 2025. As well, maintenance of the CLRVs had become difficult, for example, for the computer systems, as replacement parts were no longer available from outside suppliers. The TTC Equipment Department is very capable and resourceful, though, and had been able to keep the aging CLRVs in service.

The TTC, after considerable investigation, and several bids, chose the Bombardier Flexity Outlook low-floor car, ordering 204, with an option for 60 more. It initially intended to retain some of the CLRVs and ALRVs for rush hour service until 2024, and to this end a number of them were refurbished at Hillcrest. However, the deteriorating condition of the cars made this impractical.

The well-documented delays in arrival of the Flexities resulted in some CLRVs and ALRVs being overhauled as a stopgap measure. It now appears that the Flexity order will be completed by Dec. 31, 2019. The TTC has not exercised its 60-unit option, and currently is experiencing a severe streetcar shortage, partly due to increased ridership.

CLRV 4063 was the first car to be scrapped, in March 2009. Rather ironically, PCC 4063 was the first such unit to meet the scrapper, following a 1947 accident. Car 4000, the first CLRV, met its end in December 2017. Preservation had been considered, but the car’s poor condition did not permit this.

The streetcar museum near Rockwood, Ontario, is preserving two CLRVs, a Swiss car, and an HSCL unit. It is hoped that the TTC will keep at least one for charters and other services.

Although the CLRVs never achieved the status of the beloved and legendary PCCs in Toronto, they served the city well for 40 years. They were a unique, Canadian-designed streetcar of which the TTC can be proud.