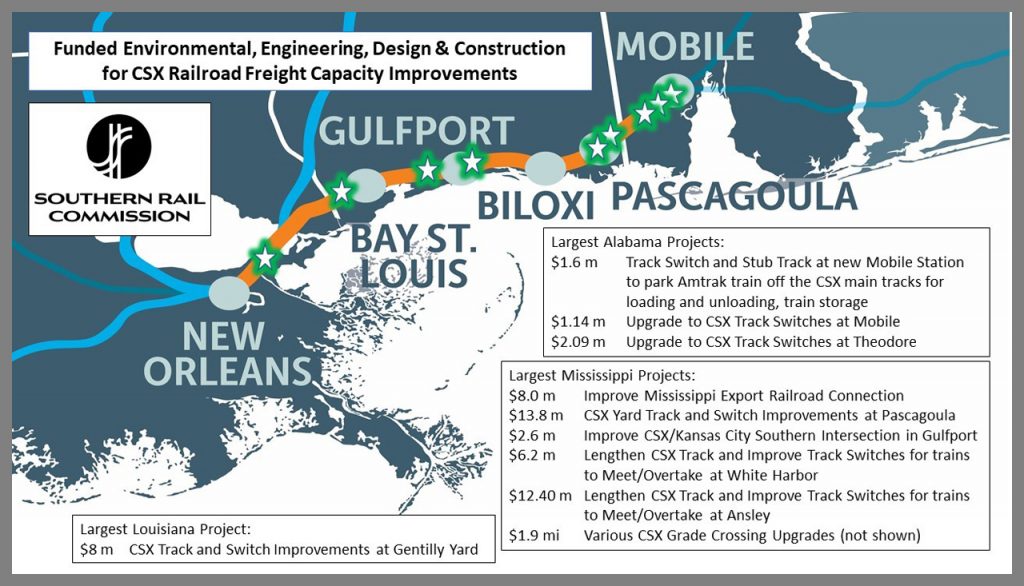 The Surface Transportation Board (STB) on Aug. 6 concluded that the matter of Amtrak providing Gulf Coast service over host freight railroads CSX and Norfolk Southern (NS) “is ripe for adjudication.”

The move follows months of clashes between Amtrak and the freight railroads via STB filings (and years before STB involvement).

STB has now instituted a proceeding on Amtrak’s March 16 application filed under 49 U.S.C. § 24308(e), seeking an STB order requiring CSX and NS to allow Amtrak to operate intercity passenger trains over their lines between New Orleans, La., and Mobile, Ala.

The STB decision (download below) also denies a motion to dismiss filed by CSX and NS, denies as moot Amtrak’s request for track access, establishes a procedural schedule, and appoints an administrative law judge to resolve initially all discovery disputes.

While Amtrak intended to begin service on or about Jan. 1, 2022, an actual start date is unclear. The STB has set Dec. 16, 2021 as the deadline for the railroads to provide proposal(s) on a hearing format.

STB writes in its decision that the “statute’s threshold requirement that the carriers ‘[do] not agree to provide, or allow Amtrak to provide, for the operation of additional trains’ has been met. … In February 2021, Amtrak requested that the carriers allow twice-daily service, and the carriers have not agreed to that request. … Further, for several years, Amtrak has sought to restore service in some manner on the Gulf Coast, and it is unclear how the parties will reach an agreement regarding service on the Gulf Coast without Board consideration of Amtrak’s application. … Therefore, the Board will institute a proceeding.

“The statute requires the Board to consider ‘whether an order would impair unreasonably freight transportation.’ … While the Board will not require Amtrak to agree to completion of the previously commenced RTC [Rail Traffic Controller] study or grant the freight railroads’ motion to dismiss Amtrak’s application because the study has not been completed, the Board recognizes the importance of a study that models—in the context of the line’s present and future traffic volumes and engineering design and conditions—the specific service that Amtrak proposes in its application. The Board therefore expects that evidence on the service’s potential effects on freight transportation, such as an RTC study or other study or studies, will be part of the record in this proceeding, as well as any competing studies or other competing evidence, together with all the inputs, assumptions, and methodologies underlying any study results, including all relevant traffic projections (filed under seal, if necessary). As part of this effort, the Board also expects the parties will detail any infrastructure that they consider necessary for Amtrak to operate additional trains by its proposed start date as well as infrastructure needed in the future to factor in anticipated growth in traffic. The information described above will allow the Board to assess whether the proposed additional train service can proceed without impairing unreasonably freight transportation.

“The Board recognizes the concerns expressed by Alabama state leadership and some railroad and port entities, among others, regarding the potential impacts of passenger service on freight service in the New Orleans-Mobile corridor and the need for a study to assess those impacts and identify mitigation measures. However, as explained above, this proceeding, including evidence submitted by the parties, will provide a forum to assess precisely the matter of concern to Alabama state officials and others, i.e., whether the additional train operations will unreasonably impair freight transportation. Therefore, far from preventing the Board from considering the freight service issues associated with Amtrak’s application, the current lack of unanimous state support for the service indicates a need for the Board to do so under the terms specified in 49 U.S.C. § 24308(e).”

STB also reported: “On July 6, 2021, Amtrak wrote ‘to advise the Board of the current status of Amtrak’s ongoing discussions with CSX[T] and NS[R] to allow Amtrak access to CSX[T] and NS[R] properties and personnel.’ … Amtrak explains that CSXT agreed to Amtrak’s request for access to CSXT property and personnel for certain purposes. … In addition, NSR informed Amtrak that its ‘existing service over NS[R] lines in New Orleans would fully facilitate Amtrak’s access to the safety and operational information Amtrak sought to obtain.’ … On July 9, 2021, CSXT and NSR responded that the request for an interim order is moot in light of Amtrak’s July 6 filing.

“The Board finds that these developments have rendered Amtrak’s request for an interim order moot. It appears that Amtrak has received the limited, non-interfering access it sought. … The Board is pleased that the parties have been able to work together to reach a suitable accommodation on this particular issue and expects them to continue to resolve areas of disagreement such as this as much as possible.”

On the procedural schedule, STB wrote: “To expedite the proceeding, the Board will adopt a procedural schedule in this decision. This schedule will include [a] discovery period, which, along with the time for CSXT and NSR to file their opening evidence, will allow sufficient time for completion of any supporting study or studies and other record development while otherwise enabling this proceeding to move forward expeditiously. The Board encourages the parties to resolve discovery disputes promptly and to recognize that discovery before the Board is broad. … The Board notes, for example, that the disagreement regarding Amtrak access to CSXT and NSR information provided to HDR for the RTC study appears to involve information that would typically be shared, pursuant to a protective order, in a Board proceeding. However, if parties cannot resolve discovery disputes, they should make every effort to raise them as soon as possible within the discovery period. After the discovery period ends, the Board will not look favorably upon requests to pause the procedural schedule to resolve such disputes.

On Aug. 6, Amtrak and the Southern Rail Commission (SRC)—a passenger rail agency led by governor-appointed commissioners in Alabama, Louisiana and Mississippi—issued statements on the STB decision.

Amtrak thanked the STB “for its decision to dismiss CSX and NS’ attempt to block Gulf Coast passenger rail service. This upholds Amtrak’s right to petition the Board for rail access and sets a schedule for a transparent process that will produce an outcome by the end of this year.

“In the meantime, Amtrak is working with the Southern Rail Commission to take steps to begin to operate Gulf Coast Service as soon as possible next year.”

Mississippi SRC Commissioner Knox Ross said: “This STB decision is incredibly gratifying, and the Southern Rail Commission is pleased that the STB refused CSX’s and Norfolk Southern’s effort to dismiss Amtrak’s petition for access to operate passenger rail between New Orleans and Mobile. We are especially pleased that the STB found no need for an environmental review and set an aggressive hearing schedule to resolve this process within an expeditious timeframe that could meet Amtrak’s stated goal of starting passenger service in January 2022. Our communities are ready for the return daily rail service.”