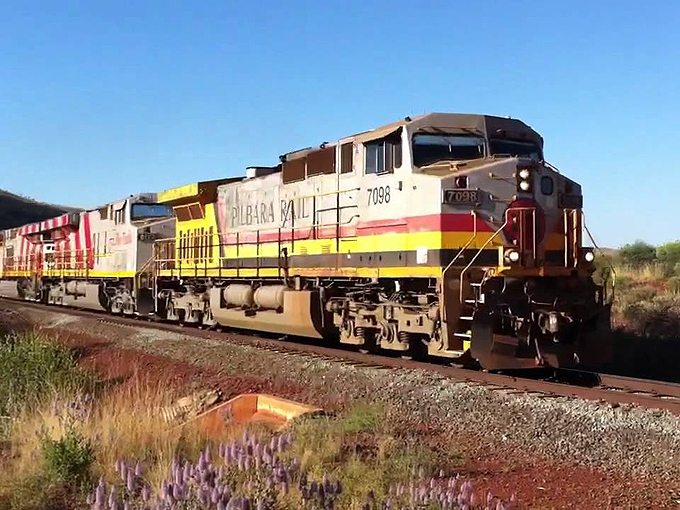 Improvements to system performance continue, and reports suggest that Rio Tinto anticipates 100% of its network will be fully driverless by the end of 2018. Rio Tinto says that, when completed and fully operational, AutoHaul will be the world’s first fully-autonomous, heavy-haul, long-distance freight railroad.

Rio Tinto first floated the concept in 2008, but has previously reported a number of delays in implementing the technology. The company is investing in automation and other improvements to its heavy-haul lines in the Pilbara so that it can increase capacity without the need to purchase additional rolling stock.

AutoHaul is part of Rio Tinto’s Mine of the Future project, launched in 2008. The project also includes autonomous trucks and drilling. Testing of AutoHaul started in 2014, and throughout 2015, AutoHaul-fitted locomotives were tested on the network to evaluate onboard systems, signaling, safety mechanisms and communications with the Rio Tinto operations center in Perth. The center enables all the company’s mines, ports and rail systems to be operated from a single location.

Ansaldo STS* won a US$294.7 million contract for development and delivery of AutoHaul’s automated train management system in 2012. The contract included supply of a vital safety server for “safe and flexible management of train movements and an on-board driving module.” The system utilizes existing wayside infrastructure installed under a contract awarded under RAFA (Rio Tinto-Ansaldo STS Framework Agreement) in 2010. Rio Tinto has also invested in updated locomotive control systems that allow the introduction of ECP (electronically controlled pneumatic) braking. Ansaldo STS was awarded a US$48.16 million contract under RAFA in July 2012 to outfit the railroad’s GE Transportation locomotives.

Releasing its second quarter production results, the Rio Tinto says its Pilbara iron ore shipments reached 77.7 million tons in the second quarter, despite being impacted by an increase in its track maintenance program following poor weather in the first quarter.

Total volumes for 2017 are forecast to reach around 330 million tons, which takes into consideration first-half production and the additional track maintenance.

* While 51% owned by Hitachi Group, Ansaldo STS remains an independent company, listed on the Milan Stock Exchange. The CEO is Andy Barr. The Chairman is Alistair Dormer, who is also Group CEO of Hitachi Rail.