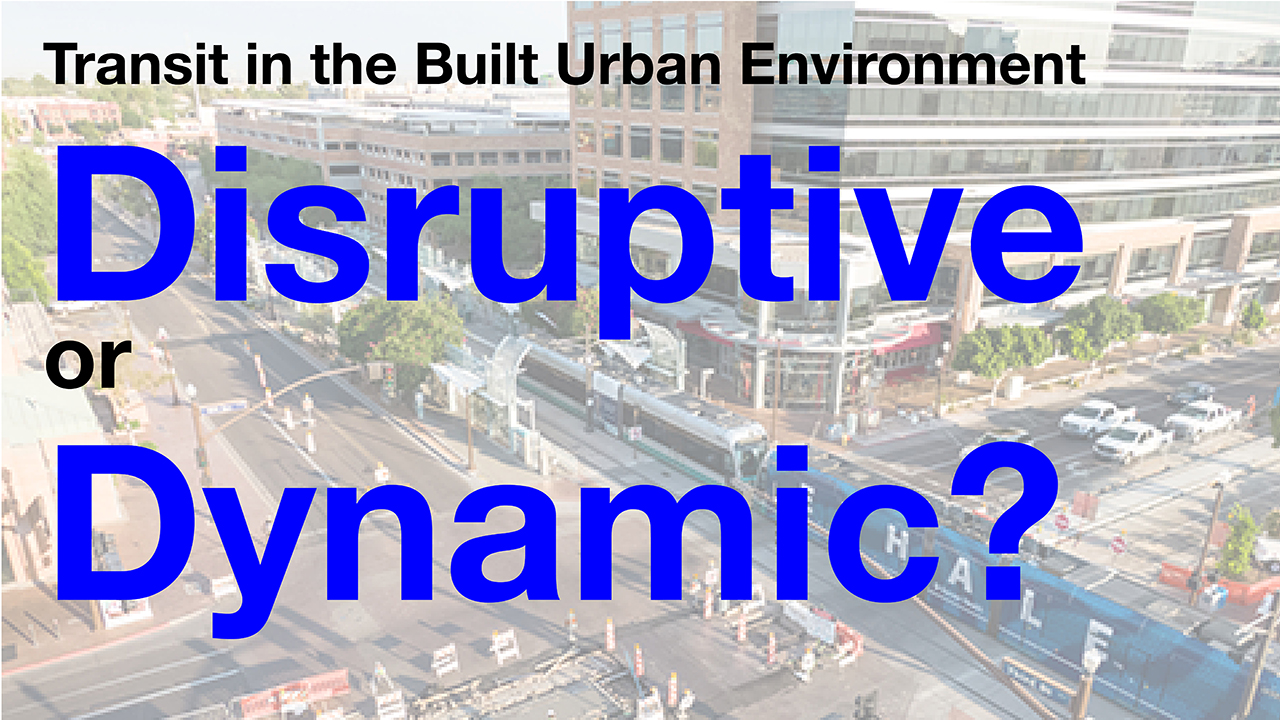 There is nothing new about unsolicited plans submitted by citizen-advocates, no matter how competent they may be, getting shot down or ignored by decision-makers.

I introduced you to such a plan in Part 1 of this series. If that were to happen in Salt Lake City, which appears likely, the result would be inconvenience for transit riders and a sub-optimal use of city space and resources.

It could be much worse in New York City, primarily because of the magnitude of the proposed project, in terms of both cost ($22 billion) and the amount of construction it would entail: 10 tall buildings in addition to whatever is done to augment and change the existing Penn Station.

There is a developing story in Manhattan, where a plan to redevelop the south end of Midtown around Penn Station (34th Street area) would change the character of the neighborhood dramatically. While it has been characterized as one of the largest real estate deals in the city’s modern history, its supporters are using purported improvements at Penn Station as a hook. The project they want implemented raises a number of issues, both about the transaction itself and about whether or not the claimed transit improvements upon which state officials are hanging their hats are actually needed. For that matter, it is also unclear whether the ten new skyscrapers at the heart of the project are actually needed.

On Wednesday, July 27, Stephen Nessen reported for WNYC and its companion news platform Gothamist that the project is moving forward with a recent approval (his Gothamist report can be found at https://gothamist.com/news/penn-station-project-gets-key-approval-by-ny-state-board-moves-to-next-phase). A major redevelopment project in the Penn Station area, at the southwest corner of Midtown Manhattan, was first proposed by former Gov. Andrew Cuomo, who came from Queens and was familiar with the subway system and with Penn Station. Incumbent Gov. Kathy Hochul hails from Buffalo and essentially kept the Cuomo proposal intact, making only a few minor cuts. Currently, the project is making its way through the complicated labyrinth of New York State politics.

Nessen and political reporter Jon Campbell reported in Gothamist that the project would cost $22 billion: “The Public Authorities Control Board (PACB)—an obscure State board that sank former Gov. Andrew Cuomo’s Amazon project—was charged Wednesday with approving the way the Penn Station project would be funded. A two-page sheet published a day before the vote noted it would rely on 50% federal funds, with New York and New Jersey evenly splitting the rest of the costs. Along with Penn Station’s revitalization, which is expected to cost $7.2 billion alone, the plans will see the construction of 10 skyscrapers around Midtown and the creation of eight acres of open space. The state is calling it one of the biggest projects in city history … Part of the financing plan will involve charging developers of the 10 skyscrapers, mainly Vornado Realty Corp., a fee instead of collecting city real estate taxes, a financing arrangement known as Payments In Lieu of Taxes (PILOTs). Mayor Eric Adams has previously said he’s on board with the arrangement.”

The two-page financial fact sheet can be found at https://esd.ny.gov/sites/default/files/Penn-Cost-Shares-07242022-2.pdf. It is considered a “draft” and bears the date of July 24. It provides some useful information, but not a complete breakdown of sources, uses, and amounts of money that comprise the overall $22 billion cost of the entire proposed project. Plans call for $7 billion to be spend on “Penn Reconstruction”; $13 billion on “Penn Expansion” (a “Penn-South” type of project); $500 million on “Public Realm Improvements” (presumably green spaces and the like); and $1.5 billion (6.8% of the total) on unspecified “transit improvements.”

Breaking down who would pay, New York State would pay the $2 billion for the Public Realm and Transit Improvements (PRTI), while $10 billion, or 50% of the remaining $20 billion, would come from Federal sources. New York State and New Jersey would each contribute 25%, or $5 billion. The PILOT would pay for the PRTI and 12.5% of the cost of the Penn Station Reconstruction and Expansion, half of the New York State share. Nessen reported that the PILOT payments would go directly to the State toward the project, instead of to the City in real estate taxes. Mayor Eric Adams is on board with the proposed project, despite the loss of tax revenue.

With COVID-19 still on the loose and still affecting the City, it is unclear that assessed values will grow at 3% or more annually. The discount rate of 6.25% also appears questionable, since inflation is now exceeding that rate. Unless inflation calms down substantially and soon, construction money may end up being significantly more expensive than the project’s promoters expect.

Not All Politicians On Board

According to Nessen and Campbell, “The approval of the PILOT funding comes despite the board not having an exact figure for how much in fees the developers would pay.” They also reported: “State Sens. Brad Hoylman, Liz Krueger, and Robert Jackson—who have been critical of the plan—put out a joint statement suggesting the fight for a fair deal continues. What today’s vote did not do was establish any deals with any real estate developers for the blocks surrounding Penn Station. Any future deals will have to return to the PACB, and I will continue fighting alongside the community to ensure that those deals are not just corporate welfare for developers.”

Sen. Leroy Comrie of Queens, a Board member, expressed concern about future funding, but voted to approve the project anyway. Nessen and Campbell reported: “Comrie added that he would still like to see the refurbished Penn Station allow the LIRR and NJ Transit trains to share tracks as they pass through. The Empire State Development Corporation—the authority currently overseeing the project—has rejected this idea in the past.”

Watchdog Barks Out a Warning

Non-politicians have expressed concern, though, and they have made their opposition known. Nessen and Campbell reported that watchdog group Reinvent Albany said: “Instead of voting on an actual financing plan with actual dollars, the PACB chose to ‘approve’ a non-binding framework agreement that includes no dollar figures. Under the law, it is not the PACB’s job to approve non-binding framework agreements. So what does this vote mean and why did they do it?” John Kaehny, Executive Director of Reinvent Albany, said in a written statement, “I think this vote means nothing legally, but a lot politically. The Senate and Assembly think they’ve created a fig leaf for themselves to placate the growing legions of critics while delivering the governor the headline she wants: ‘Deal Approved.’”

Reinvent Albany’s report was prepared by Bridget Fisher and Flávia Leite of the Schwartz Center for Economic Policy Research at the New School (it can be found at https://reinventalbany.org/wp-content/uploads/2022/07/Reinvent-Albany_SCEPA-Penn-Station-Redevelopment-Report-2022-July-12.pdf?mc_cid=7d4a29f427&mc_eid=4ae68653c6). It was released on July 12 and warned that a PILOT discounted by 20% would give Vornado a tax break worth $1.2 billion and that, at best, Vornado’s PILOTs would only finance 55% of New York’s share of the costs: “ESD [Empire State Development Corp.] estimates the State share of all Penn Station projects at $7.5 to $10 billion (Gateway, Penn expansion and reconstruction of Penn Station). Given $4.1 billion in commercial PILOT-supported financing, New York State needs $3.4 to $5.9 billion of funding from other sources. The FY 2023 state budget includes $1.3 billion for below-ground improvements.” The study claimed that the $1.2 billion in tax breaks and the additional $1.3 billion needed to refund currently lost tax revenue to the City could end up creating a funding gap of $3.4 to $5.9 billion (at 3-4).

Nessen and David Cruz reported on the Reinvent Albany report on July 13 in Gothamist and on WNYC (found at https://gothamist.com/news/ny-taxpayers-might-ultimately-be-on-the-hook-to-fund-penn-station-project): “With the state providing few details on the project’s financing plan, economists applied a similar model used to fund the Hudson Yards project. There, revenue for the project was funded through so-called payments in lieu of taxes (PILOTs), with an additional 20% tax discount. Applying that formula to the Penn Station project, economists found the deal would ultimately generate $4.1 billion, not $10 billion, while providing a $1.2 billion tax break, mainly to developer Vornado Realty Inc. The firm will build the majority of new buildings surrounding Penn Station … With such a shortfall, economists say the State will have to look for upwards of $5.9 billion from other sources, including State-backed loans that would ultimately be bankrolled by taxpayers.”

Opponents of the project demonstrated in Albany, as Nessen and Campbell reported: “Damina Townes of Lower Manhattan was among those who traveled to Albany for the rally. She said the redevelopment project is too-focused on building office towers and not focused enough on the public transit and preservation needs of the surrounding neighborhood. ’I’m saying office towers are not necessary in that area,’ she said. ‘If I want this Penn Station project to be about Penn Station, that should be the main focus.’ … Layla Law-Gisiko, who sits on the executive committee of Manhattan’s Community Board 5, said she was frustrated by the ‘very vague framework’ the PACB voted on, leaving her questioning whether the state is serious about fixing Penn Station. ‘I think we’re getting misguided in the way we’re setting our priorities,’ said Law-Gisiko, a former Assembly candidate. ‘I need to figure out how we’re going to pay for the construction and potential expansion of Penn Station. then I can think about 10 towers. And very clearly, I heard today that they make absolutely no commitment that these towers are going to provide any revenue.’ She continued: ‘What are I doing? Why are I wasting our time?’” There will be more PCAB votes on the proposed project in the future.

It is too early to tell if the opposition will become strong enough to kill the project, or even to force changes that will reduce its magnitude. There are questions about whether it will be worth the cost, and whether it makes good transit sense, considering that its purpose is to add infrastructure to Penn Station and to build a number of new high-rise office buildings in the Midtown area. A recent trend has been a reduction in the number of office workers who now commute on traditional five-day schedules for a morning arrival at the office. Does New York need more offices for a lower number of workers and more tracks to get fewer commuters there? I will examine these issues in Part 3 of this series.