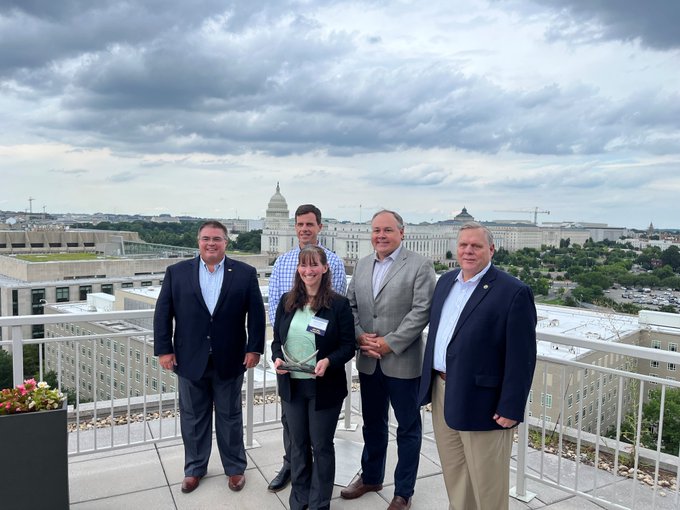 The Association of American Railroads (AAR) announced on July 27 that it has named Norfolk Southern (NS) Director of Fuel Efficiency Jamie Helmer as recipient of the 2022 John H. Chafee Environmental Excellence Award.

The annual award, which is named in honor of the late Rhode Island senator, a strong advocate for environmental causes and the eco-friendly benefits of rail transportation, recognizes a railroad employee who has “demonstrated the highest level of environmental stewardship in the previous year,” AAR says.

“Railroaders have always been the power that fuels our industry, and today we honor those pushing us toward an even more sustainable future,” said AAR President and CEO Ian Jefferies. “Our 2022 honoree, Jamie Helmer, has been a driving force behind NS’s innovative, top-to-bottom approach to reducing its footprint in the near-term and laying the groundwork for even greater advancements into the future. Congratulations to Jamie and all this year’s nominees whose passion and work is advancing environmental responsibility across the industry.”

According to NS, Helmer is “integral in driving key improvements in fuel sourcing, efficiency and conversions that move the railroad closer to its science-based target of reducing emissions intensity 42% by 2034.” Under her guidance, NS has experienced a 7% improvement in fuel efficiency, saving approximately 47 million gallons of fuel and avoiding more than 470,000 metric tons of greenhouse gas emissions in the last two years, according to NS.

Part of NS’s efforts to reduce its carbon footprint include analyzing different fuel alternatives and low-carbon fuels and the long-term planning of the future locomotive energy source in place of ultra-low sulfur diesel. In May 2022, Helmer and a team from the sourcing, mechanical and fuel planning departments introduced biofuel at a major NS fueling location that, according to the railroad, is anticipated to increase the overall amount of biofuel used in 2022 up to millions of gallons annually.

In addition to Helmer, seven other railroaders were nominated for the 2022 John H. Chafee Award. Below are brief descriptions of the nominees.

Fernandez is currently working with CN’s environmental department to improve the stormwater management system for the facility communications building by incorporating native practices, naturalized sedimentation basins and overall native plantings. Implementing these types of naturalized systems, CN says, will aid not only in improved, reliable stormwater management and control, but also stormwater quality by helping to reduce sediment loading into a nearby trout stream. Fernandez has also worked to improve the quality of lighting at many CN facilities by installing fluorescent T-5 style fixtures. The T-5 fixture high bay lights use less wattage and more lumens than the historical high pressure sodium style lighting.

While recently reviewing the railroad’s yard air handling systems, Kosla discovered that most of the systems were inefficiently designed and proposed a new system to CSX leaders that was ultimately adopted. A study determined that Kosla’s new systems have increased reliability and performance, reducing energy consumption by 30%, according to CSX. Specifically, the new systems are saving 5,600 megawatt-hour per year, translating in the avoidance of 3,920 tons of CO2 emissions on an annual basis. Kosla has also undertaken numerous projects to enhance waste management processes and mitigate potential spillage at CSX facilities.

For the past 13 years, Monroy has led the Patio Limpio (Clean Yard) Program, which “fosters a culture of caring and respect for the environment within and around the 3,300-mile rail network,” according to KCSM. Each month at a different location on the KCSM network, the Social Responsibility team convenes volunteers to spend time picking up trash, debris and recyclable material from the rail yard. The Patio Limpio program, the railroad says, has had great results, allowing the company to keep the railroad tracks, yards and right-of-way (ROW) clean; improve and enhance coexistence of the railway and communities; adopt an environmental culture within the railroad; and enhance fellowship amongst employees.

Rodriguez’s commitment to the environment and sustainability efforts has instilled a “culture of ownership and innovative solutions within his workforce,” BNSF says. His leadership skills have empowered his crews to implement various cost-effective waste minimization programs, such as the recycling of used oil, cardboard, scrap metal and wooden pallets. BNSF initiated a Sustainable Operations pilot test at the Barstow, Calif., facility where Rodriguez works based on Rodriguez’s longstanding environmental stewardship. As the facility lead, Rodriguez and his team have implemented multiple sustainable initiatives, including a closed-loop borate recycling program that reduces waste and encourages reuse; locomotive used oil recovery system so used oil can be sold to a local third-party for fuel use; and material management process to ensure that new materials are approved and used materials are recycled.