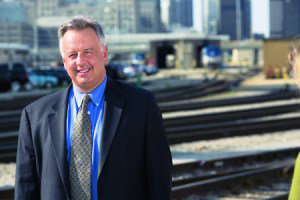 The federal-state partnership to build 130 modern bi-level passenger rail coaches for higher-speed rail (HrSR) corridors in the states of California, Illinois, Michigan and Missouri under the 2008 PRIIA legislation “was doomed from the start,” according to James E. Coston, Chairman of Corridor Capital LLC.

PRIIA required the cars to be built entirely in the U.S. with domestically sourced components and materials. They are required to be completed by September 2017. Missing the deadline would result in any unspent funds being redirected by the federal government. But carbuilder Nippon Sharyo USA Inc. suspended construction of the vehicles late last year after carbodies failed three successive compression tests and were thus deemed non-compliant with U.S. crashworthiness standards.

“The story published in the April 11, 2016 Wall Street Journal  detailing Nippon Sharyo’s Next Generation bi-level railcar procurement will shock most readers: Public agencies working with foreign-owned railcar manufacturers were unable to build a new design of passenger coach in the United States.

“Under the 2008 PRIIA legislation, the Federal Railroad Administration, in conjunction with several states receiving federal stimulus grants to provide modern, 125-mph-capable trainsets, was heralded as a very big step in transforming state rail corridor routes into commercially viable enterprises. Those of us on the Section 305 Next Generation Equipment Committee joked about “building a camel by committee.” But, as the WSJ story reveals, that was not the real problem. The history of public policy decisions and manufacturing industry culture issues for more than a decade provide greater insight to how and why Nippon Sharyo has been unable to produce an acceptable railcar. Ominous signals were present when the invitations to bid were issued, and it never got better as things progressed.

“The unfortunate details can be chronicled in a more thorough post-mortem. The entire process and the rules governing these procurements need to be reexamined and re-crafted to reflect the realities of creating new rail vehicles for the U.S. market. Not to be cruel, but adult supervision—which likely means accessing resources and experience from the private sector in the actual decision-making process—is clearly a necessity for a successful build.

“The more immediate problem is the one facing states that expected to have new trains delivered—starting this year—to operate on their upgraded corridor routes. One of the more disturbing elements of this manufacturing failure is that even while the procurement headed into a downward spiral, there was little or no discussion of either the gravity of the failure or “Plan B” options for these state DOTs to consider. Other manufacturers—as well as companies such as Corridor Capital that have had suitable equipment available for interim service or to augment the Next Gen fleet—were effectively blocked from being considered as alternatives.

“The development of improved and expanded passenger train corridors in this country needs to be made a higher national priority. It needs to be guided by serious, qualified people who can get the job done—by professionals, engineers and procurement specialists. And, that means people who can resist the lure of a suspiciously low bid and the promise of a new factory.”