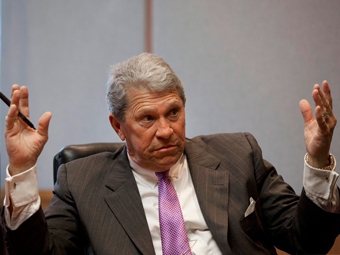 More than 80% of respondents to a CSX Service Quality survey issued by Cowen and Company say they have experienced service issues since the company initiated President and CEO Hunter Harrison’s Precision Railroading. According to Cowen Managing Director and Railway Age Wall Street Contributing Editor Jason Seidl, “nearly 40% [of respondents] have switched some freight to Norfolk Southern, and 67% have transferred freight to a trucker.”

This could lead to NS showing additional market share gains in this year’s third quarter, Seidl noted, adding that NS’s EPS (earnings per share) could increase by 5% in this year’s second half should NS manage to grab 5% of CSX’s traffic within that time period.

“Shippers are moving or have already moved freight off CSX where they can,” Seidl said. “In light of this trend and the STB’s recent letter to CSX management, on July 31, Harrison sent an email letter to customers addressing concerns and committing to improve the problems.”

“Our view is that NS could meaningfully benefit from the service-related issues at CSX over the next couple of quarters,” Seidl said. “We continue to like the stock and see NS achieving its sub-65 OR (operating ratio) goal before 2020. NS should also have an easier time raising prices over the near-term as we think shippers would be willing to accept them for reliable service.”

Seild said that Hub Group, among the railroad industry’s largest intermodal customers, “was outspoken about the quality of Norfolk Southern’s intermodal service on its 2Q17 earnings call. Perhaps this was management just pushing their own book, but nevertheless they can be respectfully vocal when service is not to their liking.”

However, from a more-positive, longer-term perspective, “We also think CSX’s issues are transitory,” Seidl added. “While it is painful for many shippers today, we expect that over the next 12-18 months CSX customers will be more pleased with the railroad’s service quality. We do not think volumes that are lost to NS or a trucker during this transition period will be permanently lost.”

“CSX is making excellent progress in the transition to precision scheduled railroading,” spokesman Rob Doolittle told Railway Age. “The change is not without a few bumps along the way, and we have acknowledged that with customers and are working to address individual service issues as they emerge. As Hunter Harrison said in a blog post on Railwayage.com last week, ‘The majority of our customers, employees and shareholders are excited and fully engaged in what they see as a step-change improvement in what it means to run an efficient, cost-effective railroad. They understand that through the service improvements we’re making, we’re positioning ourselves to regain much of the freight volume that was lost to trucks over the past 40 years and drive top-line growth that will reward our shareholders and employees for decades to come.’”

“In the company’s second-quarter financial results, announced on July 23, we were pleased to report that our business volume had increased in the quarter when compared to a year ago,” Doolittle noted. “Ultimately precision scheduled railroading is about better service to customers and we expect, as your analyst [Jason Seidl] does, that CSX customers will happier with the service quality we are able to deliver as the transition is completed.”

Following are several comments from CSX customers who responded to Cowen’s survey. Save for one intermodal customer who said service has experienced no significant impacts, all are negative.

• “This transition has been a complete disaster in regards to CSXT’s operational service. Car velocity has drastically declined, putting our ability to serve our customers and maintain empty supply to our plants in serious jeopardy. When cars do move, they are often misrouted just to avoid dwell in the terminal and at times get lost as a result, which just exacerbates the velocity issue. Service from Norfolk [Southern] has remained steady.”

• “Service tanked in the Atlanta region in early March, running us out of raw materials at plants and empties for our vendors, with transit times doubling to tripling. Other lanes have since been affected, with extremely slow and erratic transit times, doubling in some cases. Cars go way out of route frequently. Cars ping pong between distant terminals for weeks, passing our plants before finally getting placed, [more than] two weeks late in many instances.”

• “Many customers are competing to locate trucks as demand is up as CSX is [causing] many businesses [to be] short of raw materials. We have switched several hundred carloads of freight a year from CSX to NS and several hundred more [from] CSX to truck. We are looking at converting at least 500 carloads a year more from CSX to truck as we work out the logistical issues. We are starting up a plant in the Northeast in 2018, good for about 250 carloads a year, and are negotiating with NS for that and will not even ask CSX for rates. Wish we could pull every pound of freight off CSX if we could. This ranks up there with the Union Pacific 1998 service meltdown, post-Southern Pacific merger, and the NS-CSX mess after the Conrail split in 1999.” • “[S]ervice has been cut and reliability is a thing of the past. The few employees who are left are overwhelmed with work. Safety has taken a backseat to earnings per share.”

• “We ship mainly unit trains with CSX, and we’ve seen cars sit in switching yards due to lack of power [or] people. or congestion.” • “Other railroads [are] telling us to avoid certain interchanges, which takes our costs up. [There is} an overload of bulk trucking [to get] around CSX to keep customers running, stressing the capacity of trucking companies.”

• “We have three automotive customers that are [captive to] CSX. NS is unable to help due to a haulage agreement between the two. Due to the fact that CSX cannot supply the necessary cars for these locations and NS cannot supply cars due to the haulage agreement, we are moving this material by truck. These are JIT (just-in-time) customers, so any delays turn critical. We have the option to do a group rate with CSX/NS, but that more than doubles the rate into those locations. [This] makes truck a better mode of transportation.”

• “Transit times vary from one to three weeks. [We] have been on the brink of shutdown a couple of times due to lack of raw materials. Compounding the problem has been a lack of transparency on the part of CSX. If we know there will be delays, we can plan accordingly. They are unable/unwilling to provide us any kind of forecast on transit times. We are considering alternative means of transportation for this location, [perhaps a] barge/truck combo or via NS.”

• “Truly awful! [CSX] could not have done a better job designing the worst possible service model. On most days, we do not get a switch, even though we are scheduled for five a week. After begging, we might get one. However, we do not get the correct number of cars or even the right car numbers. This is what happens when you place shareholder value ahead of customer success. I hope [CSX shareholders are happy. We aren’t.”

• “Service has declined to the point that it appears CSX is trying to drive my plant out of business. I have missed customer orders and been forced to idle my plant numerous times due to failure to get service. The only answers we get are basically, ‘That’s tough. Get used to it.’ The situation is untenable, and I am actively looking to switch my business elsewhere wherever possible, as soon as possible.”

• “[CSX] customer service doesn’t have solutions for the service interruptions, and you get a different story from whomever you’re talking to at CSX. They have taken away tools that help the customer operate, such as diversions without interacting with CSX personnel. Everybody you talk to at CSX is scared [that] they will get fired if they help the customer with a solution that [doesn’t follow] the Precision Railroading business model.”

• “In the past two months, we have lost our account rep in Customer Service, who was amazing, and [was] replaced with people who do not help me at all and give me a bad attitude when I am trying to get some resolution to my issues. I am very upset with the new CSX, [which] does not seem to care at all about customers.”

• “Communication has been awful for new rollouts. Changes affecting normal protocol for routing and diversions have been affected. Transit times have been unpredictable, making it hard to manage a fleet and be right-sized. We are looking at moving volume over to [NS] where we can, until CSX can get a grasp on operations.”

• “The CSX transition is not an off-and-on switch. The choices and changes that have occurred in the past six months will not be fully noticeable for at least another six months in the Northeast. Weather will play a huge role in the Selkirk hump yard to flat-switch [change] as 85-degree weather vs. three feet of snow will hamper that play …We will respect the CSX changes, but will continue to keep doors open for other opportunities and reinventing the wheel to accomplish our own customer service needs to ship a great product and serve our customer base in a cost-efficient matter for our company. Time will tell if ‘Precision Railroading’ will work for the future of CSX, as the U.S. Northeast is different in Canada, as well as the rules and regulations that are built within the AAR and STB, and in Washington D.C.”

• “The customer service support that is left can’t provide any kind of substantive information due to lack of experience in [the] yard system. Where is the field leadership? Where is the attention to customer needs? What happened to providing better service to the customer? There’s more to running a railroad than cutting costs to make your bottom line look better. While I haven’t transitioned any of my business yet, that doesn’t mean that I can’t or won’t.”

• [W]e have had specific cars sit in one CSX yard for as long as 13 days before finally being moved. We have had one major customer on the verge of a shutdown because of delays in receiving shipments that appear to be the result of either circuitous routing or multiple delays at various yards enroute.”

• “Delays are costing us thousand of dollars in idle lease rent and causing us to reduce production due to lack of empties to reload. We are also having to ship trucks to avoid customer shutdown.”