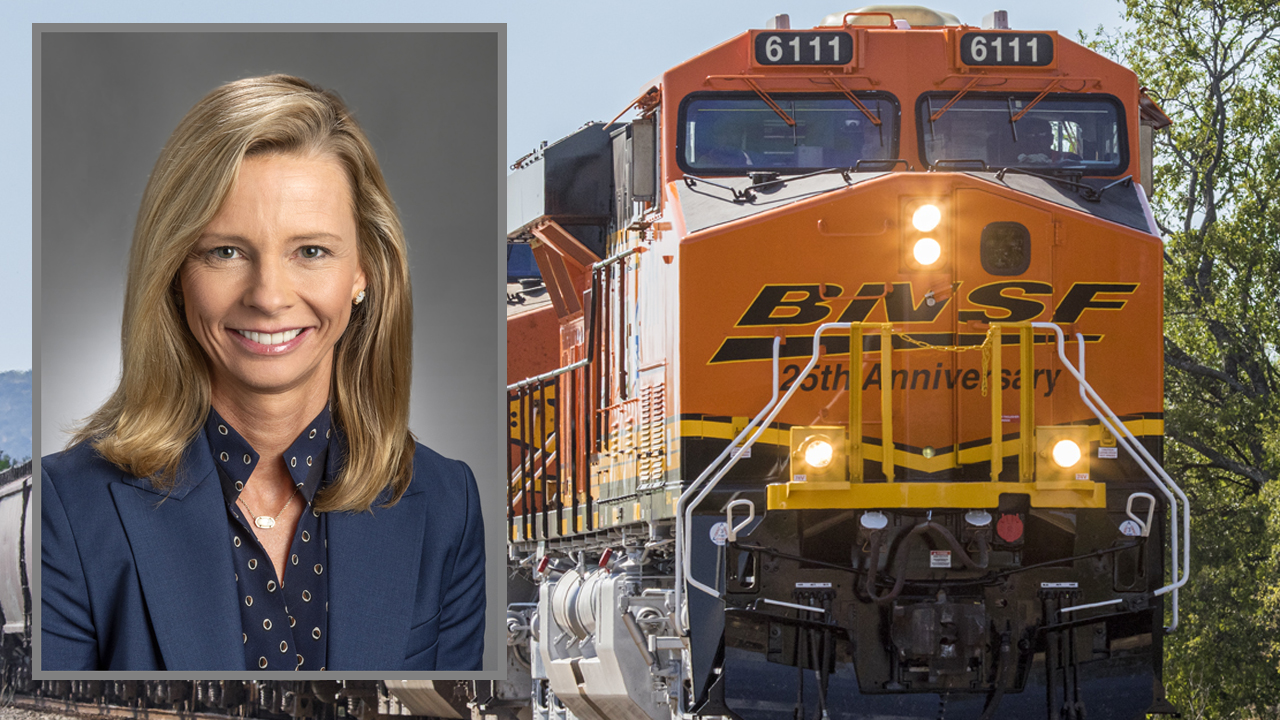 For the first time in the nearly 200-year-old history of North American railroading, a woman has been named chief executive of a Class I railroad. On Jan. 1, 2021, BNSF Executive Vice President Operations Kathryn M. “Katie” Farmer will succeed Carl R. Ice as President and Chief Executive Officer. She will also assume leadership of BNSF’s Board of Directors. Ice will retire at the end of 2020 and remain on the company’s board.

Farmer, Executive Vice President Operations since September 2018, has spent her entire 28-year railroading career with BNSF, joining predecessor Burlington Northern as a 22-year-old management trainee in 1992. She has held leadership positions in every major function of the company including operations, marketing and finance. Prior to EVP Operations, Farmer was VP Service Design and Transportation Support, Group VP Consumer Products, VP Domestic Intermodal and VP Industrial Products.

Farmer graduated from Texas Christian University – M.J. Neeley School of Business with a Bachelor of Business Administration (BBA), and earned an MBA in Finance from TCU.

Carl Ice has been with BNSF for 42 years. In 1995, he led a team that orchestrated the merger and subsequent integration of Burlington Northern Railroad and Santa Fe Railway. “Since then, he has helped lead the company and culture into what has become the largest Class I railroad in North America,” BNSF noted “Ice has been integral to the development of the company’s operating and marketing plans.” Railway Age named him 2016 Railroader of the Year.

“I want to thank all of the men and women of BNSF,” said Ice. “I am proud of having worked with you and all of things that we have accomplished together. One of the most important roles of a CEO is to ensure a strong succession plan is in place. Katie and I have been working toward this plan for a long time. She has held many different roles at BNSF with an ever-increasing impact with each new role as she has built trust and confidence throughout BNSF. I am pleased for Katie and the organization, knowing BNSF’s future is in good hands. Katie is a shining example of BNSF’s leadership model and BNSF will continue to build upon its legacy.”

“I am humbled and honored to be asked to lead this incredible company and its dedicated employees—men and women that I have worked alongside for almost 30 years,” Farmer said. “We are well-positioned in our approach to safety and meeting our customers’ expectations while having the necessary capacity to grow with our customers. BNSF has long been a cost leader, and we will ensure that continues into the future. I look forward to continuing BNSF’s success.”

“Carl has had a huge impact on this company and this industry, having served on BNSF’s leadership team for the entire 25 years of the company’s existence,” said Greg Abel, Vice Chairman Non-Insurance Operations of Berkshire Hathaway, BNSF’s parent company. “I have great respect for him, and he leaves BNSF well-prepared for the next 25 years. Katie has had a long career with multiple roles at BNSF, which fits well with our efforts to develop our people. Her proven leadership and passion and commitment make her perfect for the role. We’re thrilled that Katie is taking over the role and have the utmost confidence in both her and BNSF’s future success.”

Berkshire Hathaway Chairman and CEO Warren Buffett said, “BNSF is an iconic company and this is a historic day. Carl has been critical to BNSF’s success for a very long time. I thank him for his leadership and his accomplishments. We look forward to Katie’s leadership and more success. She possesses all of the qualities that make us excited about the future.”

With her appointment, Farmer will become one of the highest ranking women at Berkshire Hathaway, which in addition to a Class I railroad includes companies in insurance, utilities, industrial manufacturing, retail and automotive. Berkshire’s Ben Bridge Jeweler, Fruit of the Loom and General Re have women as chief executives.

Igoe joined the railroad in 1998 as a management trainee following a career as a U.S. Army officer. He has held multiple positions of increasing responsibility in operations and marketing. Igoe served as General Manager of BNSF’s Chicago Division from May 2010 until October 2012, when he assumed the role of General Superintendent Transportation before being promoted to Vice President Central Region in February 2013. He served as VP Service Design and Performance beginning May 2016 before being named to his current role.

In his new role, Igoe will report to Katie Farmer. “Matt’s deep experience in operations has him well-prepared for this role,” said Farmer. “We look forward to his proven leadership and contributions to improve upon safety, productivity and delivering a superior service product to our customers.”

“Matt has been preparing for this job his entire life,” said Carl Ice “He has demonstrated his leadership abilities in many roles over his career, and brings a strong commitment and understanding of our company and operations that will serve BNSF well in the years to come.”

Farmer’s historic ascendance to BNSF’s top post occurs as the Class I marks its 25th anniversary. Creation of BNSF began with the Sept. 22, 1995 formation of a holding company that purchased the Atchison, Topeka & Santa Fe Railway and Burlington Northern Railroad, formally merging them into the Burlington Northern & Santa Fe Railway on Dec. 31, 1996. On Jan. 24, 2005, the railroad’s name officially changed to BNSF Railway Company, using the initials of its original name.