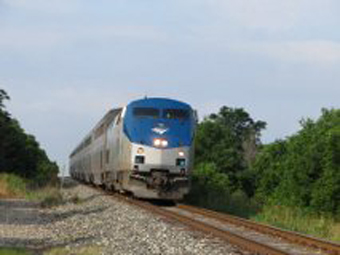 What a fascinating October this has been for Amtrak.

On the plus side:

• Amtrak had a green board to operate its passenger trains despite the federal government shutdown.

• Amtrak has now reached agreement with all 19 affected states for 100% operating-cost reimbursement on 27 intrastate routes for which Congress eliminated federal funding.

• A poll of voters residing in some of America’s most conservative congressional districts revealed unexpectedly sturdy support for continued federal funding of long-distance passenger trains operated by Amtrak.

Far less positive was an Oct. 11 federal appeals court decision to let stand an earlier ruling invalidating, as unconstitutional, an attempt by the Federal Railroad Administration (FRA) and Amtrak to establish jointly the metrics and minimum standards for measuring Amtrak passenger train performance and service quality when Amtrak trains travel on freight-railroad-owned track. The decision, if not appealed to, and reversed by, the Supreme Court (both highly unlikely, with the latter even more doubtful), eradicates a consequential cudgel to keep long-distance passenger trains on schedule.

In the 2008 Passenger Rail Investment and Improvement Act (PRIIA), Congress provided that if host freight railroads failed to meet an 80% on-time performance standard for Amtrak passenger train in two consecutive quarters, then Amtrak, or a state that subsidizes Amtrak service, or a connecting host freight railroad, may ask the Surface Transportation Board (STB) to determine if the delays are caused by the failure of a host freight railroad to provide preference—also required by law—to Amtrak passenger trains. If the STB then determines the host railroad is at fault, it has authority to impose hefty fines, payable to Amtrak, and to prescribe a remedy.

For sure, on-time arrivals have vexed Amtrak since its inception, notwithstanding a 1973 congressional directive that host freight railroads provide priority dispatching for Amtrak passenger trains traversing freight-railroad-owned track. Competing brickbats alleging responsibility for Amtrak delays have been many, but the evidence is habitually muddled, as a there can be a multitude of reasons—many beyond the control of a host freight railroad—for a passenger train to arrive beyond its scheduled time.

Thus, Congress included in the PRIIA a provision that the FRA and Amtrak—in consultation with the STB, freight railroads, states, rail labor, and rail passenger organizations—develop metrics and standards for measuring Amtrak passenger train performance and service quality, such as defining how many minutes beyond scheduled arrival time should be considered “late,” how those minutes should be determined relative to miles travelled, and what should be considered circumstances beyond the control of host freight railroads.

Freight railroads challenged in federal court the provision of the PRIIA relating to determination of metrics and standards, asserting Amtrak’s involvement in their creation was an unconstitutional delegation of lawmaking and rulemaking. Amtrak, asserted freight railroads, is not a government entity, but rather was created by Congress to operate and be managed as a for-profit corporation, and is a “financially interested private party that stands to directly benefit from violations of the rules it created” in concert with the FRA.

A federal district court dismissed the freight railroads’ challenge, but the freights appealed, and a three-judge panel of the U.S. Court of Appeals for the D.C. Circuit reversed the lower court. On Oct. 11, the same court declined to have that three-judge ruling reviewed by the entire court. (As an aside, it is interesting that the FRA never published the jointly created metrics and standards in the Federal Register, as is typically done in rulemakings, but rather published them on its website.)

Thus, barring an unlikely successful appeal to the Supreme Court, the joint FRA/Amtrak established metrics and standards intended to define “on-time” performance are kaput, leaving the STB or Congress to determine how on-time performance—affected by a myriad of circumstances such as terrain, weather, track maintenance, and congestion, as well as actions and deficiencies of Amtrak—shall be defined and enforced.

A freight railroad attorney involved in the dispute, and requesting anonymity, says even if the FRA unilaterally had established the metrics and standards they would be “unlawful, as the FRA has no legal authority over passenger rail, except for safety.”

Many advocates for additional Amtrak trains that would traverse new routes share with freight railroads concern over a requirement for an 80% on-time passenger train arrival requirement. An example is a recent joint Kansas DOT/Amtrak request that BNSF use computer modelling to determine the feasibility of a state-sponsored 606-mile passenger train route linking Kansas City, Oklahoma City, and Ft. Worth.

The model, using Rail Traffic Controller software, was set to achieve 100% on-time performance for passenger trains, with no impact on freight operations. The predicted $400 million cost was deemed prohibitive—and significantly greater than if BNSF did not face the possibility of major fines for failure to achieve 80% on-time dispatching for the passenger trains. Said a rail official, asking his name not be used, “PRIIA added a great deal of risk for the host railroad in the possibility of open-ended fines. If you get rid of this risk, the freight railroad will be much more accommodating.”

Congress is attempting to craft a new PRIIA this session. Good luck, because even Republicans in the Republican-controlled House can’t agree on Amtrak issues, with the conservative wing seeking Amtrak’s demise and the moderates supportive. This conflict is most evident in attempts to write Amtrak funding legislation for fiscal-year 2014.

When a proposed 21% Amtrak subsidy cut (from the FY 2013 appropriation)—with zero funding for high speed rail—exited the House Appropriations Committee, the Republican leadership pulled the bill from the House floor over uncertainty there were enough Republican votes to pass the bill. As one House Democrat observed, “Republicans created cuts [to Amtrak that] even Republicans could not stomach.” A bill in the Democratic controlled Senate would give Amtrak $1.45 billion for FY 2014—some 1% above its fiscal-2013 subsidy—plus $100 million for high speed rail.

Despite the federal government shutdown, Amtrak remained in operation, as Congress, in creating Amtrak four decades ago, provided it is not a department, agency, or instrumentality of the U.S. Government. This means Amtrak is not subject to the Anti-Deficiency Act, which prevents agencies of the federal government (such as the FRA, STB, National Transportation Safety Board, and National Mediation Board) from incurring non-essential related obligations or expending money in the absence of an approved federal budget, which is why the shutdown occurred prior to the start of a new fiscal year Oct. 1.

So long as Amtrak has cash on hand from ticket revenue, it may operate during a government shutdown—as does the Railroad Retirement Board, whose funds are derived from payroll taxes and a trust fund and not a federal budget appropriation.

No doubt many conservatives in Congress, working assiduously to starve Amtrak of new federal funding, would have preferred Amtrak to shut down. Amtrak is as much a target of conservative lawmakers as is the Affordable Care Act, Medicaid, Medicare, and Social Security—owing not to Amtrak’s role in transporting passengers, but as part of a large federal government footprint that conservatives and libertarians want to shrink.

Thus it is a probable comeuppance to conservative congressional critics of Amtrak federal subsidies that a majority of their constituents—and in far larger numbers than likely assumed—support continued federal funding for Amtrak. Since Amtrak’s inception, polls have registered voter support for federally supported intercity passenger trains, but an October poll stands out as unique, as it focused on some of the most conservative congressional districts in America.

• In a Kansas congressional district represented by Republican and Tea Party caucus member Tim Huelskamp (he ran unopposed in 2012), 57% of those polled in a random sample support retention of the current subsidy level, and another almost one-in-five favor increasing the subsidy.

• In a Colorado congressional district represented by Republican Cory Gardner, elected with Tea Party support (59% of the vote in 2012), 43% of those polled in a random sample support retention of the current subsidy level, and another 20% favor increasing the subsidy.

• In an Indiana congressional district represented by Republican and Tea Party favorite Todd Rokita (62% of the vote in 2012), 57% of those polled in a random sample support retention of the current subsidy level, and another 16% favor increasing the subsidy.

• In a Missouri congressional district represented by Republican Jason Smith (he won a special election in June with Tea Party support), 47% of those polled in a random sample support retention of the current subsidy level, and another 15% favor increasing the subsidy.

Although the poll was funded by the United Transportation Union, the pollster, Dean Mitchell of DFM Research in St. Paul, earned a master’s degree in public policy from the University of Minnesota, and utilized an independent call center to assure a statistically valid random sample in the selected congressional districts.

In the final piece of October good news for Amtrak, it has reached agreement with 1all 19 states for them to provide 100% of the operating subsidy to keep 27 intrastate passenger trains (outside the Northeast Corridor) operating on routes of 750 miles or fewer.

The PRIIA provided that by October, states must pay 100% of the operating subsidy for those corridor passenger trains. States may still apply for federal funding to cover up to 85% of the capital cost improvements to those routes. Amtrak alone has statutory authority to operate those corridor trains, which provide Amtrak with some 50% of its annual passenger count. Amtrak long-distance routes are not affected.