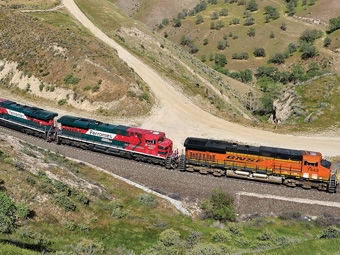 BNSF Railway and Ferromex (FXE) announced a new intermodal service between Chicago and Silao, Guanajuato, Mexico, on Tuesday, May 20, 2014.

BNSF and FXE hosted customers, intermodal carriers and elected officials during an opening event Tuesday to showcase the new service at the expanded FXE Silao Intermodal Facility inside the Inland Port of Guanajuato in Silao, Guanajuato. The new intermodal service, scheduled to launch on May 27, will provide customers with a reliable and a fast transportation option to move goods across the U.S.-Mexican border.

“Our partnership with Ferromex to launch this service from Chicago to Silao means that automakers and manufacturers in the U.S. and Mexico will now have direct access to the advantages of intermodal rail in the Bajio region,” said Steve Bobb, BNSF executive vice president and chief marketing officer. “This service offers Mexico’s fast growing manufacturing sector in the Bajio region a simple way to reduce trucking costs and delays.”

Trains carrying intermodal containers will interchange at El Paso, Tex., to and from FXE, Mexico’s largest railroad, which will operate the trains between the border crossing and Silao five days a week. Silao lies very roughly halfway between Guadalajara and Mexico City, the nation’s capital and Ferromex’s headquarters city.

“Mexico is the United States’ third largest trading partner with a yearly trade of just over $500 billion. This translates into 14,000 trucks crossing between our borders on a daily basis,” said FXE Chief Marketing Officer Fernando Lopez. “We created this intermodal train to serve such a market, delivering not only a consistent and reliable alternative, but a solid competitive advantage for North America as a region.”

Both railroads assert that the new service “is better at the border when compared to trucking” because there is no cross-border trucking across congested highway bridges. Southbound shipments are moved in-bond (which means shipment documentation is handled at the final destination) to minimize Mexico Customs clearance delays. Once the shipments arrive in Silao customers can clear their cargo with the customs broker of their choice through Mexico Customs. Northbound shipments are pre-cleared by a customs broker of the customer’s choice with U.S. Customs, the companies said.