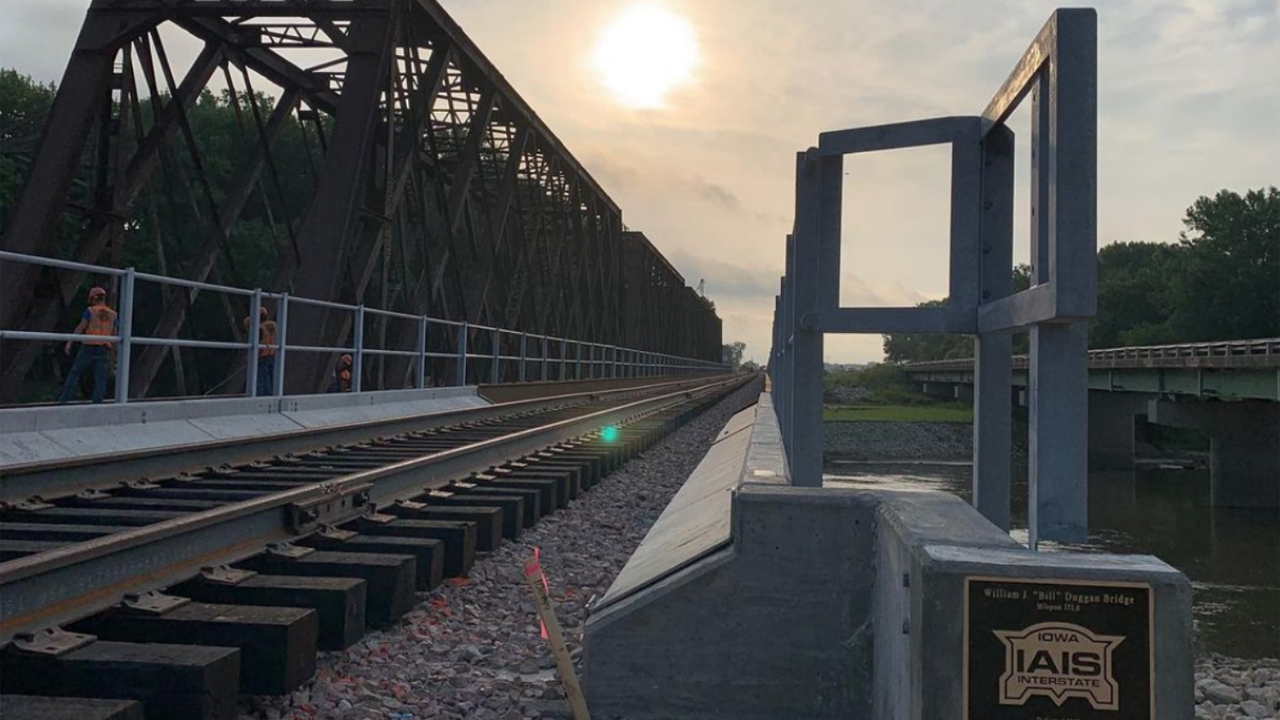 A $3.47 million CRISI grant made replacement of the William J. “Bill” Duggan bridge by the Iowa Interstate Railroad (IAIS) possible. The new bridge opened to freight rail traffic on June 30, 2020.

ASLRRA PERSPECTIVE, RAILWAY AGE, AUGUST 2021: The New Jersey School of Architecture offers a master’s degree in infrastructure planning. In preparing for his course on infrastructure, Professor Alex Marshall used Google’s Ngram Viewer, which can search millions of books and publications to determine when a word was first used. He found that the word “infrastructure” made its first appearance in French publications in the 1880s in conjunction with railroad engineering.

Today, “infrastructure” has become the rhetorical justification for all manner of federal spending programs. Many of those programs are certainly meritorious and result in economic and societal benefits. But, in deference to infrastructure’s etymology, it is worth noting the state of play with regard to federal railroad infrastructure grant programs.

From the short line perspective, the most important of these is the Consolidated Rail Infrastructure and Safety Improvements (CRISI) Program. CRISI is the only federal railroad grant funding program where short line railroads are directly eligible to apply. This eliminates the inevitable delays and red tape associated with routing funds through various levels of state and local government.

Since CRISI grants were first approved in 2017, 84 short lines have received more than $520 million in federal investment. These funds have been used to rehabilitate track, repair or replace aging bridges, improve grade crossings, and eliminate bottlenecks.

For short lines required to meet the federal government’s PTC mandate, CRISI grants made a critical contribution to costs that were otherwise out of reach for these small businesses.

Although Congress still has many hurdles to clear before enacting infrastructure legislation, and significant substantive and process disagreements remain, what has been put forward on CRISI funding so far is quite encouraging. The House-passed infrastructure bill authorizes CRISI funding of $1.4 billion annually over five years for a total of $7 billion. The Senate Commerce Committee-passed version authorizes $1 billion over five years for a total of $5 billion. And the Bipartisan Infrastructure Framework (BIF) envisions CRISI funding of at least $5 billion over “baseline.” Legislative text for the BIF is still forthcoming, and the Appropriations Committees have the final say on how much of the “regular” surface transportation authorization numbers will be funded, but all of these numbers are many times higher than the current FY 2021 CRISI appropriation of $375 million. This provides an indication of the strong Congressional support for expanding this successful program. And in the more immediate future, on July 12, the House Appropriations Subcommittee responsible for CRISI funding levels approved $500 million for FY 2022, a 33% increase over last year.

In the authorization bills, while short lines are excited about the funding levels, we are concerned over the House-approved provision, which adds a new 25% “large project” set-aside for projects over $100 million. This will divert a disproportionate amount from short line projects, and also the provision adding commuter rail eligibility. No such set-asides or new eligibilities are provided for in the Senate bill, and we are hopeful those policies will prevail.

The value CRISI funding for short lines brings to the table is fourfold:

• First, it leverages substantial private funding that would otherwise be inadequate to take on the project. Successful short line applicants typically match between 30%-50% of the federal grant with their own funds. Railroad projects are very expensive, so combining the CRISI grant with the railroad share is what makes the project feasible.

• Second, CRISI projects are building infrastructure assets that will last for decades. Likewise, the economic and safety benefits will continue for that long period as well.

• Fourth, the primary beneficiary of these projects are railroad customers. There are some 600 short lines across the country, but they serve more than 10,000 shippers who require a short line railroad to keep them connected to the Class I network. Those shippers benefit from more competitive, more flexible and safer service when their local railroad improves its infrastructure.

Consider this example of a $3.47 million CRISI grant that made replacement of the William J. “Bill” Duggan bridge by the Iowa Interstate Railroad (IAIS) possible. This 121-year-old bridge serves Elite Octane in Atlantic, Iowa. Elite Octane CEO Nick Bowdish calls it a critical piece of infrastructure for his business: “We ship 8,000 carloads annually of dried distillers’ grain, a highly nutritious livestock feed, a majority of which goes over that bridge. If that bridge goes out, it would have a multi-million-dollar impact on the efficiency and cost competitiveness of our business.” IAIS produced a video summary of the project and the shipper benefits that you can view above. It is an example that can be repeated by virtually every shipper whose short line is a beneficiary of the CRISI Program.

The William J. “Bill” Duggan bridge was built in 1900, just a few years after the word “infrastructure” was first used. The new bridge is likely to last another 100 years. That is very real infrastructure with a lot of bang for the buck. Programs such as CRISI will give the short line industry the ability to duplicate that kind of success across its 50,000-mile network for the benefit of thousands of shippers.