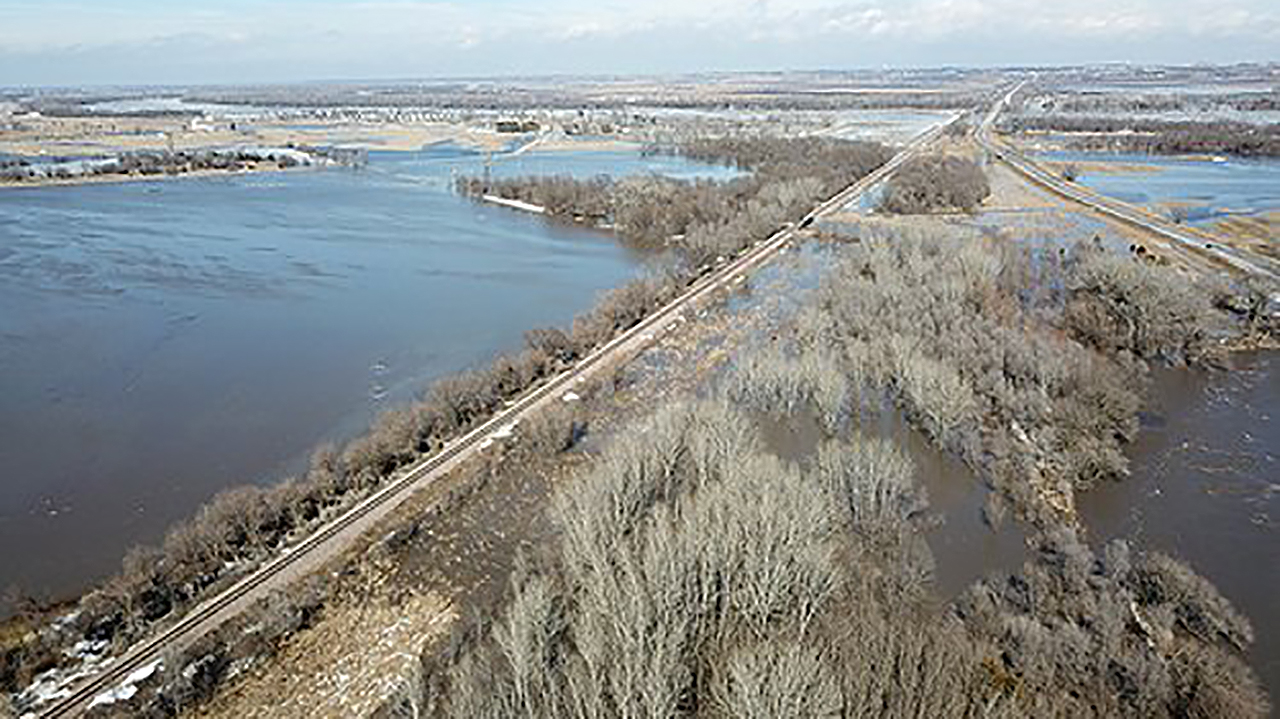 Flooding along the Creston Subdivision near Louisville, Neb.

BNSF is engaged in service recovery efforts in multiple areas across its network in the northern and central Plains following another major winter storm. Blizzard conditions, with wind gusts to near 70 mph in Colorado, Wyoming, Nebraska, North Dakota, South Dakota and Minnesota have caused significant train delays since March 14. With the temperature rising, BNSF is now confronting major flooding issues in the region, particularly in eastern Nebraska and western Iowa, as multiple subdivisions are currently out of service due to track washouts.

“With heavy rain and warmer temperatures from the storm accelerating recent snowmelt in the Missouri River Valley, as well as contributing to ice jams on area rivers, historic flooding has resulted in many locations,” BNSF noted. “Thousands have been evacuated from low-lying areas as water levels continue to rise.” 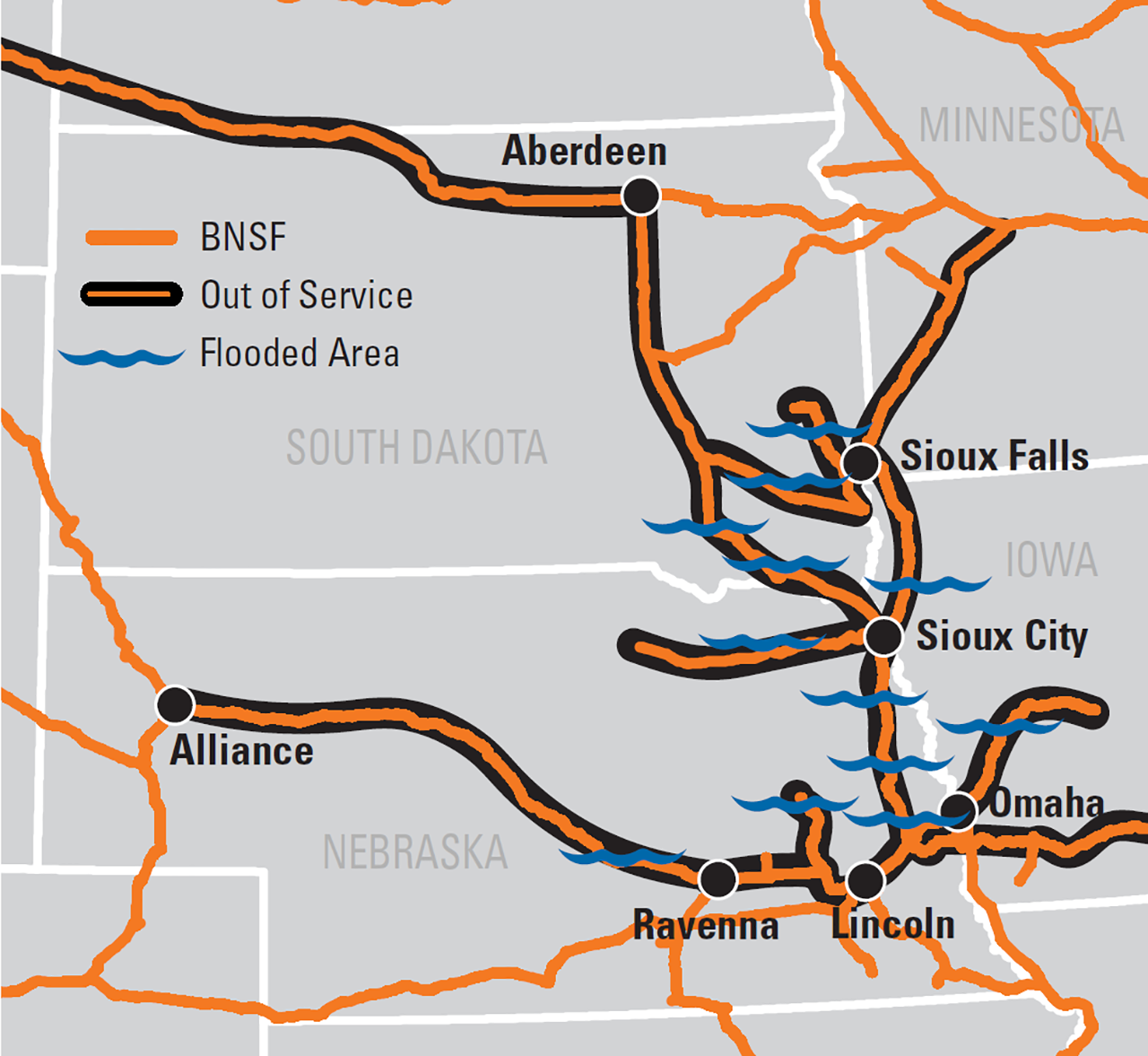 BNSF crews are assessing main line locations impacted by flooding and are making the necessary repairs where possible to restore service. “With the current extent of the flooding, service outages may continue in some locations for an extended period,” the railroad said. “The latest major storm has hindered our progress in generating improved service performance in our North Region. The number of total trains held has increased significantly. While key performance indicators were positive versus the previous week, velocity and terminal dwell remain below average levels from March of last year. We continue to work with customers impacted by these service interruptions.

“To support optimal conditions at all intermodal facilities, trucking partners are encouraged to park in the designated spot identified on their J1 receipt,” BNSF said. “Drivers who are unable to park according to the instructions may park in a nearby space and update their location through BNSF’s RailPASS Mobile App, or by alerting the DAB (Driver Assistance Building). Drivers who do not follow parking instructions and block nearby parking stalls, roadways or aisles could be kept from entering a facility on their next visit.”

BNSF said that anticipated Mississippi River flooding may impact service beginning March 18 on its Hannibal and River Subdivisions, where main lines run adjacent to the river in Missouri. BNSF Heartland Division teams have implemented procedures, including the re-routing of some traffic, to mitigate impacts from this expected disruption. However, favorable operating conditions are expected across the western U.S. during the next several days. With no major storms in the forecast and temperatures at or near normal levels across its Northern Corridor, BNSF operating teams “will continue to focus on normalizing service through impacted areas.” 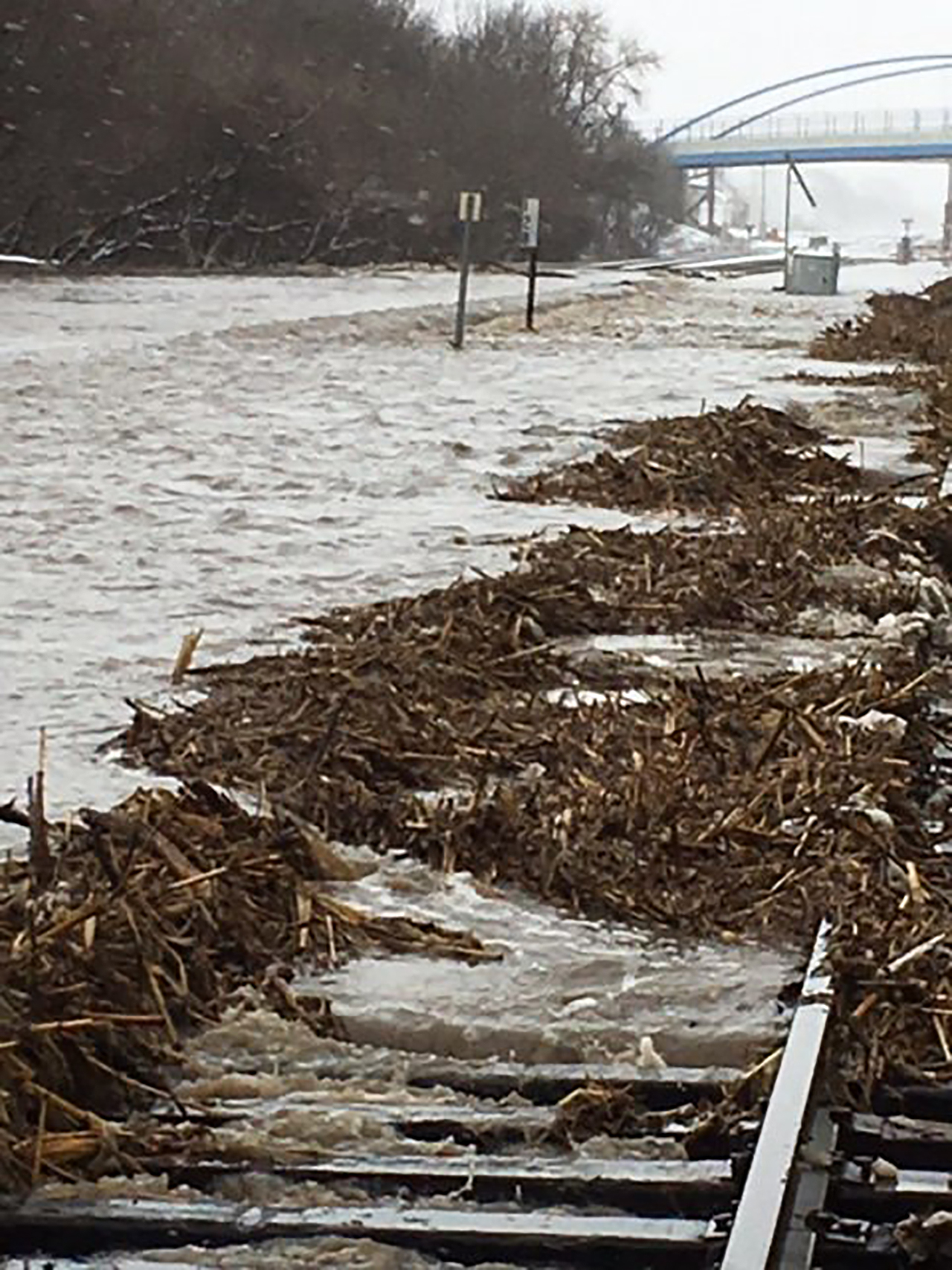 Flooded track on the Sand Hills Subdivision near Ravenna, Neb.