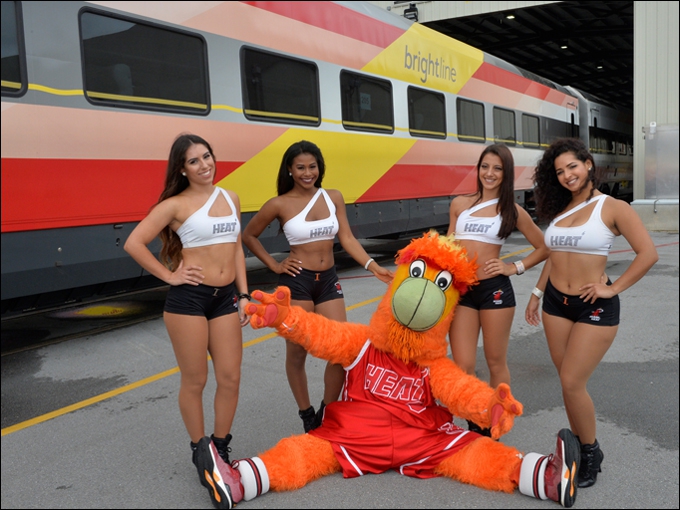 BrightLine, the privately-funded passenger rail start-up, took delivery of BrightRed, its fifth trainset, and announced a marketing partnership as the official train service of the NBA’s Miami Heat.

The U.S.-assembled trainset was delivered by Siemens USA from its Sacramento facility to Brightline’s Workshop b in West Palm Beach.

Brightline parent AllAboardFlorida, a unit of Florida East Coast Industries, plans to begin service this year between Miami and West Palm Beach, but has yet to announce fares.

“It is exciting to partner with one the NBA’s most respected franchises,” said Brightline Chief Executive Dave Howard. “Traveling to and from Heat games and events at the AmericanAirlines Arena will be much easier and more convenient for our guests than sitting in traffic trying to get to the game on time.”

AmericanAirlines Arena, which is part of the partnership, is near BrightLine’s MiamiCentral station.

“Our partnership with Brightline will offer Heat fans and AmericanAirlines Arena guests a new opportunity to get in and out of downtown Miami comfortably and in style,” said Kim Stone, Executive Vice President of the Heat and General Manager of AmericanAirlines Arena. “With more people living, working and playing in downtown Miami, collaborating with Brightline to address the transportation needs of our guests is a huge step in the right direction.”