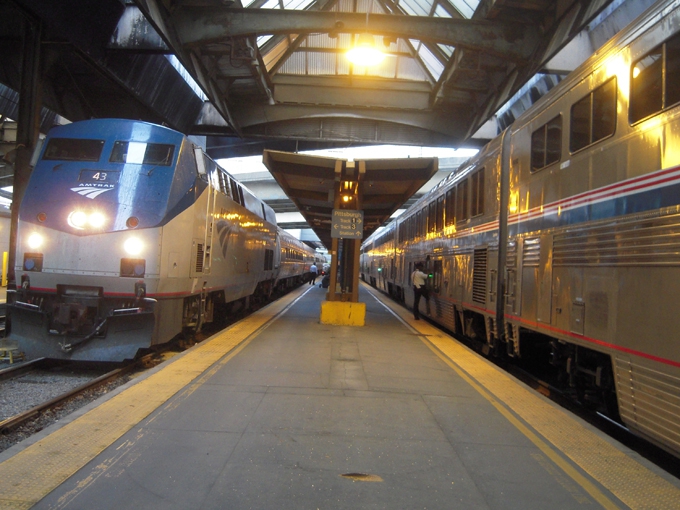 The Pittsburgh Downtown Partnership has released its testimony from a Aug. 23 hearing regarding increasing rail service to western Pennsylvania. “I think it’s one of the first times that Amtrak, PennDOT and Norfolk Southern were all at the same table answering questions from legislators on this issue,” says Lucinda Beattie, Vice President of Transportation for the Pittsburgh Downtown Partnership, a business advocacy group focused on the revitalization of Pittsburgh.

Following the Great Recession of 2008, Pittsburgh risked losing its one daily passenger rail connection to eastern Pennsylvania. Now, discussions have begun to increase frequency to three daily trips, over the Norfolk Southern rail line that connects Harrisburg to Pittsburgh.

The Pittsburgh Downtown Partnership produced a report in 2014 advocating for this additional service, entitled On Track to Accessibility. The report estimates the additional service would cost between $10 million to $13 million per year.

Earlier this year, PennDOT asked Amtrak to determine these cost estimates. Norfolk Southern says it will participate in these discussions.

Beattie’s full Pittsburgh testimony is below:

“I am here today to express the Pittsburgh Downtown Partnership’s full support for additional passenger rail service on the Keystone West line between Harrisburg and Pittsburgh. We believe this project should receive the highest priority of the Pennsylvania General Assembly and of PennDOT as it provides access to more transportation choices for those traveling between eastern and western Pennsylvania.

“Three years ago as the Passenger Railroad Investment and Improvement Act of 2008 was being implemented, those of us in western Pennsylvania were faced with the very real possibility that PennDOT would not fund our one daily passenger rail connection with the East Coast. Today we are here because, not only were we able to save the Pennsylvanian in 2013, but also because communities along the route now want to add two additional daily trains to the existing one daily train.

“In 2014 the Pittsburgh Downtown Partnership, working with Western Pennsylvanians for Passenger Rail, developed an affordable and implementable proposal for adding this additional service. I would like at this time to submit a copy of that proposal, On Track to Accessibility, into the minutes of this hearing.

“Our proposal assumes that PennDOT would need to make a capital investment in new rolling stock amortized over 30 years, maintain certain fixed costs that would now be spread across all three trains instead of one train daily, and pay Amtrak the cost differential between fare revenues and operating costs. Our estimate of what it would cost to implement three daily trains along the Pennsylvanian route is $10M – $12.9M annually and we estimate that ridership, currently at 232,000 annually, would double to well over 414,000 annually. To put this cost into perspective, constructing a 4-lane highway in a rural or suburban area costs $4M – $6M per mile and $8M – $10M in an urban area. This project is not only affordable but it is very reasonable.

“We know that other state departments of transportation, in particular those in Virginia and North Carolina, have worked with Amtrak and Norfolk Southern to successfully add service to their state-managed passenger rail routes. Virginia today has six state-sponsored passenger rail routes and is adding one to Roanoke in 2017, the construction for which began in November 2014. Where there is an existing rail line and some basic rail infrastructure, implementation of additional service is not a generational aspiration.

“What is needed is political will on the part of the State and cooperation among PennDOT, Amtrak and Norfolk Southern. The challenge for us as Pennsylvanians is to ensure that we successfully work together to bring this level of passenger rail service back to Western Pennsylvania.

“In closing, the Pittsburgh Downtown Partnership appreciates this opportunity to bring our proposal for two additional passenger rail trains before this Committee. We look forward to continuing to work with you on this project and stand ready to assist you in any way we can.”