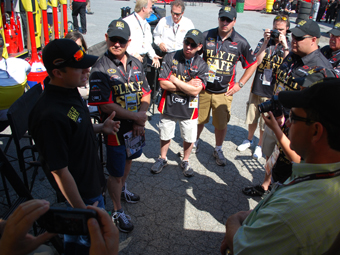 Railroaders and racers have many characteristics in common. Two of them are teamwork and tenacity. When trouble strikes, they rise to the occasion and band together, working safely and efficiently to recover and keep going.

For a railroad, it’s getting train operations back to normal (or as close to normal as possible) following a service interruption caused by such factors as a derailment, grade crossing collision, or natural disaster. For a NASCAR Sprint Cup team, it’s getting the car back out on the track after a wreck or mechanical failure, to continue earning points.

That’s exactly what happened on June 3 at the FedEx 400 benefiting Autism Speaks at Dover International Speedway—the “Monster Mile”—when Regan Smith and the No.78 Furniture Row Racing/CSX Play It Safe Chevrolet were involved in a multi-car pileup early on, sending the badly damaged racecar to the garage for extensive repairs. The Monster had indeed wreaked his havoc, but Smith, thanks to a crew that worked like a well-oiled machine, muscled his way back to a 27th-place finish after falling more than 90 laps down.

As the 43-car field was getting settled in for the grueling 400-mile, 400-lap race, a flurry of spins and crashes erupted on the back stretch of the challenging all-concrete oval. The 13-car wreckfest started when Tony Stewart (14) and Landon Cassill (83) made contact coming out of Turn 2. Smith, who was trailing Stewart, ran out of room and rammed into Stewart’s Chevy, causing a chain reaction. Juan Pablo Montoya (42) broadsided the 78, which suffered major damage to its nose, left side, and tail. CLICK HERE TO VIEW A VIDEO OF DOVER’S “BIG ONE.”

Smith, always a class act, initially took the blame for the wreck, but Stewart quickly countered and acquitted Smith of any wrongdoing.  “It wasn’t Regan’s fault—he was right behind us and he didn’t have anywhere to go,” explained Stewart. “The No. 83 (Cassill) was trying to get back down to the bottom and we were just in the wrong place at the wrong time.”

After Smith drove his heavily damaged car to the garage for lengthy repairs, he gave his view on what happened.  “I got into the back of the No. 14 (Stewart) and started the whole thing,” stated Smith, who qualified 26th. “I will take full blame for that. Somehow they got checked up in front of me. I just didn’t have time to slow down. I hate that there are so many wrecked racecars here. It’s not fun for anybody, especially my guys on the Furniture Row/CSX Play it Safe Chevy.” 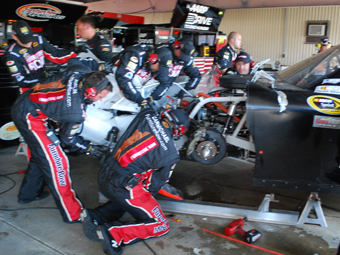 The wreck, which was the biggest of the season up to that point, forced NASCAR to red-flag (stop) the race for nearly 20 minutes. The Furniture Row Racing crew went to work to repair the crippled racecar, forming two coordinated teams, one working on the nose, the other on the tail. The Crash Cart came out with all the materials needed to patch the car back together. The entire front clip—fenders, radiator and radiator support, frame rails, hood, and nosepiece—had to be replaced. The tail needed extensive “bandaging,” accomplished with pieces of sheet metal, rivets, flexible adhesive patches, and lots of racer’s tape. The suspension set-up had to be redone, with the proper caster/camber and toe settings for the steeply banked Dover oval. The 20-minute red flag bought the team some time, but not much. 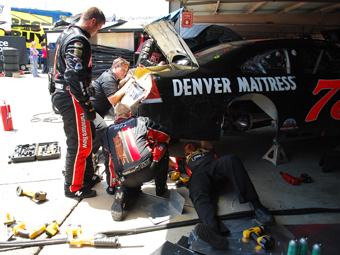 Within 45 minutes, Smith and the 78 roared back onto the track and returned to action, positioned in 37th place. He went on to gain 10 additional spots even though he finished the race 94 laps down. “What is really shocking is to finish that many laps down and still post a 27th-place result,” noted Smith. “Though I am disappointed to get knocked out of contention early, I am proud of this Furniture Row Racing team for their hard and talented work to get me back on the track.”

The finish dropped Smith from 23rd to 25th in the Sprint Cup driver point standings. He is one point out of 24th and 10 out of 23rd. “All I can say is that I am leaving Dover with a lot of pride due to how hard this entire race team worked to salvage a 27th-place finish today,” said Furniture Row Racing crew chief Pete Rondeau. 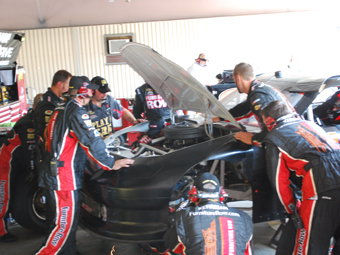 Smith started 26th in the FedEx 400 benefiting Autism Speaks. In the qualifying session, his No. 78 Furniture Row/CSX Play it Safe Chevrolet covered the all-concrete oval in 23.009 seconds at 156.461 miles per hour. “That’s not what we wanted and have a lot of work to get done before tomorrow’s race,” said Smith immediately after qualifying. “We’ve been struggling to get the car to my liking all the way through the corner. We obviously will need to move forward as quickly as we can because the leaders are going to be there before you know it.” 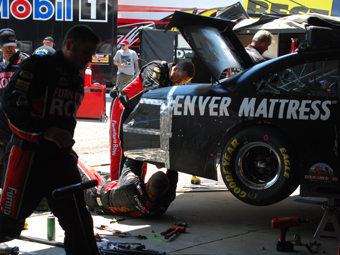 The FedEx 400 race winner was Jimmie Johnson. Rounding out the top-10 in order were: Kevin Harvick, Matt Kenseth, Dale Earnhardt Jr., Clint Bowyer, Aric Almirola, Martin Truex Jr., Joey Logano, Kasey Kahne, and Marcos Ambrose. The race saw one red flag and seven cautions for 32 laps. There were 17 lead changes among seven drivers.  The next Cup race is Sunday (June 10) at Pocono Raceway in Long Pond, Pa. The next and final CSX-sponsored race for the Sprint Cup 2012 season is June 30 at Kentucky. 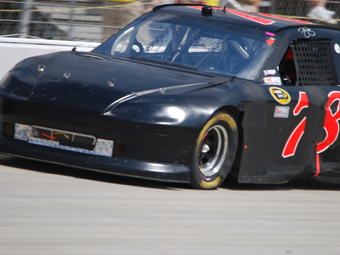