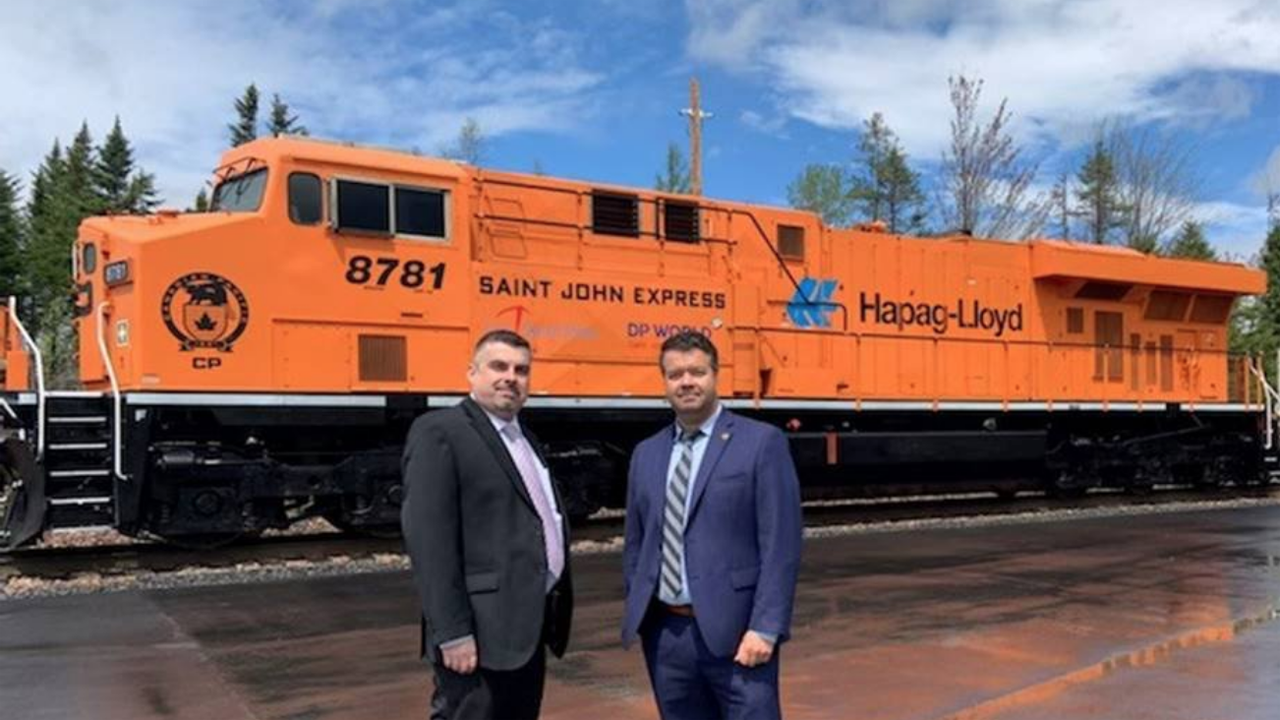 “CP celebrated the opening of a new border station in Jackman, Maine today [May 17] with @CBP & @HapagLloydAG. This new live lift operation will help create a seamless service between @PortSaintJohn & terminals in Canada & the U.S.,” the Class I railroad reported on Twitter. Pictured: Hapag-Lloyd’s Jason Tock (left) and CP’s Todd Ferland. (Photograph Courtesy of CP via Twitter)

With Canadian Pacific’s (CP) support, U.S. Customs and Border Protection (CBP) has opened a new freight inspection facility that the Class I railroad says “will help to create a seamless flow of goods across the border between Quebec and Maine.”

CP on May 17 celebrated the launch of the facility, located in Jackman, Maine, with officials from Hapag-Lloyd, DP World (the operator of Port Saint John in New Brunswick), and CBP, as well as Sen. Susan Collins (R-Maine) and representatives from the town of Jackman, among others.

“For more than a century beginning in the late 1800s, CP operated trains across the Canada-U.S. border near Jackman, Maine,” the railroad reports. “The corridor was sold to a short line in 1995. In 2020, we reacquired the line with the purchase of the Central Maine & Quebec Railway [Railway Age’s 2016 Regional Railroad of the Year, which links with Eastern Maine and New Brunswick Southern]. This critical route connects Port Saint John, N.B., and inland points on CP’s system, including Montreal, Toronto and Chicago. We are already realizing significant growth in the corridor. For example, ocean container line Hapag-Lloyd began operating weekly service through Port Saint John in 2021 and recently announced [April 25] it will add a second seasonal weekly call.”

Adjacent to the new border station is a “live lift” operation, which the Class I railroad says allows it to remove individual containers from trains when CBP flags them for inspection. “Similar to the Portal, N.D., live lift, which opened in 2017, the Jackman live lift means only containers flagged for inspection need to experience delays incidental to the inspection process,” CP explains. “Previously, entire railcars would need to be set out. Since intermodal well cars are often connected in sets of up to five platforms, as many as 15 containers could be delayed for a day or more each time CBP ordered a single container inspected.” The railroad points out that “camera and access controls help to protect the integrity of customer goods while at the facility. CBP’s cargo inspections occur indoors within a well-lit inspection bay. In addition, on-site customs officers can interact directly by computer with the local CBP port of entry when additional information is needed to enable cargo release.”

“CP and CBP each have important roles to fulfill at border crossings,” CP Senior Manager Trans-Border Strategy Service Allan Schepens says. “It’s our role to move goods for our customers. It’s CBP’s role to safeguard the border while facilitating the flow of legitimate trade. Our collaboration on the Jackman border station exemplifies how companies and government agencies can work together for the benefit of the supply chain and the larger economy.”

“As a cross-border company, we need to be experts at getting shipments between the two countries safely and efficiently,” he continues. “The investments we’ve made at Jackman show our commitment to that.”

In related news, the government of Canada on May 25 announced it would contribute up to C$21 million to the Saint John Port Authority to increase the cargo laydown capacity of the West Side Terminal, to enhance the crane capabilities of the terminal, and to add roll-on/roll-off capabilities for wheeled cargo.